With the holiday rush and typical hustle and bustle, it'd not hard to feel the crunch of holiday commitments.  You owe yourself a little time to kick back, relax and laugh.  So, pull up a chair at The Portland Center Stage at the Armory and make time for this festive and fun cult classic, The Santaland Diaries.   (If you are not familiar with "The Santaland Diaries", it started as a composite of journal entries from the [then unknown] humor and satire writer, David Sedaris.  His gig as an elf at the iconic Macy's Santaland forever changed his career when he was invited to read his journal entries on NPR's Morning Edition in 1992.)   The story has been adapted for the stage by Joe Mantello, directed by Wendy Knox, and the star of this one-man-show is Darius Pierce.

When I first set foot in the beautiful Armory in downtown Portland, I was blown away by how grand it was inside.  The outside architecture speaks to me with its history having been built in 1891, but the inside is not rough like the stone and brick, fortress-like walls outside… No.  The inside shone with its sophisticated, industrial design.  The concrete floors gleamed and extenuated the polished wood floors and shining banisters on the stairs.  The ceiling is soaring high above with its open floor plan and dangling Edison lights.    The great hall is incredibly elegant and sophisticated but still full of its antique charm.  The Santaland Diaries is presented two floors below at the Ellyn Bye Studio.   The “black box” theater can seat up to 199 people with a flexible seating plan that may change from play to play.  For this reason, all tickets are general admission seating, however the theater is small and intimate.  I don’t think there is a “bad seat” in the house.  I did arrive about 20 minutes early and sat in the middle of the room facing the heavy, red velvet curtain with a Christmas tree or two and several over sized presents. 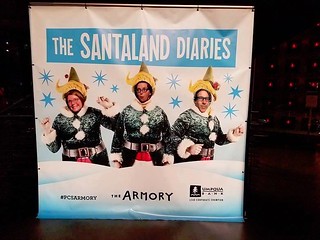 When the lights dimmed and the play began, Darius was captivating, hilarious, and completely believable as he swept me along with him on his self-deprecating journey through the maze of unemployment to treading around in green velvet knickers for the amusement of others.  I am a big David Sedaris fan and Darius and the creative team at Portland Center Stage did not disappoint.  In fact, they were able to stay true to the original creative genius while breathing a new sense of life into my favorite holiday past time, even adding a bit of shock and humor at the beginning of the production.  I’m not going to give anything away, but it is stated on the webpage that the production is recommended for ages 14 and up due to mature content and language.  And, if you didn’t know already, the secret of Santa and his existence is sorta exposed.  I’m sorry if that last sentence just crushed some happy reader out there.

Going For A Run:

The Portland Waterfront (Tom McCall Waterfront Park) is just under a mile away if you’d like to take a stroll or run “the waterfront loop“.