It's hard to think of a better way to start the Fourth of July than to run a 5K race and then eat pancakes. Lots of people agreed with me, as close to 400 runners showed up for the Freedomthon 5K in Beaverton. I previewed the race a few weeks ago, and now I'm here to recap it.

I didn’t have time to bowl, but I did make a short video where I rated the numerous Uberthons race shirts that I’ve collected over the years. The guys at Uberthons add some extra touches to the video, and it’s available here if you’re curious.

Arrival on race day: I had been thinking that the race started at 8 a.m., but just before going to bed on July 3, I checked the Uberthons website again and discovered that race time was 8:30 a.m. (It’s hard to explain how I made this mental error, considering that I wrote the preview for this race and had the correct starting time there.) Anyway, my thought at the time was, “Woo hoo!” I immediately reset my alarm clock to get an extra half an hour of sleep…. 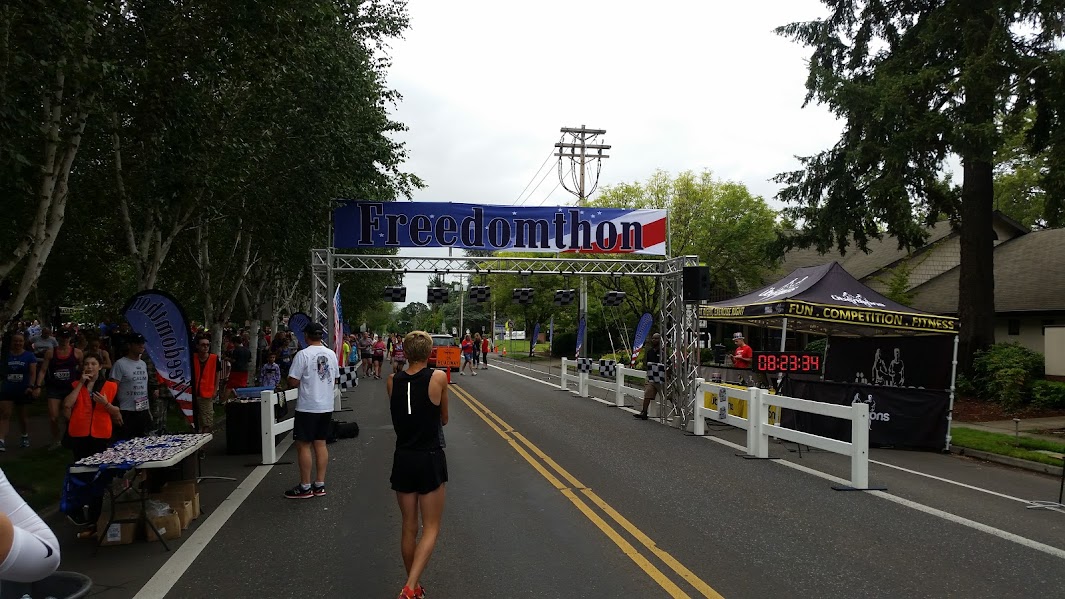 The start/finish line of the Freedomthon

Not surprisingly, traffic was incredibly light at 8 a.m. on a holiday morning when most stores were closed for the day. I arrived at the Beaverton Public Library around 8:20 a.m. and found parking easily in one of the library lots. As I headed over to the staging area, I could hear the national anthem being sung. (I didn’t learn this until later, but apparently there hadn’t been anyone scheduled to sing the anthem; one racer asked for the microphone impromptu and belted it out.)

It was completely overcast, about 59 degrees, with calm air. Basically, it was perfect running weather, which meant I was wearing shorts and a short-sleeve tech shirt. It also meant that some others (ahem, fellow Run Oregon blogger Brian Bernier) were shirtless….

Coming into this race, I was hoping to run under 22 minutes, which wouldn’t be a PR, but would represent continued improvement this year after a three-month near-layoff from running to recover from Achilles tendinitis. I was feeling pretty good that morning, with little of the usual pre-race jitters that I normally get. In the starting area, I saw Brian, Ross and Kirsten Crowley, and Brent Huber and Eileen Kuffner. Lots of familiar faces!

Darwin asked a holiday-appropriate pre-race history question: “Which general was responsible for winning the Revolutionary War?” I was an economics major (and more toward the mathy-side of economics), not history, so while the obvious answer was George Washington, I wondered if there was some trick, as in a subordinate general who was the true mastermind.

“George Washington!” Darwin announced. With that history reminder, it was time to race!

The race: We started in the usual waves of about 20 or so. As a measure of my growing confidence in my recovery, I positioned myself in the second wave, leaving the first one for the elite and sub-elite runners like Brian.

We had the entirety of SW Fifth Avenue open to us, so clogging was not an issue at all. It was completely safe, as Beaverton police blocked the two major intersections at Hall and Lombard.

I got off to a fast start (I always do this, no matter how much I tell myself not to), and when I saw that my GPS watch had me at a sub-6:00/mile pace through the first 1/4 miles, I forced myself to dial back even though I was feeling pretty good still. Periodically I checked my watch to see that my up-to-the-moment race pace was slowing gradually to something more sustainable.

At that point, there were four runners way in front, and then a big clump (including me). The 1 mile marker came up earlier than I expected, since I had described the route as 1 straight mile, turn, 1/2 straight mile, etc. My watch buzzed at the same point; Uberthons is pretty tight on the placement of mile markers. I had covered the first mile a little faster than I had in my previous 5K (on the slower Cook Park course). How I managed the next mile would tell me a lot about my state of fitness.

The first half of the second mile was the stretch down SW Western. I saw eventual winner Nico Banks leading the pack, and then several seconds behind, Brian Bernier, Kolby Greiner, and Jacob Stirpe. I stopped counting how many people were ahead of me, though I recognized Ross Crowley and fellow Run Oregon blogger Rachel Peters among them.

The water/aid station was at the turnaround, but on a cool, overcast day, I didn’t need water, especially for a short 5K. I hit the turnaround and started back, and now it was my turn to see more runners headed toward the turnaround.

Jason Kentner (#28) carries the U.S. flag to the finish line

The mile 2 marker passed by so quickly I didn’t even notice it. My second mile had gone a lot better than the last race – about 20 seconds. I traded places with a few runners over the next 1/2 mile or so, getting passed, and then slowly catching back up and passing them. The end point of this race always looks closer than it is when you first spot it, so I didn’t try to speed up until my watch read an elapsed distance of 2.85 miles.

I had to slow to grab one of the offered U.S. flags. There were two volunteers handing them out on either side of the course, but both were occupied with runners a step ahead of me. Once I had my flag, I kicked into a sprint and crossed the finish line, well under 22 minutes. My Achilles tendon did not hurt, so I judged it a successful race.

Post-Race Festivities: It’s becoming the norm to eat, if not feast, after Uberthons races, and the Freedomthon was no exception. Each runner received a card good for breakfast as well as a free game of bowling at Big Al’s and discounts from Accelerated Sports Medicine, Famous Footwear, and Road Runner Sports. Non-racers were able to buy the cards at a kiosk for $5 (adults) or $3 (kids). Breakfast consisted of pancakes with choice of raspberry or strawberry toppings, or maple syrup, and whipped cream, as well as sausages. Lemonade was also available.

Brian Bernier offers himself up as a dunk tank target

There was also a dunk tank. This being a mild, cool day, the dunk tank wasn’t as popular as it would have been last year (when it was 64 degrees and sunny at the start of the race, and even warmer by the end). However, when I went over to take a look, Brian Bernier was sitting calmly in the tank, dangling his legs in the water. It was like a post-run ice bath, he said.

Well, there was a line of kids waiting to give him an ice bath for more than his legs. I got in line too. However, in front of me was Rachel Peters, who unleashed two wicked fastballs that barely missed the target. With her third and last throw, she threw a fastball that nailed the target! In went Brian …. When it was my turn, I too decided to throw hard. Unfortunately, I was unable to match Rachel’s deadly accuracy, and all of my throws just missed high. Here’s what Brian had to say:

Rachel and Tung, your enthusiasm to dunk me yesterday was a bit chilling. I can never see you in the same light again.

The zumba dance attracted a lot of people

That wasn’t all that was going on after the race. Kauro “Kimo” Metzler of Zumba Fitness took to the stage and provided a zumba lesson for everyone who was interested. From where I sat, eating pancakes and sausage (I waited a while before getting breakfast), it looked much like the choreography stage of “So You Think You Can Dance,” where the contestants who pass the initial audition are tested as a group in their ability to adapt to different dance styles. Pretty neat stuff!

But what if after all that, you were still hungry? I don’t think there were seconds allowed in the breakfast line, but there was another food opportunity …. That’s right, the pie eating contest. Race director/pie eating contest judge Darwin Rasmussen had invited me to take part in this post-race contest, but I demurred. I rarely eat that much after races, and I knew that the pancakes and sausage would be more than enough for me. Besides, I kept imagining the pie-eating contest from Stand by Me. Anyway, when all was said and done, the winner of the contest was Andy Cox (#155 in the red T-shirt on the very left in the first picture below).

Some of the pie-eating contestants (note hands behind their backs)

Finally, this was another of Uberthons’ belt buckle events, so all finishers got a belt buckle. Top overall finishers, 45+ finishers, and the top 65+ finisher also received awards, and age/gender group winners received pins. I noticed something neat about the lanyard for the belt buckle when I got home: it’s got the Declaration of Independence printed on the back in very small print!

The next Uberthons event is the Summer Marathon/Half Marathon.

Disclosure: I’m a 2016 Uberthons Ambassador, and I received a comp entry to run this race.