Run Oregon sometimes receives products to review. In this post, Run Oregon provides some initial impressions on some snack bars from Ally's Bars and EPIC Bars.

Ally Stacher has always been a foodie. She is always cooking up some of the most amazing concoctions in her kitchen. It was her love for food and adventure that lead her to creating 'Ally's Bar'. A unique blend of sweet potato, dates, quinoa, nuts, and berries combined with all natural Agave and coconut sweeteners, Ally's bar is as healthy as it is tasty.

Ally's bars are the creation of professional cyclo-cross racer Ally Stacher out of North Carolina. As someone who is all about participating in the highest levels of fitness, she wasn't totally cool with nutrition bars as they have come to be known - so she created her own. Her bars have enough sweetness (but not too much) and weigh in at 250 calories. All the ingredients are natural and have a very diverse flavor provile. 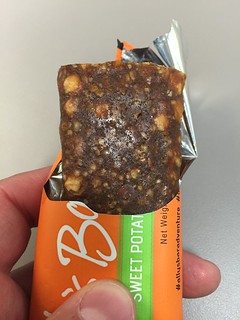 First of all, don’t be scared off by “sweet potato”. I personally love the veggie, but even for those who aren’t fans – I don’t think you will be disappointed. While it’s the base in all of the styles, there are enough unique flavors added in that it doesn’t feel overwhelming, even in the original bar.

The new flavors were created and rolled out this past June. Both the Apple Carrot Ginger and Pistachio Cashew Pumpkin Seed are definitely unique. They are more savory than sweet though they do have some sweetness to them. The Apple Carrot Ginger even has as a mini kick of heat. I wasn’t a huge fan after the first few bites of each, but I started to really came around over time and I ended up liking them more than I anticipated. But given the diversity of the flavors, I could see how they may not be for everyone though.

Ally’s Bar was recently featured in Runnerbox, a subscription box that we have reviewed before. If you are looking for something super natural and a little different, then give Ally’s Bar a shot. 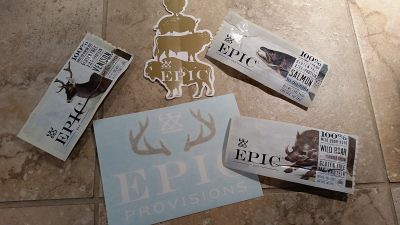 EPIC products got its name from simply being epic. Crazy, right?  Everything EPIC does is “inspired by the simple yet powerful diets of our ancestors and consistent with our unique evolutionary biology. The end result is flavor-forward, delicious, meat based protein snacks that taste EPIC.”

In a world of granola, oats, chocolate and nuts, EPIC bars are not the first thing that a runner might think to grab after a long run, but in looking at the list of elite athletes who endorse EPIC products, there is something special about these bars. I had the pleasure of trying three different flavors, including Venison, Salmon and Wild Boar. A good way to think of these bars is to picture high quality beef jerky, just without the greasiness that is often associated with them. While their appearance is not unlike jerky, their taste is unique.

When the bars arrived, my family was genuinely interested in trying all three and while the Wild Boar was a little different, the Venison and Salmon were absolutely amazing, so much so that we have purchased more of these two flavors. Each bite appears at first to be a little dry but that feeling is quickly replaced by the desire to have another bite. The pepper under-current in both the Venison and Salmon are strong but not over-powering. The Salmon is not overtly “fishy” and the Venison is off the charts good.

A recent article in Food Navigator helps provide a little backstory on company co-founders Katie and Taylor while also providing some company philosophy. Definitely check these products out in the near future, they are well made and full of flavor, while also being full of protein and good for you too!