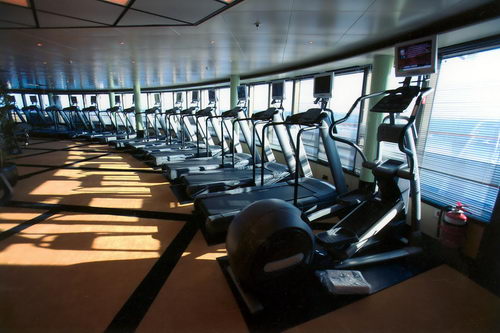 Winter is upon us. Fortunately, we don't get much snow at all in Portland (but this is Run Oregon, not Run Portland, so perhaps you are inundated with the white stuff). Even without snow, though, it can get frigid and wet. And rain all the time. Some runners are hardy enough to deal with adverse conditions outside. I am not one of those. I'll put up with cold and rain for a race, like the 2014 Fort Vancouver Run, or the first Oregon Marathon/Half Marathon in 2013 (known as the Typhoonathon). I don't mind misty drizzle. And if I'm suffering from cabin fever, I'll put on cold weather gear and brave sub-45 degrees. But I generally draw the line for training runs at any combination of too cold, too windy, and too rainy. I know some people can't stand treadmills, and I've written before about some benefits of treadmills. This column provides tips for enduring treadmill running.

Generally, running on the treadmill seems a little easier physically compared to running outside at the same pace outside on pavement. However, it’s a lot harder mentally. In some kind of nod to Newton’s theory of special relativity, time seems to slow in direct proportion to the duration of the treadmill activity. The temptation to hit “pause” or “stop” can be pretty strong, and it takes a lot more willpower to slog on than if you were outside, because if you run 5 miles out from your home and then you don’t feel like running any more, well, guess what – you’re still 5 miles away from home. You can walk or run back, but you might as well as run, as it’ll take less time. On the treadmill, you can just get off….

1) TV, TV, TV: The single best aid for treadmill running that I’ve found has been watching TV. In fact, I love the combination of TV and treadmills so much that I have a semi-active personal blog after those two things. I suppose you could include movies within “TV,” but I’ve found that traditional TV works better. That’s in part a personal preference of mine. It’s also due to the fact that movies last longer as a whole than a single episode, but not so compared to an entire season.

An hour-long episode of TV, stripped of commercials, runs about 42-44 minutes. Depending on your pace, that’s anywhere from 4 to 6 miles, or a decent workout. Stack two episodes for a long run. The beauty of the 42-44 minute structure is that, for the right kind of show, there’s a certain rhythm that parallels a running session. Dramatic TV shows tend to be written with 4-6 acts per episode, with each act building to a mini-cliffhanger. These lead into commercials, but for streaming purposes, there are no commercials – this simply gets you to “run just a bit more.” And as you near the end of the planned 45 minute run, the denouement of the episode pushes you to keep going even if you want to stop.

So far so good, but the best TV shows for running will spur you to come back for more the next day. Thus, I recommend serialized dramas. Not only does each act within an episode end in a mini-cliffhanger, but the episode itself typically ends in a cliffhanger.

“24” is the best example, and I have to say, there are few things that really get you running more than watching Jack Bauer deal with terrorists. But “24” is not everyone’s cup of tea. I actually think that in some ways, “Survivor” (the reality game show) is even better running-distraction. Although it’s a reality TV show, “Survivor” is carefully crafted to provide ongoing storylines, emphasizing conflict between contestants and foreshadowing mini-arcs. It’s also filmed gorgeously, showing exotic locations in stunning HD detail. Finally, the structure of each episode is not unlike that of dramas, with the beginning being a recap of the previous episode(s), and then a bit of the continuing storyline involving contestant interactions, and then about a quarter of the way in, a “reward” challenge consisting of a usually athletic competition. That’s followed by the reward itself, which is a period for relaxing before the upcoming immunity challenge – another athletic competition! And then it leads to Tribal Council, where one member will be going home.* The music swells as host Jeff Probst reads each vote, and then when he reaches the deciding vote and says, “The Tribe has spoken,” the music crashes to a solemn-sounding dirge.

* Except they don’t really go home. They get sequestered at a posh resort until the filming is done.

If you have Amazon Prime, there are a whole bunch of seasons of “Survivor” available for free streaming right now, including the first one, and the awesome “Heroes vs. Villains” season. Other shows that I’ve binge-watched while running on the treadmill: “The Shield” (FX; used to stream on Amazon); “Justified” (FX) (streams on Amazon).

2) Last person running: This one is kind of silly, and in some ways sounds unnecessarily competitive. But it can also be a good motivator, as long as you don’t throw common sense completely away. The idea is that in a gym with a row of treadmills, you don’t get off before everyone else has finished. Obviously this works less well if you are running in a huge gym with dozens of treadmills (and people using them), or if someone gets on a treadmill next to you after you’ve spent an hour (or two hours or whatever your threshold is) already. But in the right sized gym, it can get you to stay on for just a bit longer if you need the external motivation.

3) Speed workouts: Treadmills can be tough mentally because you’re just running in place, essentially, and there’s no scenery to enjoy the way that there is if you are running outside. If you use the treadmill for a hard enough speed workout, then you don’t really find your mind wandering – it’s too busy helping you hang on to finish the workout. Try something like 6 x 1/2 mile at your 5K pace, with 1/4 mile recovery (walk or jog as suits you, although here is a guide backed by some research).

4) Chatting with friends who run at different paces: I don’t really socialize with the people at the gym I go to, so I’ve never done this, but if you have a friend who goes to the same gym, and you find open treadmills next to each other, you can run and chat. The beauty of treadmill running in this context is that runners who have different easy paces can run together and talk, without one having to run hard to keep up with the other. You simply run at your own paces!

1 Comment on The Obsessed Fortysomething: Tips for enduring the treadmill