The forecast was for rain, rain, and ... even more rain for Saturday, December 21. Needless to say, I wasn't as excited as usual about rain, as I would be at the starting line for the Eugene Holiday Half & Hustle. At packet pick-up on Friday evening, I was doubting my sanity a little bit. Having previously committed to the half marathon, I downgraded to the 5k instead. I wasn't in the mood for running in the rain, as I usually am.

Saturday morning came around, and it was fabulous out! Blue skies and high clouds were present at the start line. I even had to wear my sunglasses! 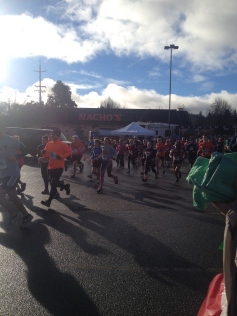 Eugene Holiday Half & Hustle Start Linestart line, and remained such throughout all race distances. The race was off to a great start.

The Eugene Holiday Half & Hustle started in the parking lot of Eugene’s local Applebee’s. Racers had the option to pick-up their packets on Friday night at Ophehlia’s Place, the charity selected for this event, or they could pick-up race morning inside Applebee’s. This was really clever, as the restaurant was closed to patrons at this time, so racers could sit at the tables and stay warm, as well as use the bathrooms inside.

At 9:45 a.m., the kids lined up at the start line to participate in their own race, which looped around the parking lot. At 10 a.m. sharp, the half marathoners started the race, many of which were dressed quite festively. There were a lot of great costumes that could have easily won the costume contest – glad I wasn’t a judge for it! Staggered three minutes behind the half marathon start were the 10k racers, and another three minutes later the 5k race started. This is the race I was participating in. I was exceptionally pleased (huge kudos Pink Buffalo Racing) that the race, and subsequent distances, started on time.

The course was really neat, as the half marathoners, 10k’ers and 5k racers were all traveling on the same

path (Fern Ridge Bike Path). The course had plenty of excellent volunteers, and at any road crossings two volunteers were present directing traffic. Candy canes were posted for mile markers, which was a festive touch.

At the 5k turn around point, we were treated to our first aid station. It’s always nice having an aid station located near the beginning of a race, as I usually participate in half marathons, and find the first aid station to be too far into the race. The first aid station for the Eugene Holiday Half & Hustle was located at approximately the 1.5 mile mark. Volunteers at the aid station were friendly, with plenty of water and Gu gels available to all racers.

As I looped around the turn around, and begun the race back to the finish line, I was finally getting warmed up and into the groove of racing, so I picked up the pace a little. My goal was to break the 30 minute mark for a 5k, as the 5k distance has typically been my worst for time/pace. Zipping back, I thanked the volunteers again for being there to support up, and direct traffic to make the race safe for all of us. Volunteering at a race, especially manning anything to do with traffic, is a “thankless” task. Thank you volunteers, we appreciate you! 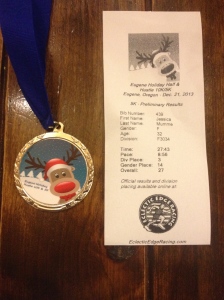 thrilled! After crossing, racers were treated to an incredible post-race celebration inside Nacho’s restaurant (which ironically, recently closed for business). Again, it was great to get out of the elements and be inside, even though it was sunny out! Inside, there was water, bagels, meat & cheese to make sandwiches, fruits, chips, dips, and mini sandwich rolls. Excellent job with the post-race refreshments, Pink Buffalo Racing! Very impressive. Also, finishers could get a print out of their preliminary results. I love these! Thank you for doing that, Eclectic Edge Racing! I tape it to the back of my bib so I have my race stats.

This is an excellent race, and one I was put on my calendar for 2014. It’s easy to park, get to, pick-up packets, and leave after the race. The age group finisher medals were lovely, as were the half marathon finisher medals! Excellent hooded shirts, too. Great, great, great job Pink Buffalo Racing!

Jessica Mumme, a Portland native, currently lives in Eugene with her husband and three cats (children). Her favorite distances are the 10k and marathon, but she will run any race distances, and especially loves competing in running events. She is Half Fanatic #2635, and has completed 42 half marathons since May, 2009. Jessica tackled her first ultra marathon distance at the 2015 McKenzie River Trail 50k Ultra. See her race calendar and other fun stuff at her personal blog, runjessica.com.