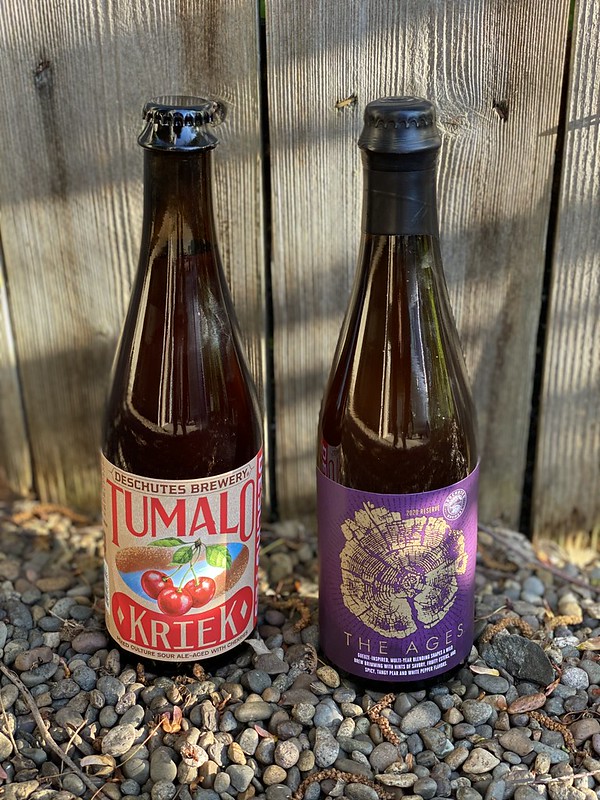 I love beer. After now having visited over 560 different breweries, it’s fair to say I have sampled a lot of beer (follow me on Untappd). From post-race pints and run club meeting locations, to beer miles and relays, running and the kegged nectar seem to go hand-in-hand in Oregon. Our Kegs and Legs feature is where beer drinking runners like me can go to find some new favorite beverages.

There are a few “macro” breweries out there that promote low-calorie beers as a way to cater to “fit” and “young” people. Maybe it’s being from one of the beer meccas, but even if those beers were zero calories, there’s no way in hell I’d sacrifice a local IPA or porter for it. But there is something to be said for lighter and lower calorie options out there. In the past few years, we have reviewed quite a few offerings from Deschutes Brewery, and the just sent us a few of their latest.

Before we jump into it, let’s start off again with a little snippet from our previous posts about Deschutes:

The first two beers – Tumalo Kriek and The Ages 2020 – are a part of their Reserve Series, which claims that “nowhere does our high-risk, high-reward mantra manifest like these small batches of audacious, experimental, outrageously coddled beers.” The Tumalo Kriek is relatively light on ABV (6.6%) and is full of Oregon Montmorency Cherries – giving it a a nice smell out of the bottle. It is aged for a staggering 27 months on neutral wine barrels and is a pretty complex beer. While the first sip yielded some tart flavoring thanks to the fruit, the back end seemed to come on more sweetness, and with less bite, than I was anticipating. While I enjoy sour beers – mostly kettle sours – my palate is less up to speed on wild ales / saisons. However the Kriek (which is listed as a “mixed-culture sour”) is very pleasant and I found very enjoyable on a warm weekend.

The Ages 2020 is another fruit-foward offering – though with pears sort of being the star of the show. It is a more carbonated offering when poured in a glass and is described as “Gueze-inspired, multi-year blending shapes a wild brew brimming with hints of savory, fruity esters, and spicy, tangy pear and white pepper flavors.” I got the pear flavor right off the bat, but the unique blending makes it much more interesting than a standard pear cider. Given the wordy description on the bottle, I was concerned it was going to be a little too much funkiness for me, but I found this beer to be surprisingly drinkable and pleasant all the way around.

The Neon Daydream is probably the most accessible of their new offerings – a limited release Hazy Ale. I drank it (via Zoom) with a buddy of mine and we agreed that it was much smoother than we anticipated it would be. I has the IPA body with the haziness evident, but finishes especially smooth on the back end. It is under 5% ABV and has a low 35 IBU, making it a very refreshing summertime treat.