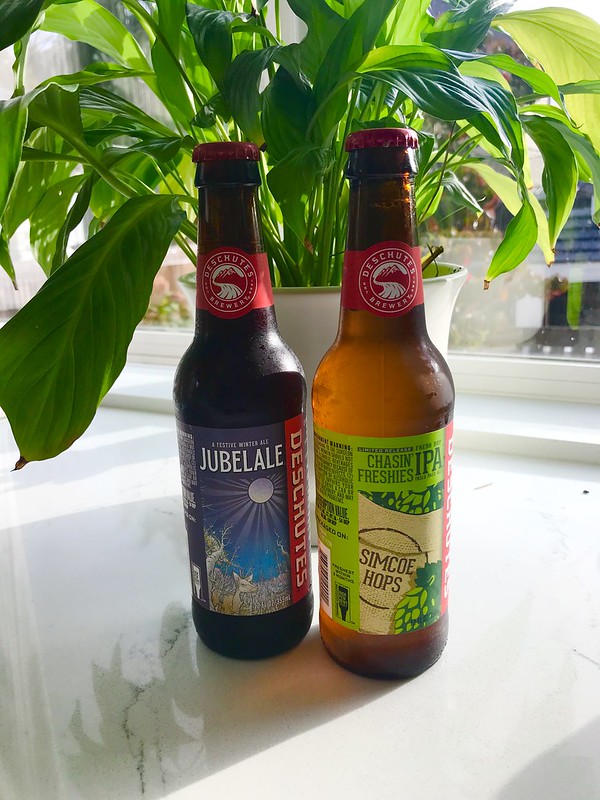 I love beer. After now having visited over 540 different breweries, it’s fair to say I have sampled a lot of beer (follow me on Untappd). From post-race pints and run club meeting locations, to beer miles and relays, running and the kegged nectar seem to go hand-in-hand in Oregon. Our Kegs and Legs feature is where beer drinking runners like me can go to find some new favorite beverages.

In the past few years, we have reviewed quite a few offerings from Deschutes Brewery. Now that autumn is officially upon us, we are sampling a few from their seasonal line-up – the popular fresh hop Chasin’ Freshies and Jubelale.

Let’s start off again with a little snippet from our previous posts about Deschutes:

Chasin’ Freshies comes around each October with the kickoff of fresh hop season. As a result, it’s always a little different from year to year. The 2019 version is definitely different than 2018, utilizing Strata hops in steady of Strata, and having a lower ABV and IBU level as well. For those who are unfamiliar with fresh hop beer, it’s essentially getting hops from the vine and into the kettle as quickly as possible. This brings out the flavor in what some see as it’s most pure form. I can be hit-or-miss on the styling, but Chasin’ Freshies is one that I always seem to enjoy. I found this year’s to be a nice balance of bitterness and floral and it’s a nice mid-road IPA that is flavorful without being overpowering. I think Deschutes really got it right with the 2019 version!

If you find these in your store, it’s already pretty late for fresh hop beers so buy and drink ASAP!

Seasonals are in full force around the brewery landscape, with creators slowly morphing from the lighter, summery beers into the season of warmer and darker beers that come with the changing of seasons. One of the more wildly known seasonals in the state is Jubelale from Deschutes Brewery, their winter Strong Ale that is in it’s 32nd brewing and the first ever beer to come from the famed brewery! The flavors change from year to year, but the essence of the recipe remains pretty consistent.

When I drink Jubelale, I just get in the mood for winter. It just draws forward warmth and a bit of spice that just screams to be sipped in front of a fire. Strong Ales aren’t for everyone, but it is a styling I have grown to enjoy more and more with each winter. And clearly Jubelale, with 30+ years of experience, is a good place to start. This year’s bottle design was once again created by a local Bend artist- Mark Rada and the design is to “humbly recreates what nature does best.”

Jubelale is available October – December, so check it out!