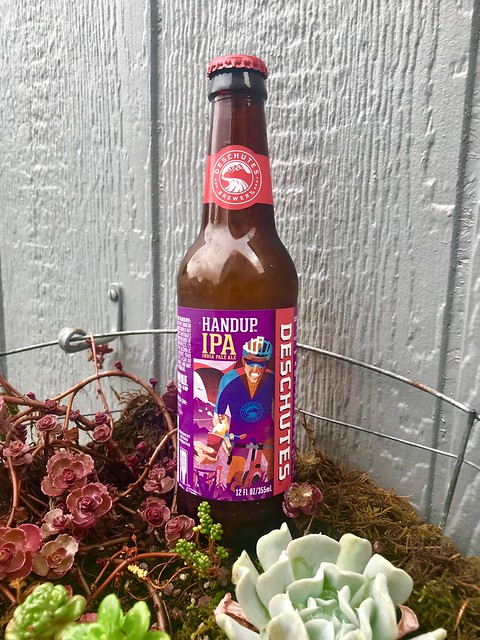 I love beer. After now having visited over 530 different breweries, it’s fair to say I have sampled a lot of beer (follow me on Untappd). From post-race pints and run club meeting locations, to beer miles and relays, running and the kegged nectar seem to go hand-in-hand in Oregon. Our Kegs and Legs feature is where beer drinking runners like me can go to find some new favorite beverages.

I don’t know about you, but Cyclocross sounds pretty awesome! I have seen cycling races in Bend, in the form of loops around the downtown area (which was pretty sweet), and some longer-form races up in the hills. But just check out Cyclocross:

I mention this because Deschutes newest IPA, the HandUp IPA, pays homage to their co-owner Colby, who passed away in 2018 and was the brewery’s cyclocross team captain. I wasn’t aware of this term, but here’s some more info:

Hand-ups: These are an expression describing handing food or money to racers during the race. For USAC (USAcycling.com) sanctioned events, hand-ups may be limited to a designated area; ask the promoter or registration desk if hand-ups are allowed anywhere on the course or only in a designated feed zone. When hand-ups are limited to a feeding zone, the promoter may post a “feed zone” sign.

Hand-ups can be done in the form of food or dollar bills. Promoters will sometimes insert dollar bills on the course or they can be held out randomly for racers to grab. Popular food hand-ups include beer (where permitted) and food items like bacon or even donuts. The goal is for the racer to maintain speed while grabbing the hand-up. This makes for exciting interaction between the spectators and the competitors.

The beer itself is true the West Coast roots, with a non-hazy IPA that has a nice citrusy and hop profile. I get a little grapefruit in there and is something that would absolutely be a great refueler on the cross country course – whether cycling or running.

Our new mainline IPA is here! HandUp IPA an American-style IPA with aroma and flavor driven by the citrus, tropical, and grassy hop notes with a light malt character with a crisp dry finish. With our NW roots, cyclocross has been a big part of our culture for many years. We chose to name this beer “HandUp” because of our PNW roots and cyclocross affiliation. The beer label pays homage