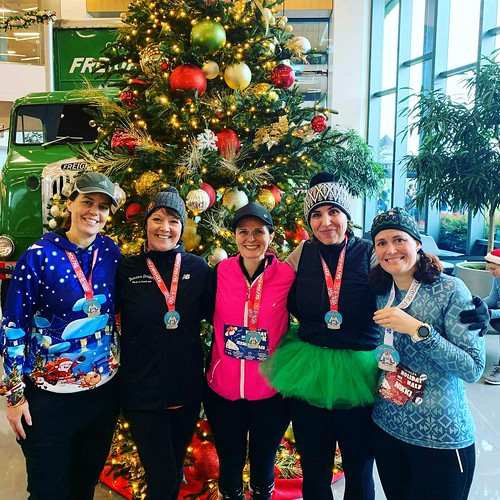 Shuttle buses at races are fine and all, but when it’s cold outside, I always dread them. Inevitably there’s always a wait before or after a race when you’re freezing, and it takes forever to warm up. Two years ago, this was the case when I ran the Foot Traffic Holiday Half, and what I most remember is that it took a full 3 miles before I could feel my fingers and toes.

But there were some changes to the course after that and this year, there was no shuttle to worry about. The race no longer starts out at the Adidas Campus as it did previously, though it’s always been a nice course away from the usual downtown waterfront standard. It was still a bit cold in the morning because – December – but it was actually a really nice morning. Seeing Freddi the Yeti dancing around and all the fabulous Christmas costumes really made me feel some holiday magic in my heart, and I felt reallly happy to be there. It’s been a VERY long race season for me, and this holiday race was the best possible way to end it.

The Holiday Half has steadily become one of Portland’s signature races. There aren’t a whole lot of races in Portland in December, and certainly nothing as large as the Holiday Half. This race is reaching more and more people every year, and becoming a staple for many Portlanders, but the beautiful part of this is that it doesn’t feel overwhelming or cluttered like some larger races are. It’s very well organized, there’s plenty of parking, and the shirts and medals never disappoint.

There were three corrals at the start line: the green group (9 minute pace and under,) the pink group, (9-11 min mile pace,) and the blue group (11 minute pace & over.) There was certainly room for people to spread out and stretch and get their game faces on. There were food trucks with coffee and breakfast choices and the hot chocolate station was in full effect. There were a million port-a-potties which was a welcome sight, as many races don’t have enough to serve all of us with “runner’s bladder.” The atmosphere was festival and friendly enough to grow the heart of a grinch three sizes. 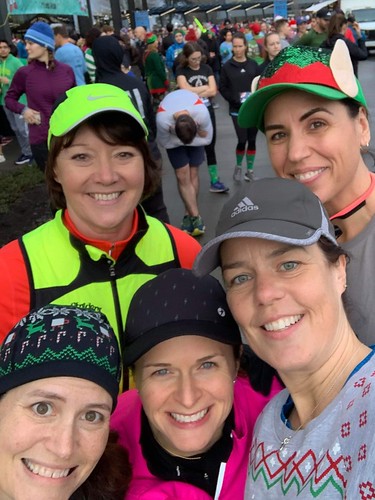 The announcer did a great job of letting everyone know who should line up when, but at some point the mic cut out. We started heading up to the start line and without a lot of fanfare, we took off around 8:07AM. I was a little confused about whether we were supposed to stagger more, but that was my own fault for not paying attention to the many emails we received before the race explaining who should go in what order on race day.

Everyone started off from the Daimler Trucks campus in North Portland on Swan Island and hit the first hill less than a mile in. It built up gradually to some views of downtown and some pretty neighborhoods on North Willamette Blvd, as well as the University of Portland. The course was well marked, (save for a mile 8 sign that was facing the wrong direction,) though I felt more signage would have been welcome at the 10k and 10 mile turnarounds. The half continued straight through these sections, but I can see how some of the other distances could have missed them. There were volunteers at these spots and some chalk markings, but the chalk was disappearing on the wet pavement and the volunteers and some of the runners could have easily missed each other. Additionally, more rubbish bins would have been great, as there were not enough for the runners to avoid having to throw a lot of their cups on the ground. Those poor volunteers likely had quite a job cleaning up at the end. That being said, there were plenty of aid stations and the volunteers were rock stars.

I started slow for this race, as I’ve been feeling a little burnt out lately, but I found it surprisingly easy and increased my speed after awhile without much effort. It was the perfect day for a race, I had dressed right for it, and I felt good. However, I will admit that I went through a bit of the typical “runner’s brain” stuff as I was getting close to the turnaround, as I was becoming more and more impatient around each corner where I found more “out” than the “back” I wanted to see ahead of me. Finally, there it was, and I realized it would not be my best time that year by a LONG shot, but I also knew I’d finish feeling strong and healthy, and that was all that mattered to me. 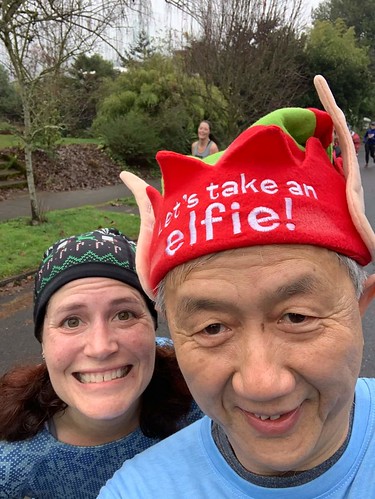 I ran into Capt. Hai from Sunstone Running Club and of course had to stop for a selfie

I ran into lots of friends out there, and that’s the best part about an out-and-back course, because you can see those both ahead of and behind you. My beloved Ladies Badass Gang were there and I was treated to their sunny faces and cheers from both directions. I entertained myself along the course (I ran alone) with the sounds of the wonderful carolers and the people cheering everywhere. The costumes, again, were entertaining, and I got smoked by both a man dressed as a head-to-toe Christmas tree and a guy in a bathrobe and hat a-la-Cousin Eddie from National Lampoon’s Christmas Vacation. It’s not every day that you get to see that, or the thousands of colorful ugly Christmas sweaters. 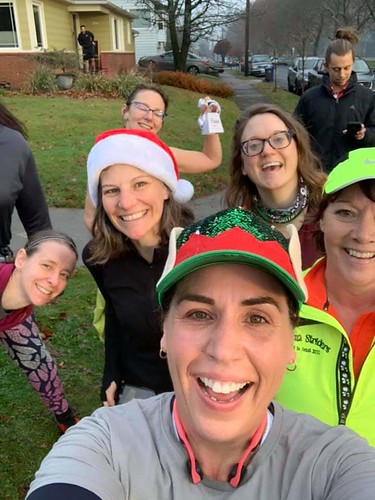 The hill we encountered going out was a welcome sight coming back, as it meant the last mile of the race was downhill. I bypassed the cookie station, as I just wanted to get to the finish, and before I knew it, I was there. I grabbed my bling (the Freddi medals are my kids favorites) and a cold beer from Deschutes Brewery and didn’t feel rushed to get back to the car. I finally got a donut and a hot chocolate and it was the perfect end to a great run.

If you’re looking to do a holiday race, I’d say the Foot Traffic Holiday Half has everything you need. It’s a popular race that doesn’t feel like a crazy train, there are several distances to choose between (there’s also a 5k, a 10k, and a newly added 10 miler in addition to the half) and it’s done very well. The shirts weren’t tech material this year, but the material is so soft and cozy that I know it will become a favorite. And honestly, who could resist Freddi? 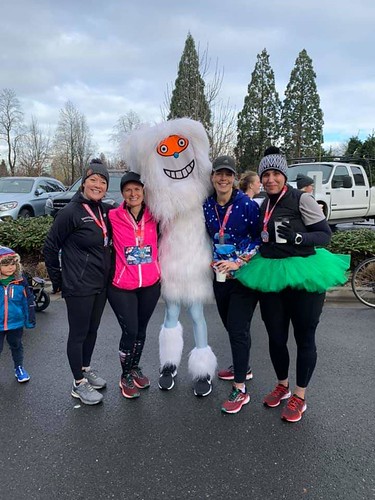