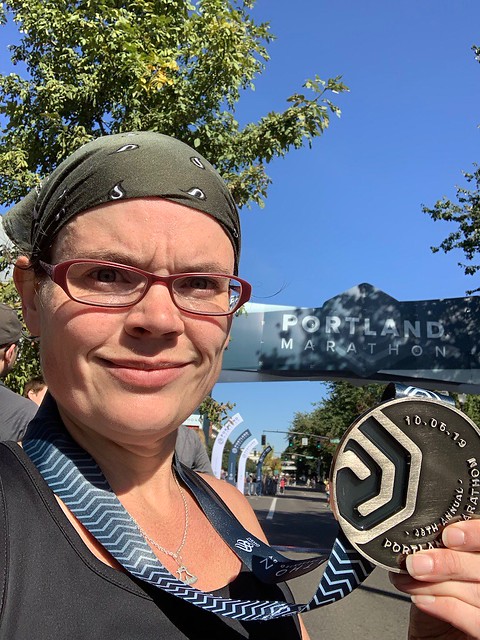 Portland Marathon in 2012 was my very first marathon. It made sense to tackle that 26.2 mile challenge in my own city, where I could spend the night before in my own bed, and later recover on my own couch. Plus, I could do some training runs on the same streets as the course (well, I could have if I read the map correctly, instead I ran some pretty sketchy areas). It was one of the hardest things I ever did. And it was such a high surviving it that I’ve done 13 more marathons since then. As the sign on my bookshelf says, “26.2 miles because I’m full of crazy.”

I kept running the Portland Marathon several more years, but last fall decided to try something new after feeling discouraged by industrial course that included sides of a highway and possible delays by trains. So, when news came out last year about a new company, a new course, and a new Portland Marathon, I was skeptical but hopeful. Brooksee, the company that took over the event knew they had an uphill climb on their hands. The leaders behind this race had something to prove. They had a legacy to redeem. And they worked for months and months to do just that. They had stylish social media work, partnerships with local running groups and restaurants, and clear support from city leadership (the mayor was one of the 6,000 runners who lined up on race day).

Now before I go too far into this review, I want to acknowledge that there are articles out right now about some participants who got lost during the race. The exact reasons are still under investigation but appear to be about some missing signs and a volunteer who may or may not have been part of the race. I have done races where the distance was longer or shorter than it should have been and empathize with those runners who did not get the race they worked so hard for. My experience of the race was an hour or so behind these runners and did not hit the same issues they faced. 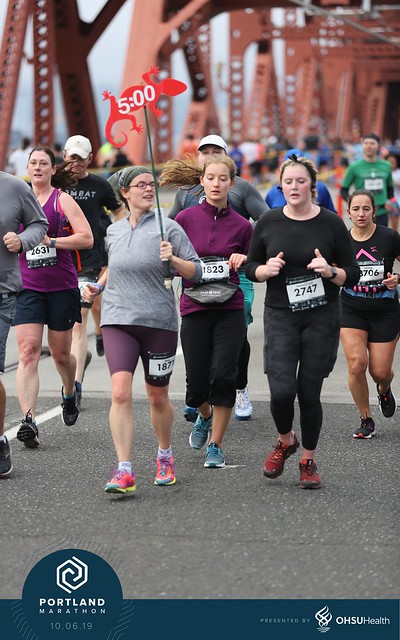 Like many large races, Portland Marathon required participants to go to an expo before the event to pick up your number (other options were to pay extra to get it race morning or be mailed). I was among the early crowd at the Convention Center to get my number, thermal water bottle, tank top (I paid the $5 extra to swap from a t-shirt), and swag bag of stuff. The entire room was set up as a funnel experience with the second section primarily connected to Fleet Feet, and then other vendors in the third portion. My favorite booth was super cheap gear from the old Portland Marathon (at this very moment I’m wrapped up in a $15 jacket that I’m sure was originally $50 or more).

The weather predictions had us hoping and praying for no rain, and the sky gods delivered. It was cloudy and cool all morning. The half and full marathon participants started together at 7:10am, which meant a lot of runners headed into downtown Portland on Sunday morning. I was dropped off at 6am, in plenty of time to pick up my pacing gear. Yes, I had some extra fun for this marathon and volunteered with Red Lizards as a pacer for the 5:00 marathon group. My role was to hold a stick with a red lizard on top (I named him Joey) and aim to run at a 11:25 pace for the first 13.1 miles so that other runners could follow along. I’ve run with pacers before and always appreciated the positive peer pressure, and ability to let someone else do the thinking about speed. Now it was my turn to encourage and stay on pace. My left arm hurt more than I expected from holding Joey up for all those miles. A nice distraction from my sore calves.

The only thing I’d really want to change about the new Portland Marathon was the starting chute. Instead of corrals, the half marathon and marathon participants were in two long chutes, with runners supposed to enter at the end and walk up to their anticipated pacing areas. Since my timing was near the end, it was no big trouble for me. But then I was jostled by a lot of stressed out runners trying to get through. Maybe two or three sections would help.

The new course is a large loop that includes sections of Portland that I had not run before. We started up into NW Portland, getting close to Forest Park, before heading over the Broadway Bridge. After a loop around Moda Center we were back over Broadway and headed south, past the start/finish line and into South Portland. The new course had us crossing three bridges (Broadway, Sellwood, Burnside) and into more neighborhoods than I knew existed. They had recommended that pacers learn all the turns…I just learned there were a lot of turns and hoped for the best. Large banner signs helped us track the miles, while funny quotes seemed to pop up when I needed them (especially the WTF – Where’s the Finish one). Aid stations were also plentiful throughout the course, with one every two miles for the first half and then every mile for the second portion. It was so nice to not worry about carry water with me, though I did have my own snacks (fruit bars) because gels leave me feeling queasy. The volunteers were energetic and happy to be showing off their neighborhoods for the “worst parade ever” (another sign on the course). 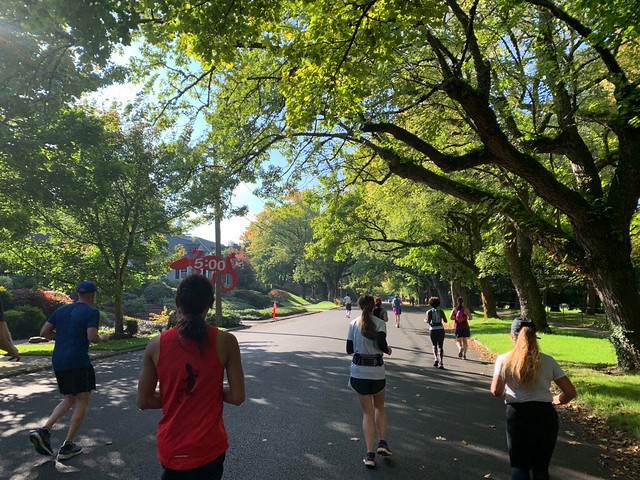 After we went over the Sellwood Bridge, I got to pass off my pacing responsibilities (bye Joey) and just focus on running. Which also meant more opportunities to notice where I was. And to notice how often I had no idea where I was. One of my favorite things about running is getting lost and unlost in new spaces. And this race did that for me over and over again. I am a big fan of this new course and hope it, and this race, just get even better next year.

The finish line was back where we started, on the west side of the Hawthorne Bridge. The area for participants had the traditional water, bananas, bagels, and chocolate milk. But the real treats were after the fence. On our race bibs were coupons for food from food trucks from Pizza Hut, Voodoo Donuts, Salt & Straw, and Deschutes Brewery. Line lengths varied since other folks could also purchase from some of the trucks. I grabbed a slice of cheese pizza and some honey lavender ice cream before heading to bag check for my warmer clothes.

Overall, it was a great event with a unique course and lots of perks. I didn’t quite understand the logo on the medal, but it is hanging on my wall and looking right at home. And since registration is already open for 2020, I am already looking forward to next year. 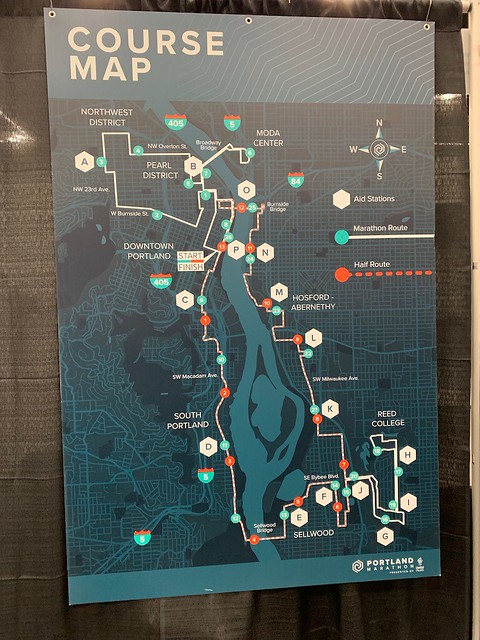