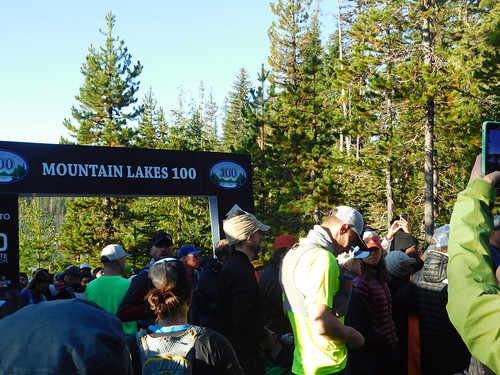 Ever since I started training for my first 100 mile race I have been asked, Why? The answer to the question has changed as I progressed from the very beginning of my training to eventually completing my first 100-mile ultra race. I chose the Mountain Lakes 100 for both its description and its location (close to me in Oregon) along with knowing the race directors themselves. Both Todd and Renee put on great races throughout the Northwest including this one.

The race website gives the following description  “One of the country’s most beautiful 100-mile races that runs past more than 25 mountain lakes between Mt. Jefferson and Mt. Hood along with running over 60 miles of the Pacific Crest Trail.”  After having run this both in the daylight and all night long, I would definitely agree with that statement.

After training for about nine months to get ready for this race, I arrived with my crew and pacers to attempt this challenge. Leading up to the day of the race, the nervous tension had been building, and I kept asking myself, “Had I trained enough? Did I do the right thing? Am I going to be able to make it to the finish?” All these questions kept repeating over and over in my mind. 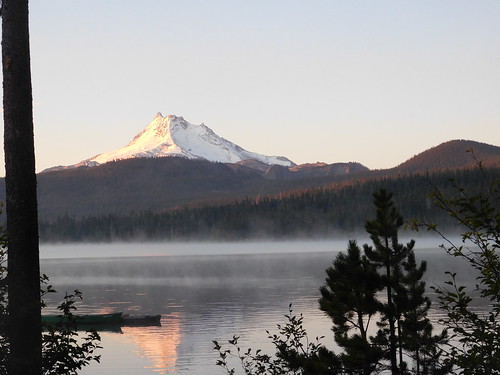 We arrived at Olallie Lake, the location of the start and finish of the race, early enough to see the sunrise and the beauty of Mt. Jefferson in the distance behind the lake. I walked with the members of my crew to pick up my bib and the pair of Nike trail shoes that were given to each of the runners. As other runners arrived, everyone was looking at the course map laid out on a nearby table and seeing the entire distance that we would have to cover during this run.

About 15 minutes before 8a, all the runners got together at the start line for a race briefing by the directors. We were told that the course was well-marked and to look for the orange agility cones and ribbons with reflectors every quarter mile and signs for all the turns. Another thing we were told is that we will be experiencing some very low and painful times during the race especially at night, but that we would get through it and as the sun rises the next morning our moods would improve and we would push our bodies and minds to a great accomplishment that we did not think we could do. After the short talk we all gathered behind the start line for the countdown and then we were off.

158 ultra runners ran up the road and turned right on a single track trail to start the race. We passed Olallie Lake and Monon Lake, and so many other unnamed lakes as we proceeded across many single track boardwalks on our way to the first of the many aid stations during the run. Each of the aid stations had plenty of ultra food: Coke, ginger ale, chocolate, pretzels, peanut butter and jelly sandwiches, and many flavors of GU. All the food was so that we could keep the calories up during the race. The first point where we could meet our crew was at Aid Station 2, a mere 8 miles farther and at the bottom of a 1,900 foot drop in elevation. At this point, my crew helped top off my hydration and I was back on the trail.

As you leave the aid station, you gain back all the elevation lost over the past 8 miles. This was a slow technical grind, all uphill. If you are good on climbing you could have passed all the runners that were now power hiking up the mountain to the Horseshoe Lake Aid Station, passing by many other small lakes. After a quick stop for some well-deserved aid station treats we headed back to where we started this loop at the start and Aid Station 4 at Olallie Lake. Once again, we could see our crew and access a drop bag with new supplies.

As I looked for my crew I got my hydration pack refilled and finally found my crew and drop bag. I picked up my headlamp, back up headlamp, and my arm warmers because I knew by the next time I saw my crew it would be dark. I gave a big hug to my youngest, who was taking pictures as I got ready to leave. Here, the trail runs a short way up the dirt road and makes another right onto the PCT, which we would take to the next aid station, just 4 miles away at Olallie Meadows. This would be the last time to see our crews until the Clackamas Aid Station at Timothy Lake.

We then continued on a 25-mile trek along the PCT. We passed through Pinheads, the Halloween-themed Warm Springs, and Red Wolf Aid Stations, each well-stocked and staffed with caring volunteers that were unbeleivably positive, and wanted to make sure all is going well with each runner. They all want each person to make it to the finish.

At the Red Wolf Aid Station, the trail crosses through the aid tent and out the other side to the start of  a nice slight 3-mile downhill. At this time the darkness started to set in, so I took out my headlamps to light my way forward. Running a race at night is a first for me. So naturally I slowed a bit to make sure I could see my footing.

As I made my way closer to the Clackamas Aid Station the leaders passed me going the opposite direction back to finish. A little bit later I could hear the loud cheers and whoop, whoop as I ran into the Clackamas Aid Station. Here I met my crew again. I sat down and had some mashed sweet potatoes with maple syrup, and a bacon and waffle sandwich. I changed into long sleeves with my beanie and gloves. At this point, I got to pick up my first pacer that would go with me around Timothy Lake. 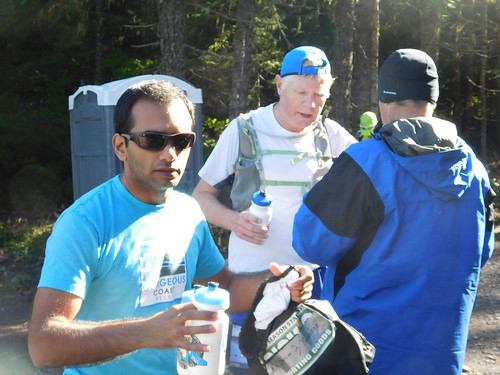 Marc (in the blue hat) with his pacers/crew Sach (sunglasses) and Mike (blue coat) at Aid Station 2.

After a few minutes of recovery time sitting in my lawn chair I got up and started the loop around Timothy Lake. As we continued around the lake we made a short jaunt to the Little Crater Lake Aid Station. This aid station was fixed up like a rave in the middle of the forest manned by the members of the Wy’east Wolfpack. They were having so much fun, with energy that spilled over to all of us runners. They had hot chicken broth and in the middle of the night on a cold fall evening, it hit the spot and warmed us up. Soon we were off again and headed to the Timothy Lake Dam Aid Station.

As we approached, the entire dam was lit up with multi-colored lights. Just seeing this made me break out into a slow jog along the dam till we got to the aid station. After another quick stop at the aid station we followed the lights up the hill and continued up the trail back to the Clackamas Aid Station. At the aid station I met the crew again where they all made sure that I was eating and hydrating. This would be the last time I see the crew until Olallie Meadows, which is less than 4 miles till the finish. I picked up my second pacer who would be alongside me as I completed the 100 miles.

I was on my return trip back to Olallie Lake in the dark. At this point I was feeling the lowest I had ever felt during a run. It seemed that everything was hurting and it was cold and dark. It was hard to keep any food down. At this point I remembered what Todd, one of the race directors, said at the beginning of the race and the words my youngest had written on my arm in Sharpie: “Constant forward momentum.” I took it to heart and kept pushing forward, up and down the hills, trying to shuffle jog when I could. We went back though the aid stations again; this time Warm Springs was decked out with a Christmas theme.

A little bit later the sun rose in such beauty over the horizon, we had to stop for a moment and enjoy the view. At the Pinheads Aid Station, volunteers were making crepes. I sat and ate a whole crepe and then got up and pushed forward. It seemed like forever till we made it back to Olallie Meadows and the last aid station until the finish. I met the crew and told them I was only stopping to check in and then make the final push to the finish, but once I got to the station they offered me a hot cup of coffee I had a few sips. I passed the cup off to my youngest and I was off. Now I knew I would make it to the end … in enough time before the 30-hour cut off.

My pace quickened as much as it could as we went up and down some gently rolling hills that at this point seemed more massive than they did 24 hours ago. I kept straining to hear the cheers that would mean the finish line was close. Finally we came around a corner and I saw a spectator standing on a rock who told us the finish was just down the trail and around the corner. 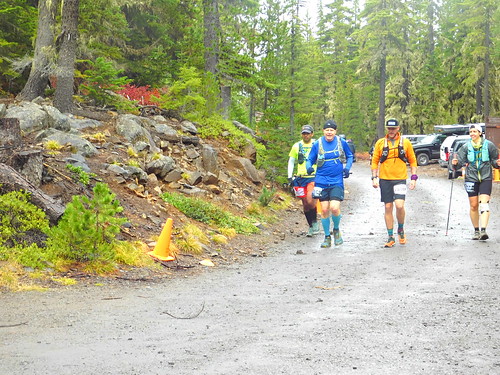 As we came down to the road I handed my hiking poles to my pacer and I ran as fast as I could at that time to the finish line. I could see it and pushed as I crossed it. There to meet me was Todd, one of the race directors, to hand me my 100-mile belt buckle. I could not believe it … I had finished. I took the buckle and turned to look for my crew. I gave my youngest a big hug and thanked the members of my crew. If it wasn’t for them I would have not been able to accomplish this achievement. 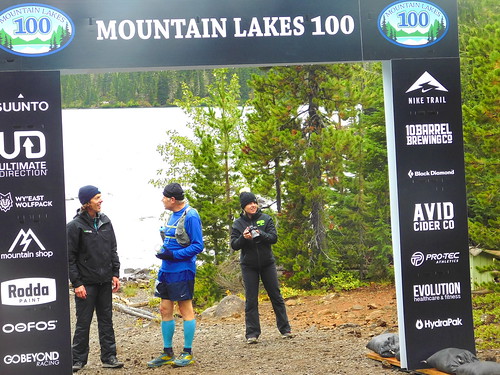 Marc Larson (in blue) talks to co-RD Todd Janssen after finishing the Mountain Lakes 100. Race photographer Teri Smith stands nearby ready for the next finisher.

Now that I have had time to reflect. This was an amazing race, put on by a great team. Go Beyond is a great running organization and each of the runs that I have done with them have been very enjoyable and professional. This race, the Mountain Lakes 100, shows you they care a lot. All the volunteers and people involved care about each and every participant. If you want to learn “Why run a 100-mile race?” I would suggest finding the answer at this race.