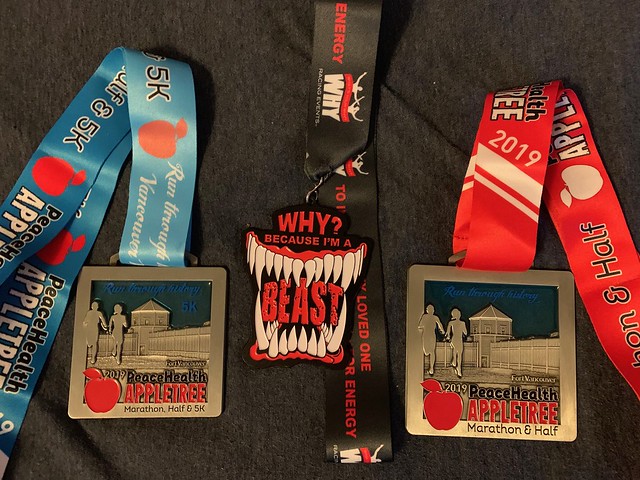 Those words are etched into a medal now hanging on my wall. And the method behind my madness in signing up for a 5K and half marathon in the same weekend. The race directors said participating in two events meant a bonus medal, and I do like running…and shiny objects.

The first race of the weekend adventure was the Sunset 5K on Saturday night in Vancouver, under a perfect sky with a few clouds, sunshine, and a breeze that kept you going. There was packet pick-up that afternoon before the start so it was simple to get the amazing swag bag before lining up. And seriously, the swag for this race was amazing: race shirt, colorful cloth bag, gloves, mason jar mug, cooling towel, and snacks. And that was before getting a gorgeous medal with an image of Fort Vancouver at the end.

The race started at 6pm, so most runners and walkers were done before sunset. Really the only tough thing about the whole event was finding parking, and I’m sure someone more familiar with Vancouver would have been fine. The course was primarily an out-and-back, with a turnaround at the site of a 200-year-old apple tree, the oldest apple tree in the country. The crowd included lots of families, plus police officers in full uniform as the race weekend was raising funds to support these local protectors. Most of the course was on a paved trail, with one patch near Fort Vancouver on gravel. Within the last half mile was a steep portion that was probably just a hill, but felt like Mt. Everest (and the next morning felt like double that).

After a flat and fast finish, I picked up my medal and laid down in the grass to recover for a bit, before heading home to sleep. I did have an early morning to get ready for… 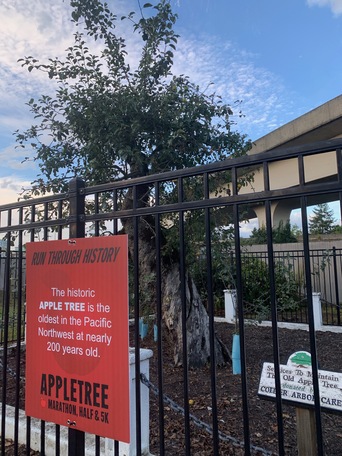 I had been wanting to do the Appletree Half Marathon ever since seeing all the lovely pictures last year. Half marathon and marathon participants use the same loop course, with the marathoners making the journey twice around. Some portions of the loop are out-and-backs, including along the waterfront and a mile near the end that somehow felt much much longer than a mile (it’s amazing how physics breakdown during a race).

I’m about a month out from my fall marathon, so I decided to settle in with the 2:15 pace group. I knew that speed would push my pace, but not break me. There was a downpour happening all morning so that speed was just right for this Goldilocks. Like the 5K, the course included a variety of areas, including paved paths, sidewalks, a parking lot, the waterfront, a park, gravel, and a “mountain” before the finish line. It was hard to get started in the rain, but after a few miles, everything is wet and can’t get any wetter. The 2:15 pace group ended up with just a few of us. Small but mighty. And our pacers were friendly and encouraging (especially when I fell behind around mile 10 due to an iPod fail…music was a nonnegotiable by that point).

After claiming my half marathon medal, and finding where to score my Beast medal, I slowly trudged back to the car, looking forward to a hot shower, pizza, and a nap (in whatever order it happened).

It was a good adventure, and one I might be foolish enough to try again. Especially with such beautiful courses, nice volunteers, and shiny medals to experience. 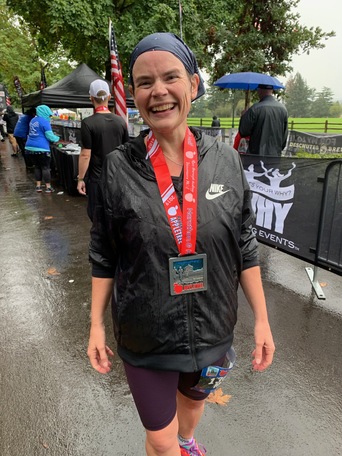