We’ve all had good runs and bad runs, races that went well and races that seem to never end. And somewhere on our long lists of races we have a few that stand out as our favorites. The stars aligned: the weather was perfection, your legs turned over effortlessly, and you got everything out of the race you’d come there for. The inaugural Wild Outback 50K is on my list for that.

Hosted by our friends at Alpine Running on June 8th, this race is the first and only of its kind in the Oregon Outback. I did not know Oregon had an Outback, but indeed, in Southern Oregon, there is a Scenic Byway that leads you through the high desert, dotted with lakes, tiny towns, and spotty cell service. It’s a far cry from the lush, green forests of Portland and is different even to the Bend/Sisters area. It is 100% worth exploring and the best way I know how is by trail running.

If I could be more organized, I would have arrived a day or two early to sort out a camping spot, explore the little town of Paisley, unplug, and relax before race day. I always have the best of intentions, but invariably it’s a scramble to get out of town and we rolled into the campground on Friday night just before 10 PM (thoroughly missing the spaghetti dinner and pre-race packet pickup) and were very lucky to find a spot. We backed in, set up the Subaru (fittingly, an Outback in the Outback) for sleeping, and caught a few hours of rest. There are two wonderfully convenient campgrounds by the start/finish line; one literally at it, and one about a mile down the road. We were at the latter so in the morning it was just a quick 2 minute drive for a casual packet pickup, oatmeal and coffee (courtesy of the race), and shuttle departure.

The shuttle ride took just under an hour – fair enough, the race is point-to-point in the mountains. A big thanks to the race directors and Paisley school for arranging the transport! On the ride up, we spotted a pronghorn, which was the only notable wildlife I saw all day. The busses dropped us off in a grassy lot, somewhere south of where we started. There was another opportunity for a bathroom run here and then we all timidly peeled off layers (it was a cool, sub 40 F morning!) and threw our gear in the RD’s vehicle, then gathered around for our race briefing. We were told the course was a long 50K and to expect a 34-mile day. After some playful teasing about the cold, the directors sent us off a few minutes early.

We started to climb right away and we all found our places easily. I secured my position near the back (I’m not a strong climber) and settled in. The climb was short-lived and we began a breezy descent into AS1. Gorgeously soft singletrack in the trees rolled underfoot, the miles ticked by, as did the endless wildflowers to start off the race scenery. The course ran along the Fremont National Rec Trail and was simple to follow, but well-marked nonetheless: orange tape secured with reflective clothespins every 1/2 mile or so.  Alpine Running takes care of their racers in that way, and really every other way. Aid stations have all you want and need – hot and cold, sweet and savory, real or “runner”, hearty or sugary foods galore. Sunscreen, bug spray, salt tabs. Vaseline, first aid, chairs. I grabbed watermelon slices and Muir energy gel and got back to it. 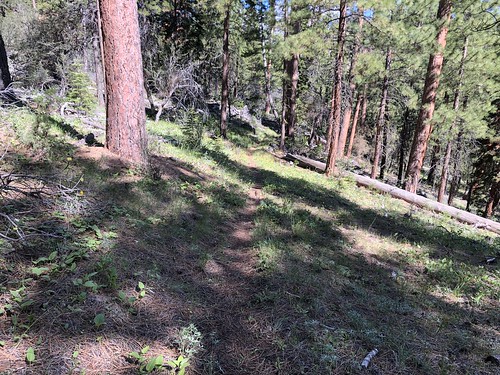 The next section was clearly a cattle trail. The cattle guards gave it away up front, but then the double track confirmed and I have to say, if it’s a rainy day, that section would be a sloppy, muddy effort! Luckily we had dry ground and it was rut-hopping uphill for a while. It was ankle-twisting territory but the views made you forget the challenge. It was this section where I found my group. Other runners, similarly-paced, willing to chat in solidarity, pseudo-pacing, getting each other through. There were 5 of us, leap-frogging over the miles when photo stops and varying strengths allowed for passing. Up and up we climbed, out of the trees, nothing but singletrack and incredible vistas (and a brief snow patch), the lookout tower destination looming, marking the high point of the course. 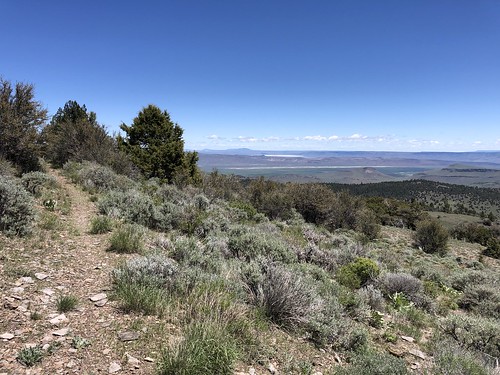 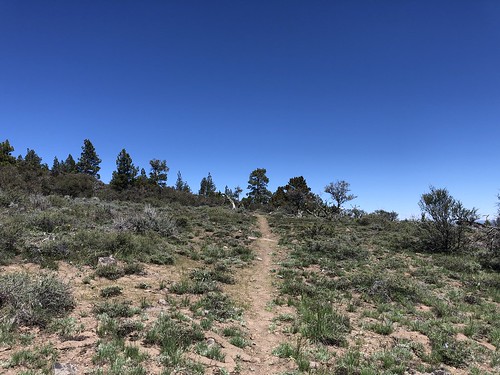 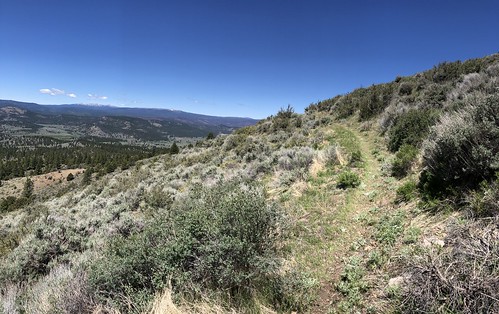 I took up the caboose of the group at this point and was certain I was going to be DFL for the day. I was running (er, hiking) strong, but the field was small with only 64 runners. I came into AS3, the final, and was pleased to find bacon and my group members. A volunteer checked off my bib number on their clipboard and said “Great! Waiting on only 9 more!”. Confused, I clarified that I was not, in fact, DFL. I was surprised, as I hadn’t seen anyone behind me in the distance all day. We later learned that there was not a single DNF, which is awesome!

I could feel I was getting sunburned. Obviously exposure + altitude runs that risk and though I was wearing a long-sleeved merino top and shorts, I forgot my hat. I was happy with my gear choices, but took advantage of the spray sunscreen quickly on my face and legs, and headed off down the home stretch. From here, it was 7-ish miles of downhill to the finish. Not gradual downhill, but fast and flow-y. My favorite.

I ran these last miles alone. Some of it through the trees, some through meadows, with some small water crossings, and at one point a sign that said “Cat Canyon” (where I began to sing out loud, like a fool, but just in case). About 2 miles out, it dawned on me that the finish line is a bridge over the river and that I was still very high up. I passed an orange flag (“yup, still on course..?”) and wondered where the heck the river was. As if he’d been summoned, a random man running at me stopped and said “You’re nearly there, about 20 minutes out!”. Thinking that he’d been running uphill, maybe I could get it done in 18. I picked up the pace. I heard a whoosh and wondered if that was the water, the wind, or a car. A woman and a young boy were hiking toward me and she said “Really, it’s JUST down there, you’re nearly done!” The boy proceeded to ask me questions about the color of my tent and where I camped and I had to politely tell him I needed to get going. I jetted down a few switchbacks and then I could see the bridge, I could see my husband, and I could see the finish line. Done!

High-fives all around, all smiles, finisher’s medal adorned, and I was ready for my flip flops and a cold Coke. There was an impressive burrito bar, but that would have to wait, as my stomach was still churning. I dug around in the cooler for a can of carbonated anything, passing up the beers, and then caught up with my running buddies, all of whom had finished ahead of me.

The race was on Saturday and it was tempting to camp that night and enjoy the Outback; we’d come all that way, after all. Alas, it was early enough and to get a jump start on the 5.5 hour trek back to Portland, we headed toward Bend.

I trained hard all spring and this race was an impressive challenge to kick off the summer race season. Inaugural events hold a special place in my heart, especially when they’re a terrific addition to a solid lineup of summer trail races in Oregon.

You can check out the 2019 results here, and see photos here and here.

Be sure to check out Alpine Running’s other events throughout the year as well; they are all gorgeous and challenging trail runs, from half marathons to hundos. Their latest, new for this year, is the The Ruff; a 7-mile challenge in the Gorge on Dog Mountain in October. Don’t miss it!