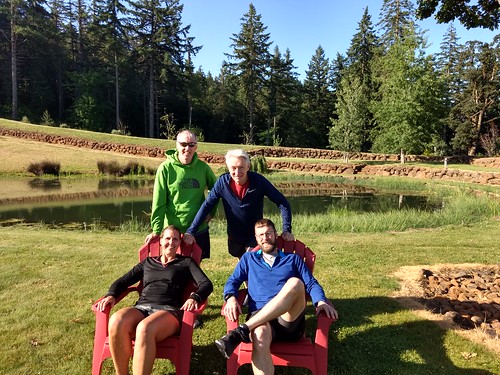 Race morning was sunny and beautiful. My friends and I arrived at Legacy Estates just in time to beat the rush and were parked and headed to check-in ahead of the pack. After we got our shirts and race bibs we had plenty of time to explore the venue. It was so scenic and relaxing I almost forgot I was there to run. Until I looked up at the hills . . . Oh boy!

At the start line, we were given a few pre-race instructions. One of them being the reminder that those of us who signed up for the 10K would be doing 2 loops of the 5K course. We were also told that if we didn’t feel that we could complete a 2nd loop, we needed to let the timers know if we were changing to the 5K. At the time I had no idea how tempting that option would be.  Then we were off, the sound of gravel crunching under our feet as we begin to climb. Slowly at first, but we were climbing. Those of us doing the Military Challenge had to veer off course long enough to do some squats and jumping jacks and then it was back to more climbing. Soon it became more efficient for the majority of us to “hike” rather than run. That first big hill was a doozy! Every time you thought you had almost made it to the top there was more hill. As we rounded a corner and discovered that the giant incline continued I heard a number of groans and some words that shall not be repeated in this post. 😉

Fortunately, what goes up must come down. There was some reprieve in the form of flat and some sweet downhill. And then we were climbing again, and then descending. Along the course there was a total of 3 stations for those doing the Military Challenge. Each station had a sandwich board with the exercises listed and the number of reps required for male or female participants. Station 2 included lunge jumps and flutter kicks, while sit ups and push ups were at the final station. 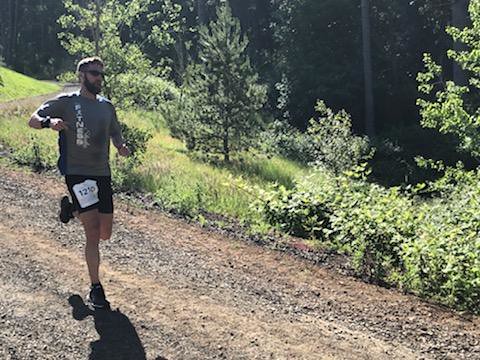 My friend, Jason, flying down the hill at Legacy Estates Vineyard Race 2019

As I mentioned earlier, I had just returned from vacation 2 days ago and the course was doing me in. I’m sure it didn’t help that I spent the previous day catching up on yard work and definitely didn’t hydrate enough. I was seriously dragging. After grabbing some water at an aid station I started to feel sick to my stomach. That’s when I begin to seriously consider bailing after one loop.But, I managed to talk myself out of cutting it short. I knew the guys I came with would let me have it if I quit early. I continued on with round 2 wondering if I was going to be the last one to finish, but feeling better once I got a little ways into it. I was glad I didn’t wimp out.

The one thing that was unclear about this event was the Military Challenge rules. When I registered, I assumed I’d be doing 3 stations with exercises during my 10K – as that is how it was stated on the website. While running, I realized that those 3 stations would also be there on my 2nd loop. Was I supposed to do the challenges again? On my 2nd loop no one was doing exercises when I got to the first station, so I asked the volunteers if I was supposed to do the exercises again. They told me I didn’t have to, so I ran on. I was doubting my decision, but I didn’t see anyone else doing exercises the second time around, so I figured that I did the right thing – or that I was really far behind. Upon talking with my speedier friends after the race, I discovered they DID do the challenges a 2nd time. Then I felt terrible! I am a rule follower by nature, so feeling like I had cheated was killing me. I beat myself up about that one for the rest of the day, but I also had to remind myself that the volunteer had told me otherwise. Regardless, in retrospect, I should have done the challenge a 2nd time. I feel like that was probably the intent.

Eventually, the finish line was in sight and I was making my way to the grassy area to hydrate and recover. We each received a creative finisher medal complete with a corkscrew and wine stopper. I managed to down 2 bottles of water and eat a mandarin orange in record time. My body needed water after that challenge! There was a live band playing, various booths, photo ops, and wine tasting in front of a idyllic pond. It was a great setting for a post-race party atmosphere. 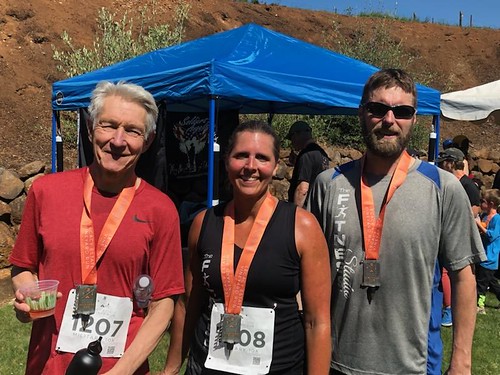 While this race was very challenging, I will definitely be back. I love a good challenge (even though I may doubt that during the challenge), and I enjoyed the variety that the Military Challenge offered. It added a good twist to the 10K and 5K race. Believe it or not, stopping to do a few exercises was almost a nice break from the hill climb – at least mentally! The course was scenic, the hills were epic, and the post-race setting was amazing. (Go here to see some great pictures from the course and read a recap of the 5K from our own Matt Rasmussen.) And, next year, I’ll get that Military Challenge done right!