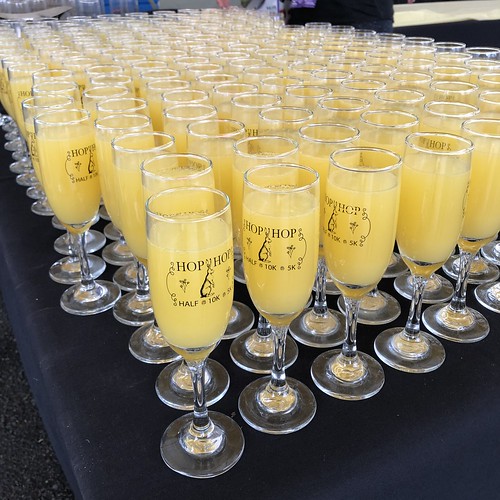 Arriving at Kliever Armory for the Hop Hop Half that gray, Saturday morning was both typical (parking was slow and there were runners in all sorts of gear and costumes wandering, stretching, warming up, laughing, taking photos, drinking coffee, plugging in headphones, kissing and hugging loved ones, and locking in GPS signals) and atypical (you were driving right next to the 5K racers coming into the finish line, there was a pre-race expo with all sorts of goodies and activities, an Easter bunny was dancing about, and the wait for a porta potty was about 15 seconds long). The music was the perfect volume, there was plenty of space to move around and enjoy the morning, and I was excited for my first road half marathon in over a year. I was hoping for a PR on this flat and fast course.

The weather at the starting line couldn’t have been more ideal. Cloudy, cool, and calm. No rain, no beating sun, and no wind. We all lined up behind the inflatable arch, arranging ourselves behind the appropriate pacer signs, waiting for the horn to sound. 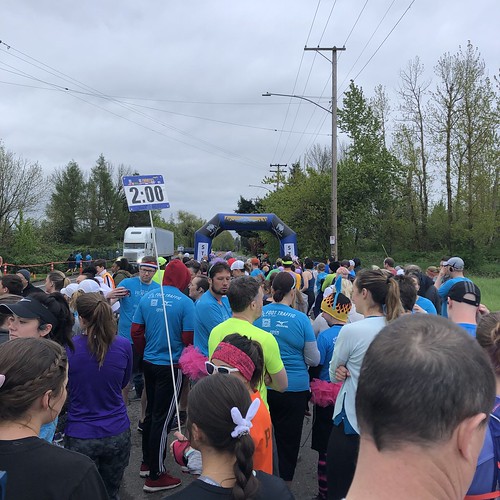 We took off down NE 33rd headed south along the road for a bit, making a quick left, a sharp turnaround, back the way we came, through the arch again, past the first aid station, and eventually spilled out onto the Marine Drive bike path with our uninterrupted river views and flat, straightforward course. 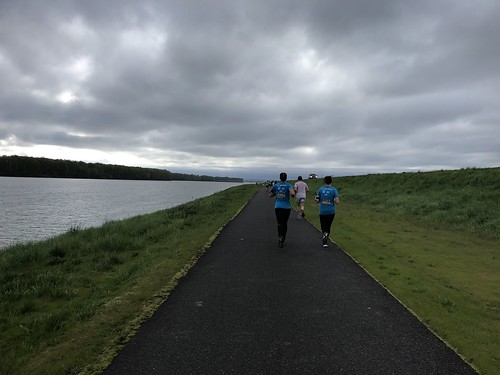 The miles clicked away easily and the aid stations came and went. The volunteers were full of energy, with ready and accessible water and electrolytes, as well as gels on the table and, as promised, the marshmallow Peeps!

The only “hill”, so to speak, in the course was around mile 7.5, just before the turnaround under the 205 bridge and it was lined with spectators and chalked up with inspirational messages. Gaining a mere 5 feet, it was hardly a climb, but after miles of speedy flats, it was a small wake up call to the legs!

I spent much of the race leap-frogging with a guy in a full-on track suit and was impressed he was able to keep pace without overheating, as I was in just a t-shirt and shorts. I would pass him and a few minutes later he’d speed by me, making me self-conscious that I had slowed considerably. This was our pattern throughout many miles: his second, third, fourth, and fifth winds would send him sailing by me and then I’d squeeze by again on the left. In the last stretch, about ¾ of a mile from the finish, I felt my left foot swimming around in my shoe and noticed my shoe was untied! I pulled off to quickly knot it up and my pacer / race buddy / speed inspiration flew past. “Such an amateur move!” I cursed at myself for not double knotting and took off to catch him, to no avail. I conceded that he deserved to finish ahead of me, but it was a nice little challenge at the end to sprint it in!

The post-race party was fantastic, with mimosas, brunch, an egg coloring station, firepits, a giant finisher’s medal, and a little egg carton of chocolates to enjoy. I was immediately texted my time for the race and was delighted to see I met my goal of setting a PR and ecstatic that it was by 10 minutes! I felt strong and happy, particularly so because I had back-to-back race weekends and I was feeling a bit fatigued after the prior weekend’s trail race. I commiserated with a fellow racer over mimosas about our respective PRs and eventually made my way to my car to head home.

Foot Traffic is a great running store and the races they host follow suit. I remember cheering my husband on at the inaugural Hop Hop Half in 2013 and had always been keen to run it myself – it was as good as I’d hoped it would be and with the addition of the 5K, 10K, and Kids Run, it has something for everyone. Plus, it’s hard to deny that Easter-themed anything is just too fun!

For more details / results / photos, head to the race website; and definitely check out Foot Traffic’s other races throughout the year!