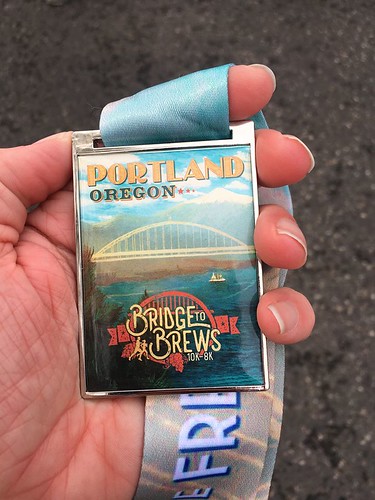 I needed a shake-out run before my spring marathon, and Terrapin was advertising that they were holding the very last Bridge to Brews 8K/10K that would go over Fremont Bridge. Thus, my schedule for Sunday, April 4th was figured out for me.

I realized as race day approached that it was going to be a busy running day in the Portland Metro. While 2,700 of us lined up on SW Naito, runners would also be near Columbia River for the Spring Classic races and out west of the city for the Vernonia Marathon and Half Marathon. Plus, all those folks who run around in circles without a medal (and local beer) at the finish line. While the weather had looked iffy all week, the rain held off until after most runners were done so it turned out to be perfect weather for whatever distance you were going to run.

My step-dad was joining me for this adventure, though we had decided to run our own paces. So, we rode down together and wandered among all of the tents set up before the starting time. One end of the field was blocked off with an L-shape of about 40 porta-potties. Folks were lined up 20 or more deep for those near the street, leaving us free to walk right up to the ones near the Esplanade. #SorryNotSorry #KindaSorry #NotReally

Both race events started at the same starting line and at the same time, so my step-dad and I stuck together until crossing under the arch. I was headed for the longer course and had a speedy goal in mind (to build some confidence before the next weekend’s 26.2 miles). The course took some familiar turns through industrial portions of downtown before heading toward what we were all waiting for: Fremont Bridge. Race staff had blocked off a lane of the bridge for runners and walkers, so there were cars driving by on one side, and on the other side folks stopping for those Bridgetown Photos. Although I had a time goal looming in my mind, I paused a few seconds too for a quick selfie before the arch of the bridge.

It was only after I started coming down the bridge that I realized I had no idea how many miles in we were and had not spotted an aid station yet. There was supposed to be an aid station before the bridge, but either it wasn’t there or I somehow missed it in the mass of people. I didn’t see any mileage signs until Mile 3, which was a fun discovery. I was almost halfway through the race and feeling good. 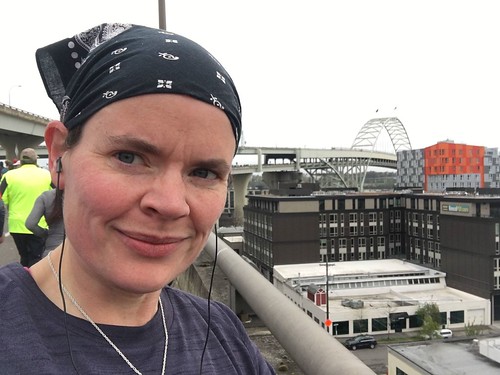 I’d like to pause my recap at this point to apologize to all of the Trailblazer fans that our race got in the way of. Our race was scheduled months and months before the Blazers made it into the conference playoffs. But I understand that that fact doesn’t make it any better that our course went right past the spot all of your needed to turn to park your cars. I tried to run extra fast during that portion, and not make any eye contact with drivers. #ReallySorry

After looping past the Moda Center, the course split so that the 10K runners added an extra mile and change and the 8K runners headed more directly toward the finish line. There was no sign to indicate where the split was. Just a ribbon in the middle of the road and some rather bored looking teens holding up 8 or 10 fingers. I didn’t figure out what their fingers meant until after I’d past them. Thank goodness I was on the right side. And someone needs to make sure the volunteers get caffeine and signs!

The added section for the 10K runners had more twists and turns than I could keep track of. I’d looked at it on the map in advance, and didn’t even try to count all of the corners we would go around. It seemed like we were constantly going up or down steep little hills among the industrial brewery area. I’d hit a wave of baking smells and debate (for just a second or two) skipping out on the race and just finding a happy hour instead. Luckily my feet didn’t get the memo and kept moving forward.

Our course had us going over Steel Bridge to get back into downtown Portland and to our finish line. A great thing about the course was that the finishing arch was visible from the downhill portion of the bridge. So, it was easy to put on the gas for that final stretch. I claimed my medal and waited for my step-dad to come into view (our paces and distances were anticipated to match up well). Reunited quickly, we picked up our souvenir cups, wandered back through the brewfest, and then left in search of warmer clothes. It had been perfect weather for a run; not a hang out.

I’m hopeful that Terrapin will create an even better event now that we have said “Farewell to Fremont.” And my personal record from this event definitely provided that boost to head into the next (much longer) running adventure.