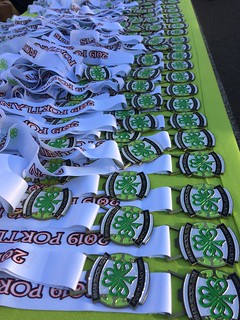 In the twelve years that I have lived in Portland, I have run the Portland Shamrock Run more often than not, and 2019 stands out to me with the best weather I could possibly imagine! I had convinced my husband and sons to join me at the Shamrock Run (for two of them it was the first time participating) so we got up bright and early (too early, according to them..) to make our way to Portland for the 8am start. Street parking is free in Portland on Sunday mornings until 1pm, and we easily found a spot about half a mile from the finish line. The sun was coming up and it was a clear, crisp, and dry morning. When we arrived at Waterfront Park, I could see that Shamrock Run had prepared for all kinds of weather with huge, heavy duty tents covering the post-race beergarten and food areas.

We had registered for the run with a team, so our shirts and bibs had been mailed to us a few weeks before the event. As we walked along all the booths, I noticed that neither bag drop nor the registration tent was very busy, which is nice for a race with this many entries. There was also no day of race packet pickup available (unless you paid an additional $10 fee), a trend that I don’t enjoy since I can’t always commit to being able to attend the fitness fair ahead of race day.

The 5k was the first event of the day, and it had around 6,000 participants. About 15 minutes before the start time we were instructed to enter the street and line up in the northbound lane of Naito according to our anticipated running speed. Volunteers were holding up pace signs, making this process easy. Once in the starting chute, the whole group then walked forward and approached the start line in the southbound lane. The race started promptly at 8am with a wave of about 1000 runners, then stopped the runners for about one minute to allow the pack to stretch out and have more room.

The course for this year’s run was very straightforward: From the start near the Burnside Bridge, head south on Naito (with a one-block jog to the west) until you hit the turnaround point after a 160ft climb, then coast the remaining mile mostly downhill to the finish line next to the Salmon Street fountain. The street was wide enough to accommodate all runners and I didn’t notice any unnecessary congestion. 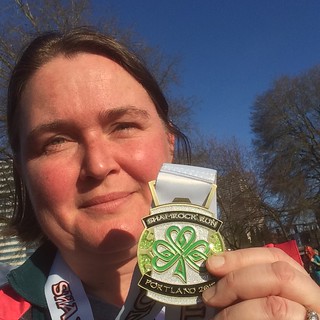 At the finish line, all finishers received a medal (this was the first year for 5k medals) and a bottle of water. The finisher’s chute funneled us past energy drinks and protein bars into Waterfront Park, where I looked for the rest of my family. We picked up our soup and other recovery foods, my husband and I enjoyed our drink in the beergarten while the teenagers visited booths in search of fun games and freebies.

Overall, for an event with six different distances and nearly 15,000 participants (not counting the untimed 4mile Shamrock Stride), it was very well organized. I was worried about the 5k starting first since it accounts for about half of the participants, but with the stretched out start times and different courses, it assured that no fast runner from one distance was held up by slower participants from a different distance. The post race festival was stretched out over several blocks of Waterfront Park, allowing for enough room for all. While we didn’t need the rain cover this year, I was happy to see it in place since I’ve been soaked at Shamrock Runs before. Definitely a fun, festive start to the spring running season.