Have you heard of this little event called the Portland Shamrock Run? If you live anywhere near Portland, you’d be living under a rock if you hadn’t, as it’s the largest running and walking event in Oregon and the 3rd largest in the Western US. This year, it celebrated it’s 41st year, and I’ve personally run the Shamrock Run more than any other race ever. In fact, I’ve participated in it for 15 straight years. I ran the Half the very first year it was an option, I did the 5k while pregnant with each of my boys, and I stayed by my husband’s side when he ran his first (and likely last) Shamrock Half. I ran it back when they gave you oversized unisex long-sleeved cotton t-shirts that I used as nightshirts at home, and the more recent tech shirts in all the shades of green. But one of the biggest traditions of Shamrock race day that rarely changes is that the weather will be bad. I can count on one hand how many times I wasn’t cold and miserable on race day.

But this year, we had a major shock. After snow in March (really, Oregon?) the skies parted and the sunshine came through, and we actually had a glorious sunny day in the forecast. However, I had already pre-purchased some Shamrock tights, and they were too thin to pass the “bend over test,” so I opted to wear a thin pair of tights under them. I also wore a long-sleeved shirt because I knew I’d be standing around a lot before and after the race. These choices proved to be the wrong ones. So did running 13 miles the day before. 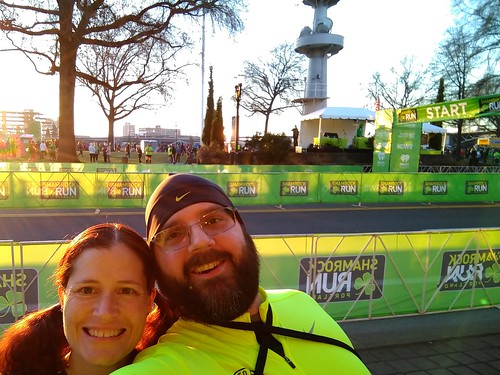 Me and my husband enjoying the beautiful weather before the race

For the record, I WAS cold standing around before the race, but at least I wasn’t bored. If you’ve never been downtown during the Shamrock Run, it is an experience. Picture a sea of green runners everywhere you turn and no matter the rain or wind (or sun, in this year’s case,) everyone is cheerful and pumped for the race. There are vendor tents everywhere, music pumping on the sound system, and lots of people out there trying to keep you moving. The comradery among the runners is hard to explain in words. It’s just a feeling you get when you step out there. It’s infectious. It’s admittedly a huge event, overwhelming for some, annoying for others trying to get around for their regular weekend activities downtown. But here’s the thing .. it’s organized. It runs like a well-oiled machine.

I’ve been running long enough to know what I should and shouldn’t do before a race, but I never want to miss out on anything and I’m stubborn. I felt the excitement of the crowd growing as we stood waiting for our turn to run across the start line, and I also knew right then what I’d feared all along. And that was that I had overdressed. I hadn’t even started running and I could feel the sun shining down on me. A woman standing behind me told me she’d brought arm sleeves but changed her mind at the last minute and had handed them off to her husband. A wise choice for her, but it was too late for me now. 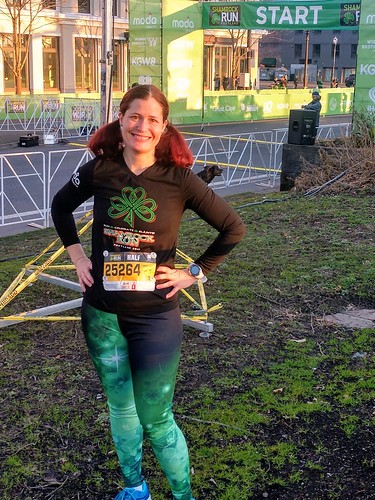 I was thankful for my friend Jessica for the first 4 miles. She had been smart and worn a tank top and shorts, and I tried to keep up but I finally told her to go ahead because I could already tell that I was going to overheat if I didn’t slow down. 5 miles in, we were traveling up a gradual hill on the downtown streets of Portland with no shade. I opted to do something I very rarely do unless I’m running a full or ultra marathon .. I walked a little. I stopped at a few aid stations for water and electrolyte drink, and I even poured water on my head. I hiked both pairs of pants up as well as my shirt sleeves and did my best to cool myself down. Luckily, there was plenty to look out while I did this. There are several places where you can hear band music, the volunteers are all wonderful, and the runners themselves are always a great people-watching activity. Our own Kelly Barten was representing our Portland chapter of The Badass Lady Gang and I was grateful for some friends to encourage me. 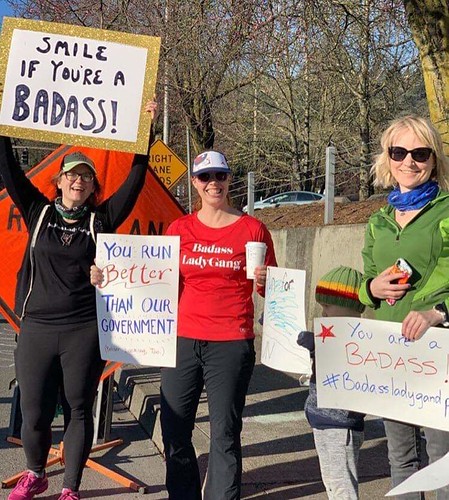 There was one final hike up to the start of Terwilliger Boulevard, and waiting there was a man telling people that the worst part was coming up. I don’t know if I prefer hearing this or that I’m “almost there” when I’m not ever close, but I had to laugh. I was actually looking forward to Terwilliger because I run that road a lot and I knew there was shade there. And when I finally got there, it was such a welcome change. I could have climbed the steepest hill for 10 miles that day if it had just been in the shade. Even better, the view of a crisp Portland day from the top of Terwilliger is so worth the climb!! Once I got there, I began to feel better and I knew I’d make it. There was a slight breeze and I felt great. Once we got over the last hill on Terwilliger, we were told that we were done with hills, but that really wasn’t true either. Passing Duniway Track, there’s another uphill climb on the road, but at least you are about 10 miles in at that point. It’s totally manageable, and before I knew it, I could hear the cheers of the finish line.

I finished the race in just over 2 hours. I would’ve liked to be faster, but I considered it a success because I didn’t die and I managed a respectable time even with having to walk a few times. The after party, as usual, was great. The live music in the beer garden is always fantastic, and everyone earns that free beer. Everyone is happy and celebrating another year of running an epic race.

Ultimately, I do this race every year because it’s well marked, well organized, well stocked, and just well done in general. 25,000 participants show up for one of the many distances offered (a 5k, 8k, 15k, and Half Marathon are all choices, in addition to a 4 mile fitness walk and a kid’s run.) That could be a recipe for disaster, and even with a course change a few years ago, it’s all been smooth sailing. It’s a great race for new runners as well as experienced ones, and it’s both challenging as well as beautiful. It’s a rite of passage as a runner in the Pacific NW, and it’s the unofficial kick off for race season.

I had met a man that morning who had just moved to Oregon and registered for the race two days prior. He had no idea that this race was “such a big deal” and that people came out in droves for it. He asked if they canceled it when the weather is bad, and I laughed. Clearly he doesn’t know the spirit of Oregonian runners yet. Nothing stops us from showing up and getting the job done. Even a little sunshine!! 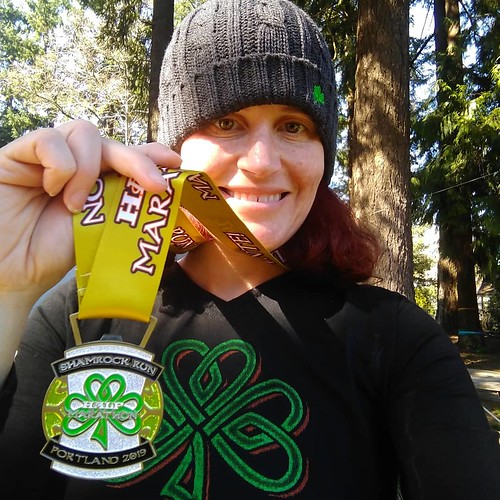