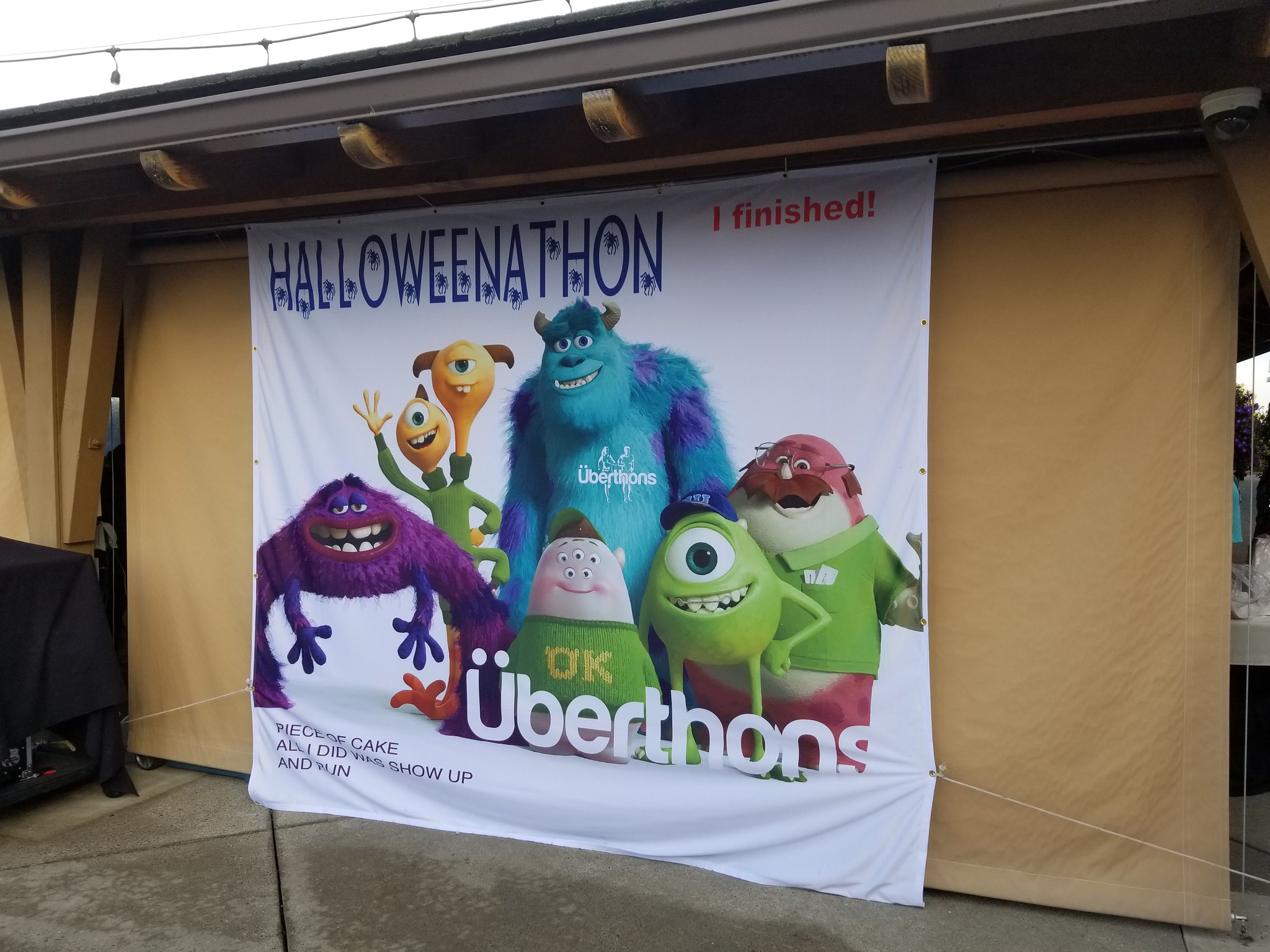 Halloween weekend brings about Ubethons’ race + costume content + obstacle event extravaganza known as the Halloweenathon. On a mild Saturday morning, several hundred participants showed up to race a 5K or 10K or to run/walk a 2.5K or 5K fun run. And to show off their costumes for the costume contest!

I’ve been running this race since its beginning in 2011, when it was known as the Monster Moon Run/Trick-or-Treatathon/Run for Your Bones, and spanned an entire day. In 2014, it was rebranded as the Halloweenathon and became a morning-only race, with the subsequent addition of an obstacle course variant with fun station along the race route. But what’s been constant throughout the years has been the location (The Reserve Vineyards and Golf Club), the experience (chip-timing, well-marked course, great race support, finisher’s medals), and the atmosphere (festive but not overly crowded). 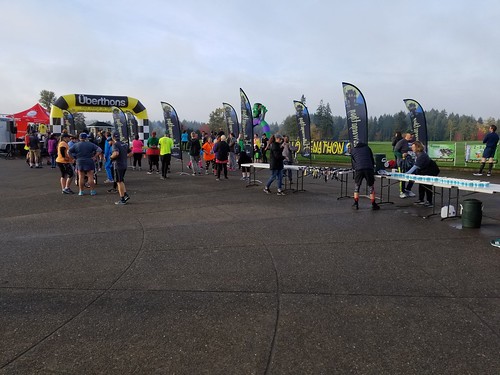 At the start of the race, it was 52 degrees and completely calm, with a bit of sunshine but mostly overcast. I was comfortably dressed in shorts and a longsleeve tech shirt, and just eager to get started. I managed to squeeze my way into the front group at the start line, along with some familiar (to me) faces: Ross Crowley, David Hume, DuWayne Olson, Eileen Kuffner, and others. Uberthons Ambassador Margo Glass (in a Wonder Woman costume) did the announcing and sent us off in waves, with the first group ending right after me.

One time on this very course, I tried keeping up with Ross. He was running the 15K and I was running the 5K. It still did not go well for me…. This time, I tried a different strategy, which was to follow David Hume, who I knew would run a challenging (but not impossible) pace for me. He’s also taller than I am, so I figured perhaps there would be some drafting behind him. This seemed to work pretty well. I’ve been slacking off a bit on my weekly mileage, so I wasn’t expecting to PR or anything, but I was still gunning for a sub-22 minute finish. About 1/2 mile into the race, I heard a runner ahead of me yelp in surprise. Did she trip? I soon found out. As I approached a little bridge on the path, a person with a gorilla mask jumped out and growled. (It kind of reminded me of how I would roar as I chased down helpless survivors as a zombie during the Zombie Apocalypse Run…. good times.)

Drafting behind David lasted for 8/10 of a mile. Normally, I go out too fast at the start of the 5K and pay the price down the road. On that morning, however, I still felt pretty good, and I passed him and soon caught up to DuWayne, who in turn was following a guy in a banana costume. Double drafting, I thought to myself, and settled in behind the two of them. Here too there was some good drafting; DuWayne is also taller than I am, and the banana costumed runner (Alex Kolinski) had a wide profile due to the costume.

Along the way, we passed the various fun stations for the upcoming 2.5K/5K fun run. In the past, the fun run took place not long after the timed race, so the stations would have already been staffed and ready to go. For this year, two hours separated the start of the timed race from the fun run, so the tables were in place and some had prize buckets, but most of the obstacles weren’t set up yet.

Around the 2 mile mark I decided I had enough in the tank to pass DuWayne and Alex. I could see and even hear the crowd at the finish line in the distance. Ah, but I forgot that the Uberthons course on the Reserve has a deceptive bend around 1/2 mile from the finish, where you double back away from the staging area – right where it says “selfie photo op with a gorilla.” Talk about morale crushing!

Just 1/2 mile left, I thought to myself. Less than 3 1/2 minutes…(?) The strategy of drafting behind David Hume first, and then DuWayne Olson later, did pay off, because I didn’t feel disastrously bad. In fact, I ended up running pretty even splits for all three miles. Finally, I approached the end of the race. A volunteer was there to direct 10K runners to go again, and to send 5K runners to the left to cross under the timing equipment. 10K is my favorite race distance, but I was more than happy to turn left. As I crossed under the timing equipment, race director/head timer Alan Rasmussen called out, “Tung Yin, getting in just under 22 minutes.” 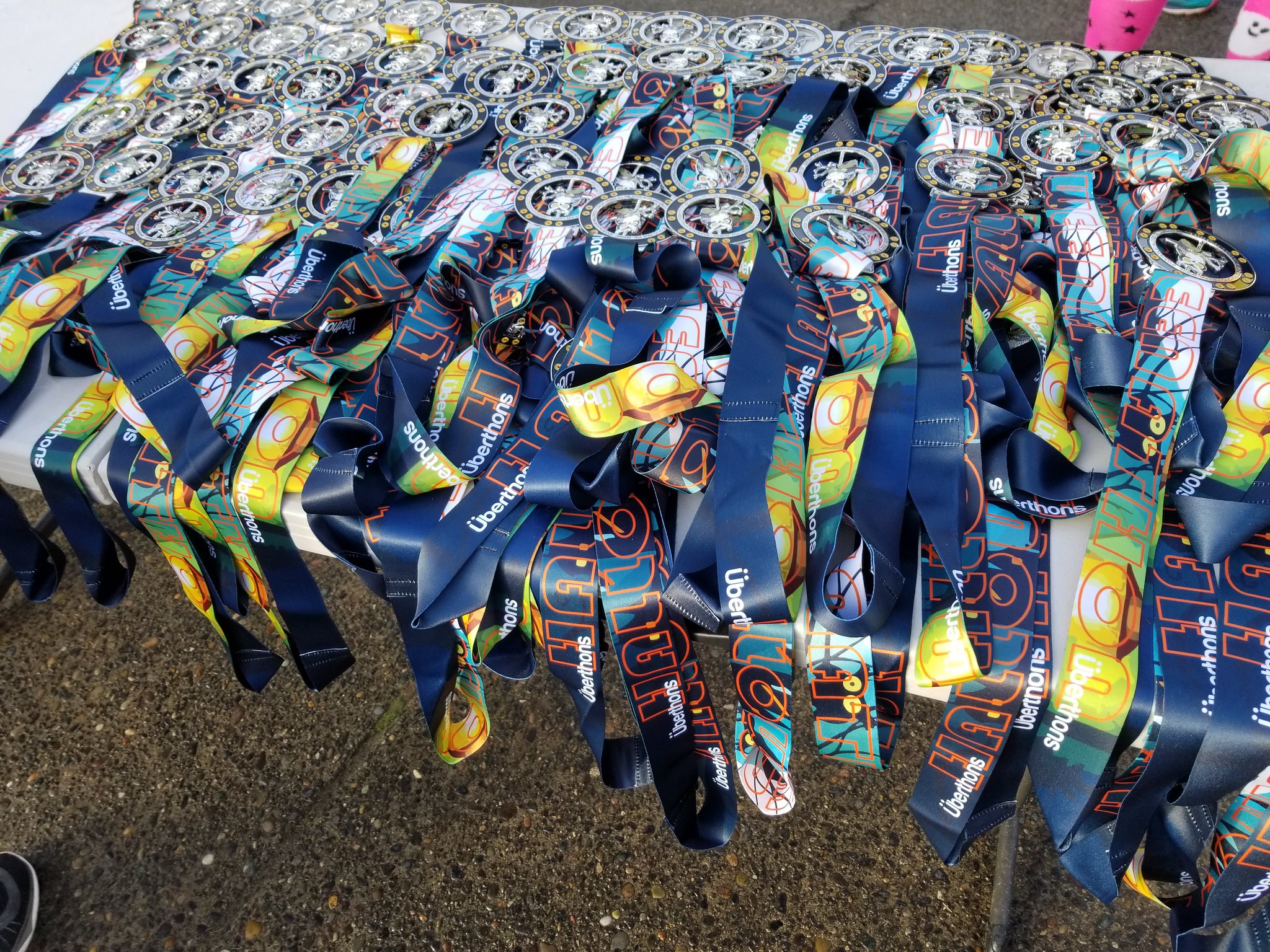 With finisher’s medal in one hand and a cup of water in the other, I walked around a bit to unwind, and then headed over to the covered area with the nachos bar. Uberthons is always adding new touches to its races; this was (I think) the first time I’ve ever seen this spooky walkthrough: 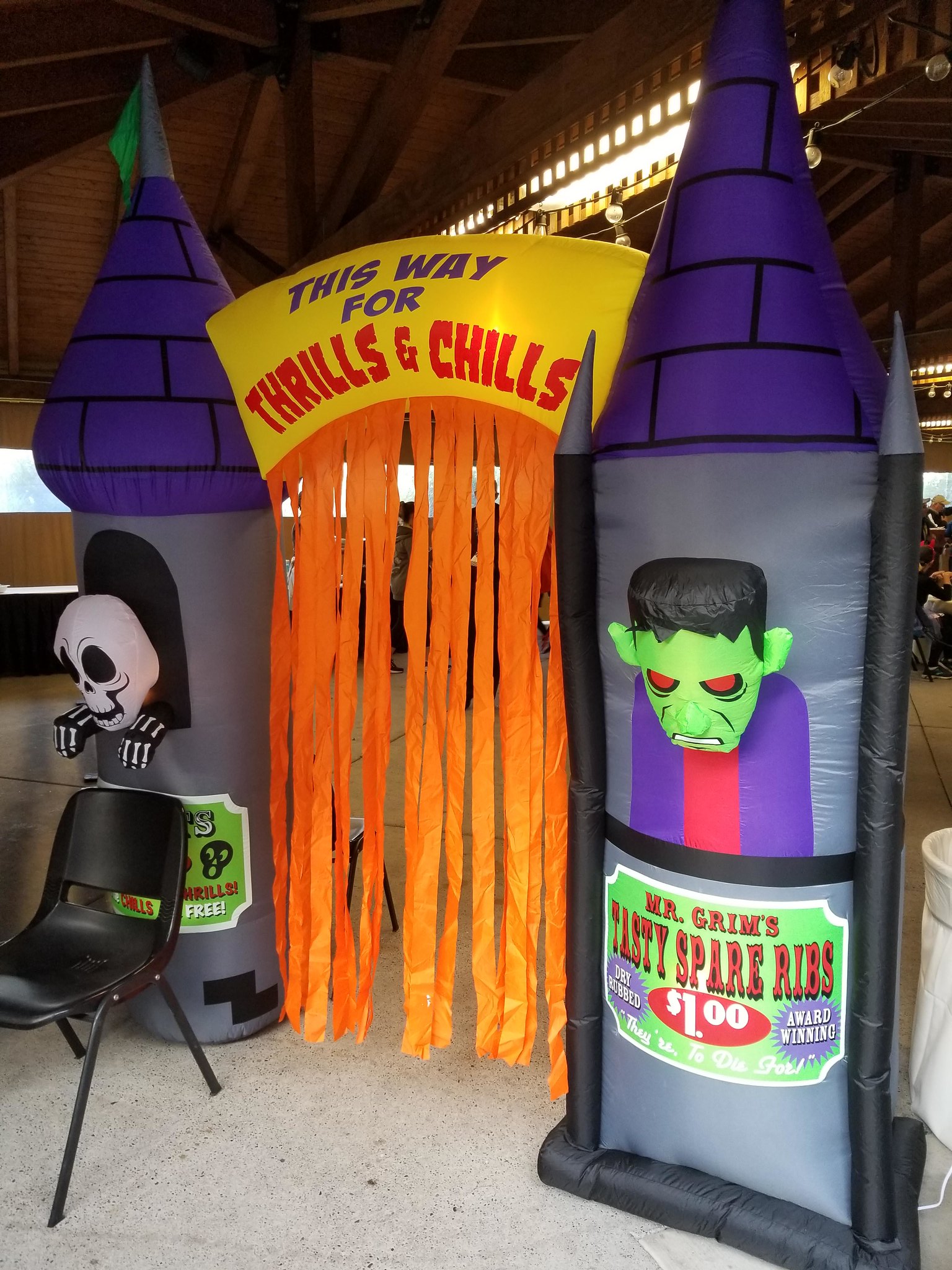 Just to the left of the chair was the nachos bar. Now, I admit that my food tastes may seem strange, as I have steadily grown to dislike cheese, especially gooey cheese — except for pizza (though even then, if I can customize it, like at Mod Pizza, I ask for a light amount of cheese). Nachos, therefore, are a food item that I pretty much never eat. But the nachos bar here had plain tortilla chips, which allowed me to politely decline the offer of melted cheese. I had dairy-free nachos, with beans, beef, salsa, and olives. Mmmmmm!

In previous years, I’ve tried to go back and run the course again with the fun stations, but with the long gap between the two, and the last day of the fall soccer season for my son, I couldn’t stick around, which was a pity.

In the end, there were 90 finishers in the 10K and 292 in the 5K, making for a nice sized crowd without being overwhelming. This has always been one of the races that I really look forward to, and this year was no exception, and it didn’t disappoint.

A collection of photos can be found here.

The last Uberthons event of the year is the Turkeython, which I previewed here.