It’s been a long seven years since Uberthons last staged a race at the Portland International Raceway, and seeing as how I missed the previous race, I’ve been bugging the race directors for a long time about returning there. It finally happened on October 6 with the simply named “Portland 5K.”

Participants were able to name their own price, starting at $1. But this wasn’t a no frills race; it was the usual Uberthons experience, with big finisher’s medals, age group winner pins, overall winner medals, and post-race food. I procrastinated on registering until the day before the race, at which point a previously announced price of $30 kicked in. As it turns out, $30 is the price that I had decided that I would name as my own price. (I’ve gotten comped to all of the Uberthons races this year as an Ambassador, but I felt it was time to show my appreciation and pay the full amount for this race.)

I’ve been to the PIR only once, for the Winter Wonderland festival, where you get to drive your own car along the race course and marvel at the Christmas-themed light displays. But I’ve wanted to run the course because it’s flat, low elevation, and not very twisty. In fact, it seems like you could just rearrange PIR into I PR!

Parking was pretty easy, so long as you had $10 to pay the PIR lot fee. Fortunately, Uberthons had alerted participants to the need to bring cash. I arrived around 7:50, jogged to the covered tent to pick up my race bib, and then followed the directions to the start line.

To get from the spectator area on to the race track, we had to cross an overhead walkway: 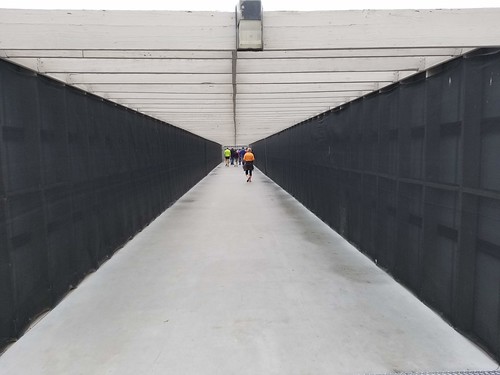 After going through that walkway (which looks like something from the Death Star in “Star Wars”), we had to go across the middle field to the opposite part of the track. That’s because the PIR lap is 2 miles, so for a 5K race, we would be running 1.5+ laps. I was a little worried about getting there in time for the start, so I jogged most of the way.

At the start area, we were faced with a surprise. Instead of the usual Uberthons’ “fast people in front, good looking people in back,” race director Darwin Rasmussen told us to line up by bib number(!). Despite registering nearly at the last minute, I had been assigned bib #15. Aha, clearly someone at Uberthons was looking out for me. Darwin was serious about lining up by bib number. Not exactly in single file, but he sent some people with high double digit bib numbers farther back. A teenager with a bib number in the 50s managed to stay unnoticed to the side of the front group; it turned out that he well deserved a single digit bib number….

Some of us noticed that the starting line was missing the usual timing equipment. Someone thought that maybe there was a mobile detector in the pace car, but someone else theorized that we were all going to be timed by gun time.

Whatever the timing mechanism, we got the go ahead to start. Note that the course map below is for next year’s race, and the start and finish lines are slightly different. We started close to where the blue water line curls away from the top of the track, and finished near the checkered flag.

The PIR track is flat, smooth, and wide. It was everything I had been hoping for in terms of a race course! The front group spread out quickly, with the front runners motoring along at just over a 5 minute/mile pace. Running room was plentiful, and I was able to hit the turns as tightly as I wanted to. Temperature wise it was an ideal 52 degrees with overcast skies.

The first mile went by relatively quickly and brought us to near the finish line. The finish corral was on the right side of the track, but we were directed to the left side of the track to continue the race. My first mile was not ridiculously fast for me, but it was a pace that would’ve gotten me to a near PR if I could’ve kept it up. The only problem was that I wasn’t in the same state of conditioning as I had been back then.

Mile 2 was oddly peaceful. I found myself examining the area inside the track on my left. It looked like there was a little trail in there amid the shrubs. There was a fence atop the concrete barricades marking the edge of the track, but periodically there were rectangular openings in the fencing for human access.

I had slowed during mile 2, but when I saw the mile marker that indicated the beginning of mile 3, I upped my pace to uncomfortable. When I hit that final curve at the top left of the map, I figured I had only a quarter of a lap left! The only problem was that a quarter of a lap on a 400 meter track is nothing. On a two mile lap, it’s a half mile…. That is a long kick. And that last straightaway? It’s deceptively l-o-n-g.

But I finished, and to my surprise, I ran my best 5K in two years! 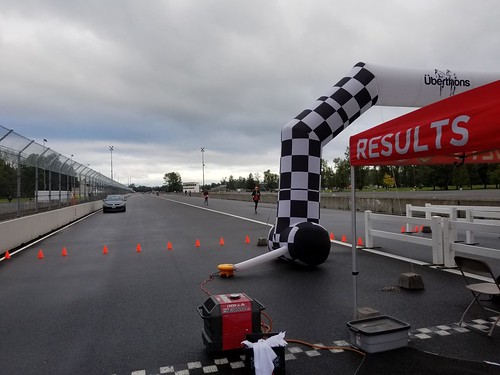 The running was done, but the race activities were still going on. Starting around 9 am, Darwin Rasmussen began announcing the overall winners, master winners, and senior winners. I had managed to place third in the male masters! After the announcement of those awards, there was a break before Darwin was going to move on to the age group winners. I headed over to the food truck to collect my post-race meal (included in the registration price). 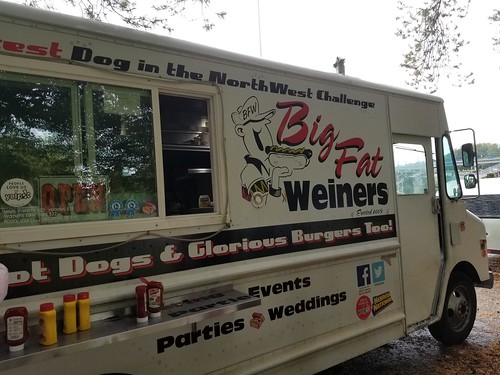 The meal choices were a hamburger or hot dog, and tater tots or a hot dog. I opted for the burger and tots. I don’t think I would normally eat a burger and tots for breakfast, but man, after running a super satisfying 5K, it’s hard to beat that combination.

I made it back to the awards tent in time for the announcement of group winners. I suppose that is another downside of getting older… it takes longer to get to my age group! But it was fun seeing all of the age group winners called up, especially the kids (1-10, 11-14, and 15-19), some of whom were shy or thrilled or both about getting age group pins or plaques (for the top finisher in the age group).

Uberthons has been bringing a gong to races since at least the Freedomthon, with fairly liberal rules on who gets to bang the gong – if you PR the race, or if you PR the course, or even if you PR for that day…. Still, this was the first time that I felt that I deserved to bang the gong, so I gave it a big hard whack. 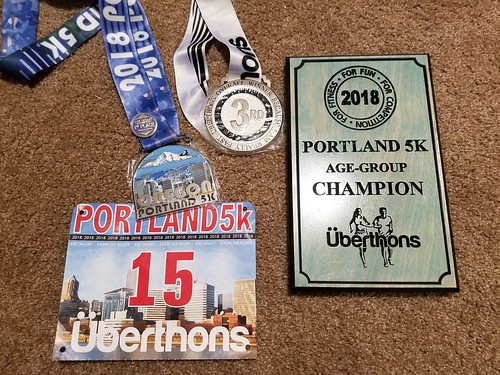 Well, as I said, the Portland 5K at the PIR totally lived up to my high expectations. It’s a fantastic venue for a race, and one for trying to get a 5K PR. For next year, it looks like Uberthons will be adding a 10K option, too!