The addition of the Peter Courtney Minto Island Bridge in Salem, connecting downtown Salem and Riverfront Park  to dozens of miles of paved trails within Minto-Brown Island Park has been awesome for runners. Aside from making run routes and new miles accessible for those of us who work downtown, it also opened up opportunities for races to start up and utilize the extended distance in their courses. One of the first events that utilized this was the Rotary Triathlon of Salem which offers Sprint and Olympic distance mult-sport events, as well as some run-only options. It is back this year on Sunday, September 23rd.

To be honest, last year ran into a little bit of a snag when water safety issues arose in the Willamette River, forcing the triathlon portion to be scrapped and continue with just the duathlon and running-only events instead. So needless to say, they are eager for the tri to make its debut in 2018. Additionally, the race directors have added a half marathon to the running options, so there will be run-only distances from 3.1-13.1 miles.

Here are the triathlon course maps from their website and some descriptions below:

Participants will enter the water from the boat dock at Riverfront Park and will exit at the boat ramp of Wallace Marine Park. The swim course takes swimmers into the Willamette Slough, then upriver along the shoreline of Minto-Brown Island Park swimming against the current, and finally across the Willamette River with the current to exit at Wallace Marine Park’s boat ramp.

Participants will transition to bicycles at Wallace Marine Park and cycle across the Willamette River on the Union Street Railroad Bridge. Participants will then pass through Riverfront Park before merging on to River Road South. The Olympic distance route will take riders past rural lands and farm fields before the turnaround point at the Independence Bridge. [Note: Bicycle participants will be sharing the road with motor vehicles.]

Riders will transition to the running event upon their return to Riverfront Park. Runners will cross the Willamette Slough at the Peter Courtney Minto Island Bridge and enter Minto-Brown Island Park. The route will take participants past open fields, wildlife refuge areas, and beautiful parklands before returning across the bridge to the finish line in Riverfront Park.

If you haven’t yet run in Minto-Brown Island Park yet, I highly recommend it. I run there at least 1-2 times per week and, as the size being actually larger than New York’s Central Park, there are tons of great trails to explore. All of the events will start in Riverfront Park and head over the new bridge into the park The 5k will be a  straight out-and-back, while the 10k will make a lollipop loop. The half will actually encompass another Salem Park (bringing the total in this race to 3!) – Wallace Marine Park. After a 5k loop over there, runners will head out and explore some of the best of Minto’s paved trails and will get to run right alongside the shady banks of the Willamette, through some open fields, and also under tree-lined canopies along the way. It truly is a great course to experience the awesomeness that is running in Minto Brown.

Entry fees include a cool medal (see below) and professional timing will also be provided, though this is not a USAT Sanctioned event. Afterwards, there will also be a tent complete with prizes, and awards, as well as food and drink options. Funds raised from the races will go to “supporting Rotary’s local and international humanitarian projects that promote peace, fight disease, provide clean water, support education, and grow local economies.” Here are a list of those projects over the past decade.

Come down to Salem and check it out! 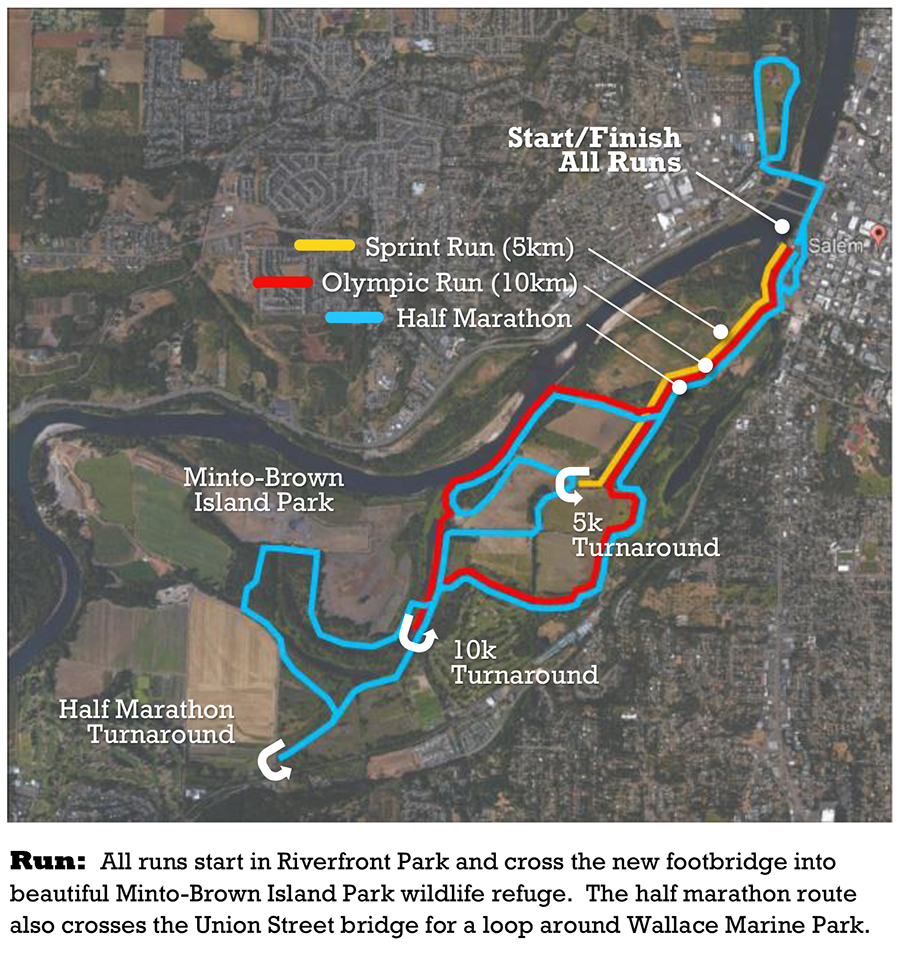