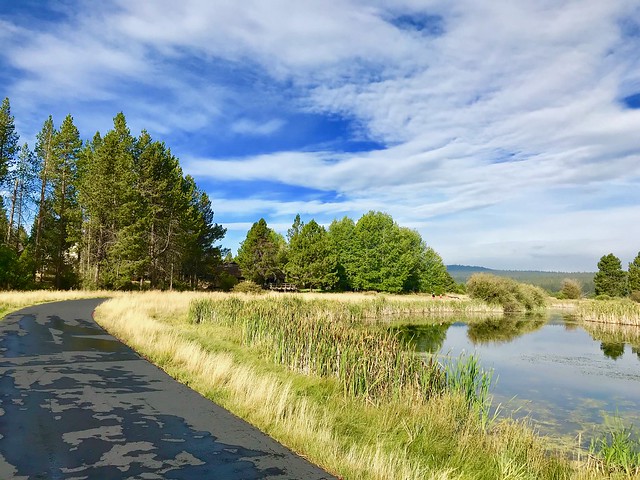 What a difference a year makes. As I was sitting in my Sunriver Resort lodging last year, having avoided going outside much due to the choking haze above, complete with ash falling from the sky, I realized it was only a matter of time before the 2017 Sunriver Half/10k/5k would be postponed. While it was ABSOLUTELY the right call, it was still a bummer for me (and the kids who just wanted to be outside all day long) as I knew that any movement away from the Labor Day weekend was going to mean I wouldn’t be able to run. We still had a great time exploring the indoors of Sunriver, but our fingers were crossed for this year’s event.

Leading up to the 2018 Sunriver races, it was unclear what the weather was going to give us. While we had been boxed in with some periods of smoke from across the region, the fires seemed more distant than the ones that we were literally yards from last year on our drive over on Highway 20. Skies that were blue upon leaving the valley turned into smoke once we hit Sisters and Bend, and we were worried that we may see a repeat of the prior year. However, as soon as we got south of Bend, the skies returned to a vibrant blue and it was clear that the running gods were on our side!

We spent the first few days exploring the Sunriver Resort (mainly pools) and Sunriver Village, before heading into Bend to meet up with family. When I head to Sunriver, I always keep hoping that my real-life job guides me over here at some point in the future. The resort area, while small – generally speaking – always leaves me wanting more, whether it be venturing out on a horse, exploring at the observatory, or finally learning how to take in a round of golf. But with little kids in tow, having a great pool, with chair-side food and beverage service, is all we really need. And look at this view from our back porch. 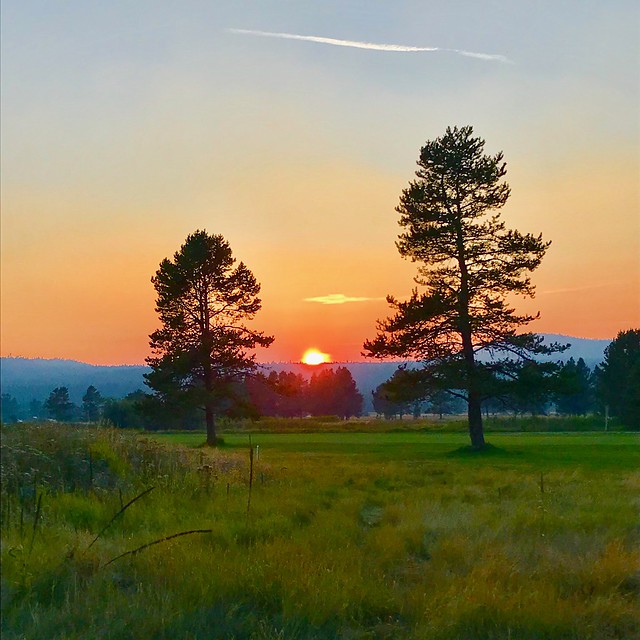 Packet pick-up on Friday netted me a shirt, pint glasses (from both the 2017 and 2018 events), as well as some swag items from Absolut and some discounts at local restaurants and the resort spa. There was also a pre-race concert on the finish lawn that was PACKED with people and had an awesome energy.

Due to time constraints (a wedding on Sunday), I was only able to opt for one of the two shorter distances that took place on Saturday. Though I have run this at least 3 previous times, I hadn’t run the 10k since my very first time, so this was a nice little callback to the beginning of my running days. One of the main perks of staying on resort property is the fact that it took literally 90 seconds to walk to the start line. This allowed me to actually take my time in the morning and not feel rushed for the 830a start.

I talked with a few runners at the starting line who were returning to Sunriver to race after last year’s postponement and everyone was in agreement that it had been the right thing. We also agreed that we wanted to make the most of our race and not take it for granted. We toed the line and the blue skies shone overhead and the brisk temperatures (39 degrees at race start) felt warmer than anticipated.

The 10k course is pretty straightforward, a double loop on some of the main paved trails around the resort. Here are some shots from the course: 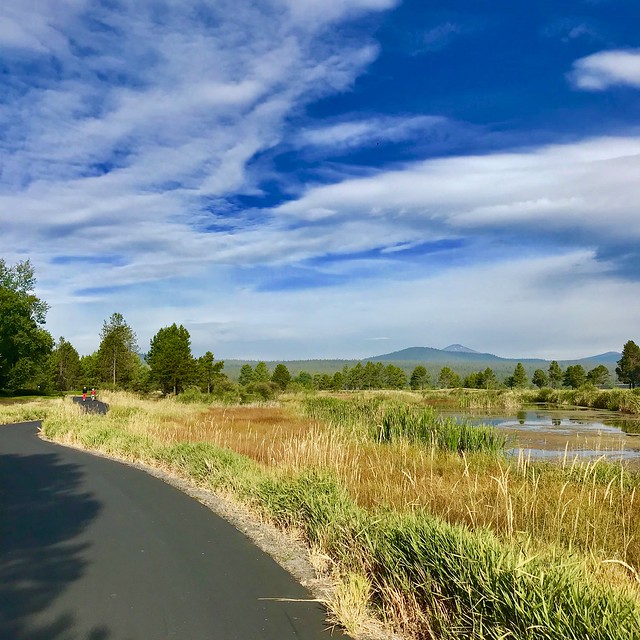 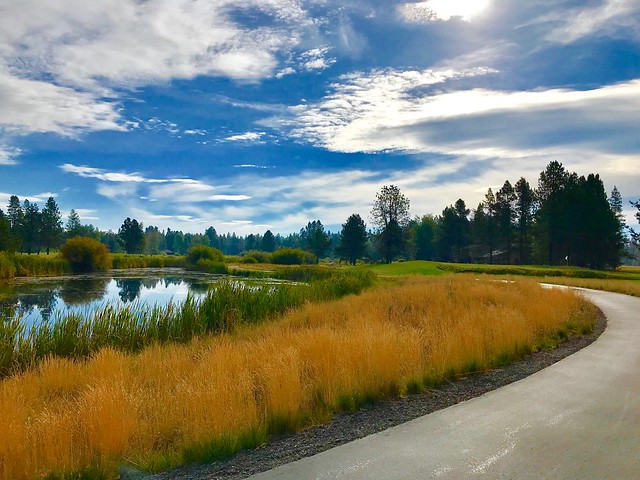 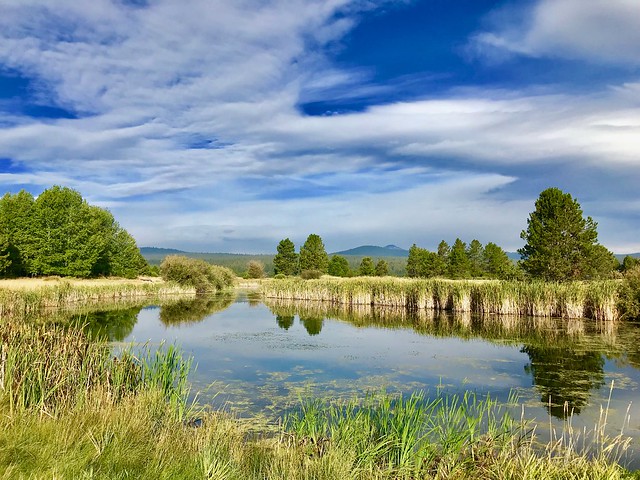 After about a mile and a quarter, the setting changes from the more open air golf-course trails and enters the more rustic and tree-lined trails that we know and love about Sunriver. Things stayed pretty flat aside from a short hill, climbed once per lap, just before mile 2 (and 5). With about a 3/4 of a mile to go with each lap, we meandered back near the main resort area and navigated some paved trails before ending up back at the main Sunriver Resort lodge. The final lap had us curl around to the back Meadows Lawn for a finish backdrop that is unrivaled anywhere in Oregon. 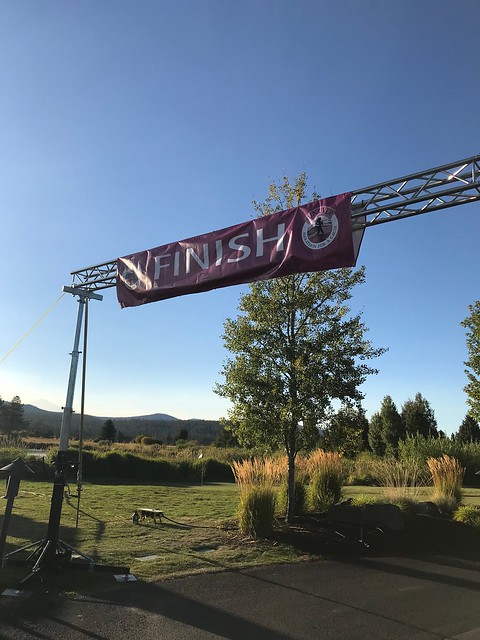 While there weren’t a whole lot of deviations from the trails, the course was fantastically marked, from both signs and pink ribbons along the way. There were also a ton of fantastic volunteers that stopped traffic, pointed us in the right direction at any mult-way trails, and offered encouragement along the way. Truly, these volunteers were second to none!

After the race, there was a great post-race spread of snacks and beverages and the lawn area was filled with music, finishers, and people just laying out and enjoying the sunny post-race glory. It was awesome that 1st, 2nd, and 3rd place finishers for both genders received vouchers for free stays at the Sunriver Resort! This was also true for the 5k and half distances as well, and the top three in the half also received a cash prize!

This remains, to me, the premier pre-back-to-school race for me and my family. We get to spend a little time away from home, enjoy all Central Oregon has to offer, and take in a fun and well-supported race as well. We will continue to return and can’t wait for next year already – fingers crossed for more blue skies!