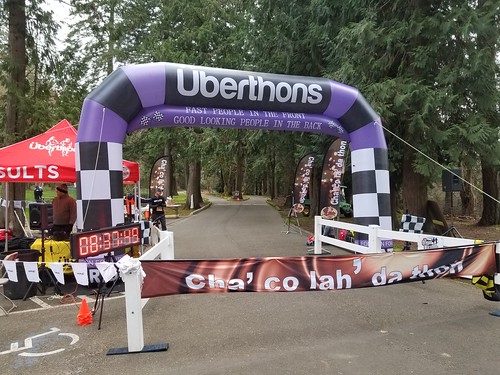 What happens if you combine chocolate and running? You get Uberthons’ February event, known as the Chocolatathon.

Race day was February 10. The sky was clear and bright, and it was about 40 degrees outside. I dressed in a longsleeve tech shirt, with a short sleeve Uberthons shirt over that, and shorts. I was a little cold driving to Cook Park, but I sort of acclimated by the time I parked and jogged to the staging area with about 20 minutes to spare before race time.

Warming up the crowd, so to speak, were co-announcers Margo Glass and Greg LeBlanc, who could take over one of those morning TV talk shows together if they get tired of their day jobs. They delivered a mixture of race information and audience banter, including one set of questions to a group of young runners about whether 30 seemed like old age. “There’s no old age,” the youngsters said optimistically. (If you ask me, “old” is my age + 15, which is now setting the bar pretty high….)

At 8:45 a.m., we started. I was more or less in the front group, as Greg LeBlanc had suggested that anyone at an 8 minute/mile or faster pace go up front, but I missed out on getting into the first wave.

My actual start time, therefore, was 8:47 a.m. The usual Uberthons race course in Cook Park runs from the picnic/playground area toward the train track and then turns north into Durham City Park for a loop through the marsh before returning and continuing past the start area to another loop past the baseball field on the west side. If you look at the map of the course, it looks a lot like a snake with a rodent stuck in its stomach.

That’s what I was expecting, anyway. However, after a relatively restrained first half mile, I was surprised when I passed underneath the train track and saw that the runners ahead of me were heading south, not north, and that a race volunteer was flagging us that way. Whoa, course change!

Heading south took me on a wooden bridge over the Tualatin River. I kept going into the Tualatin Community Park (great Pokemon Go location!) until I reached the turnaround, which was about a mile into the race. From there, I reversed direction and ran back to the train track crossing. I guess I was kind of dialed into the run because later on I found out that my friend Jessica Mumme had said “hi, Tung!” as we passed each other somewhere during that stretch, but I hadn’t noticed. Anyway, I picked up the familiar route into Durham City Park. That’s a fun part of the run because it’s heavily wooded and feels a bit isolated, but it also sometimes smells of hydrogen sulfide – particularly strongly that morning, for some reason.

At the very end of that loop was a short, steep hill. I charged up the hill without concern, because I knew there would be a chance to recover on the descent as the route headed back toward the train crossing. From there, it was all the way back to the starting area by way of the playground. At the start/finish line itself, there was a volunteer holding up a sign directing 5K runners to the left (i.e., finish) and 10K runners to the right (i.e., do it again). Just like last year, I found myself wondering, why oh why did I sign up for the 10K instead of the 5K?

The second time through was like the first, but a bit more miserable for me. I thought I had been relatively restrained at the start of the race, which should have left me in better shape for the second half, but alas, no. What really helped me slog through the back half of the 10K was having Mariah Jeffrey (a frequent Uberthons participant and occasional pacer) a few steps behind me. After the race, I found her in line for the chocolate treats and thanked her for pushing me the whole way.

Anyway, after a s-l-o-w mile 5, I managed to recover a bit of energy and picked up the pace for the last 1.2 miles. As was typical at Uberthons races, I could hear the announcers calling out the names of finishers well before I got near the finish line. I’m on my way! I said to myself.

The last stretch was a short curve from the playground area to the road toward the river access area of the park, then curving back to the start area. I mustered a small kick at the end, partly motivated by the goal of getting ahead of a group of 5K runners who were also finishing their run. 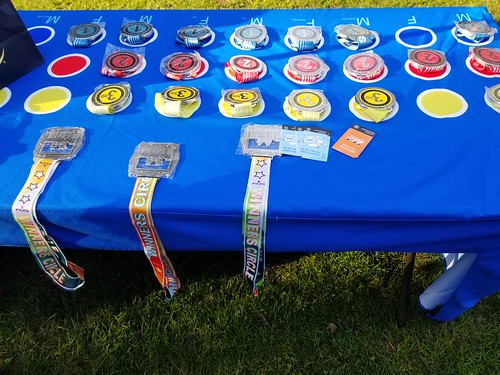 Throughout this time (i.e., while I was lounging around after finishing), race director Darwin Rasmussen had been announcing all the 5K winners, from the overall top 3 (who received pineapples for #1, dragonfruit for #2, or coconut for #3) to 45+ top 3 and 65+ top 3, to age group winners. That is a lot of winning bling handed out, considering the age groups span 5 year increments! Not long after, he moved on to the 10K results. To my surprise, I ended up with the #1 spot for 45+ males – but kind of by default, because the overall top 2 male runners were 45+ guys, and Uberthons does not “double dip.”

This has always been a fun race. Cook Park is a nice venue for races, and the chocolate theme of the post-race food is hard to argue with. The weather in early February can be unpredictable, but for this year, it turned out about as well as could be hoped.

The next Uberthons race is the Luckython at The Reserve Vineyards and Golf Club.