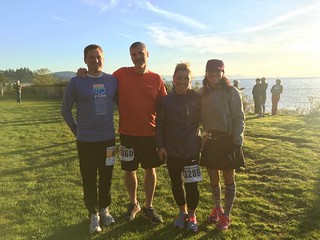 We had a beautiful morning for the Great Columbia Crossing

I came across the Great Columbia Crossing while making a bucket list last fall. The Astoria Column was on my list and as you look out from the top of the column, you can’t miss the enormous Astoria-Megler Bridge connecting Oregon and Washington. Pedestrians are not allowed on the bridge except one day a year for the Great Columbia Crossing 10k. For two hours the bridge is limited to single lane traffic, allowing runners and walkers to utilize the other side. I gave the event a quick glance and decided to maybe try it next year. A couple of weeks later, I considered it a sign when Matt was unable to run it due to a family conflict and decided this was the year to run something new.  Registration was quick and you could opt to purchase a t-shirt and chip time, otherwise just pay for the cost to run/walk the bridge. I have more than enough race shirts, but decided to pay the extra $5 for an official time. I always appreciate having options. 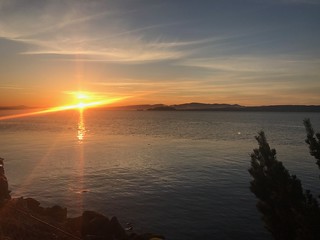 The weather could not have been better, especially considering this is at the coast. I got there super early, since packet pick up ended at 6:45am and the last shuttle left to cross the bridge at 7:30am. I picked up my clam bucks, race bib and waited for the shuttle bus. It was an eclectic bunch around me, some sporting 2017 Boston Marathon gear and others so bundled up it reminded me of the scene in A Christmas Story. I reluctantly left my coat behind and boarded the bus, concerned I was going to freeze on the other side, but not sure of my options.

Being the dork that I am, I hopped into the front seat directly behind the driver. I wanted to be able to look out the front window and be close to the heater. I didn’t realize the front seat meant that you were the lucky person who got to read all the ‘fine print’ points of the event. I resisted the urge to use ‘Breaker, Breaker’ and paid the price for my seat. There was an adorable couple across the aisle from me who asked me if this was my first time running it. It might have tipped them off when I was playing twenty questions with the bus driver, but they filled in the details. They’d know, too, since they’ve been participating in this event since it started 35 years ago. They reminded me it was cancelled last year due to high winds and that they’ve had a few years that the weather kept them away, but they only had great things to say about the Great Columbia Crossing. 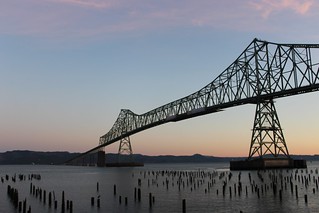 There were signs at packet pick-up noting that bags were not allowed, so I assumed they didn’t offer a bag check. Once I got to the starting area, I realized they did offer a bag check at the start. It’s quite the wait once you’re shuttled from the finish area to the start at Dismal Nitch, but the views make the time pass faster.  Runners were able to start 15 minutes before the walkers and I loved this aspect of the run. You still have the usual weaving at the start, but it was nice to have separate waves. We lucked out with the weather, it was gorgeous and sunny- a little breezy, but pretty much perfect running weather.

So many times I wanted to stop and take a picture, the views were indescribable. The course was mostly flat with two decent climbs and a straight shot, no way to get off course. The bridge is completely paved and stable and would only make someone with an EXTREME fear of heights nervous.  There were several first responders throughout the run, instead of traditional volunteers and only other participants on the bridge. There isn’t a lot of support along the way, so plan accordingly. There are no water stations along the bridge, so if you are someone that needs a lot of water, you should bring some along. I was happy my new friends on the bus had warned me that it feels like you’re done when you come off the bridge, but there still is an out and back loop on the road. They knew what they were talking about. It was very well marked and fun to see runners in front and behind you as we ran in. Water, bananas, cheese strings and juice were waiting for us at the finish line. I was excited to clean up a bit and go use my clam bucks. It was a great excuse to explore the quaint and historic coastal town of Astoria. I loved everything about this unique event and it was a nice change. Learn from me, though,and plan to pack plenty of warm clothes since you wait for a chunk of time at the starting line and don’t sit in the front seat of the bus if you have a fear of public speaking. Definitely put this run on your bucket list, the views are breathtaking. 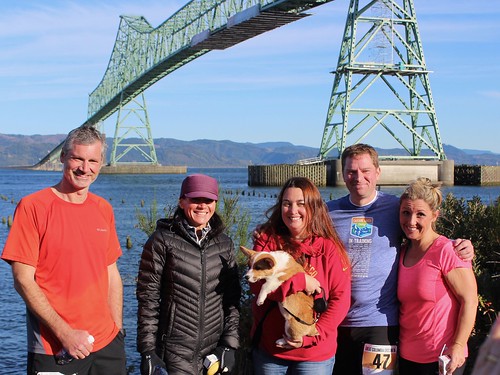