When you look at a race calendar, you’ll notice that most races take place in the morning, which often makes for early wakeup times on the weekend. Occasionally there will be a later start, or also an evening race to enjoy. The Twilight Half Marathon/10k/5k race is one such evening race that I have had my eyes on for a few years now, and I was excited that this year I was finally able to participate. The race offers several things that make an event attractive to me: Vancouver Lake Regional Park and its surrounding paths are a new-to-me area to run, the variety of distances allows me to pick the challenge that fits into my current abilities, the shirt is has unique and beautiful design, and the post race food and drink promised to be delicious.

I arrived at the park about an hour before start time. Traffic flow was well organized, and I was pointed into the overflow parking area, which was right next to the start/finish and the vendor and food area at the north end of the park. I met up with some friends, then went to pick up my race bib and shirt. The organizer had offered us to choose between two different print designs (“wild” with picture of a sunset on the back, and “mild” which was all purple) and two different styles (t-shirt or tank), and I could see participants wearing a good mix of all styles. 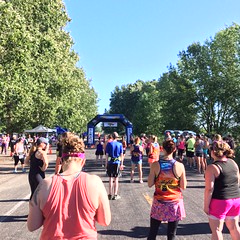 Start line announcements were also amplified at the packet pickup/post race area, so we were well aware when the half marathon started at 6pm, and I made my way over to the start line, where my 10k would start at 6:15 (and the 5k another 15 minutes later). The announcer kept us entertained by polling us on past participation in this race, gave some race instructions, and sent us off promptly at 6:15.

The first half mile of the out-and-back course was very flat and partially shaded in the southbound lane of NW Erwin O Reiger Memorial Hwy, until we were able to turn onto the paved biking/walking path that runs alongside the road. Once the path turned westward, it was very sunny and somewhat hot. (The race’s tagline “run when it’s cool” may have to be reworked 😉 ) Because of the heat (at 85* not excessive, but more than I was used to recently) I slowed my pace and picked my “pace buddy” who I promised myself I would keep within sight throughout the race. The first aid station was set up just before the 5k turnaround spot, and cheerful volunteers were handing out water and Gatorade. (After a bad experience drinking a new-to-me electrolyte drink at a race, I always appreciate it when the volunteers know the brand of the drink they are serving!) I took some of both and carried on with the race. 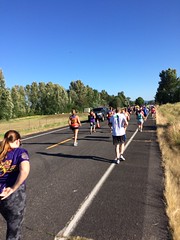 The next mile of the course was quite exposed and hot, and a seemingly long straight stretch along the road. There was, however, a nice view of Mount Hood and Mount Saint Helens. Soon some trees came into view, and the path curved to the left into Frenchman’s Bar Regional Park. We crossed a road, the Columbia came into view, and we looped around the playground and picnic area. We then reached the next aid station by the park’s bathrooms, and thankfully this was also the turnaround point for the 10k.

The return trip was uneventful, but hot, and a bit slower than I had hoped. The volunteers at the 5k turnaround aid stations were still cheerful and helpful, and soon I was in the last mile of the race. The finish line was in sight, and several runners who had finished ahead of me were cheering on the runners. I crossed the finish line and gratefully received my medal. The sparkly owl medal with black ribbon seemed to be reserved for the half marathon finishers, while I (and most other 5k/10k finishers) received a cute round medal. Just a few steps from finish line, Huber Timing had set up their instant results tent with several iPads where you could check your time and placing. Right next to the results was another water/Gatorade station. 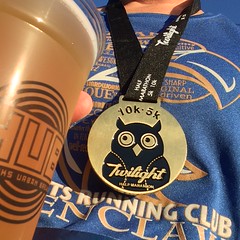 Over at the post race party, I went to stand in line for the beer first, since lines for both beer and food were quite long. Volunteers came by and offered all those standing in line a cookie and crackers. Hopworks had several beers and ciders to choose from, which is always nice. The tamale and chips were also delicious, and in addition there were rolls, pickles, chips, and cookies to enjoy. The live music was lovely, and the temperature was cooling off. I finished my foods and headed out (since I had an hour drive home ahead of me) just before the awards ceremony was to start.

Overall, a very nicely planned and executed race! The course is beautifully flat with nice views. The course support and post-race offerings are excellent. I can definitely recommend this race! Full results are posted here.