Just four weeks after running the HTC Race Series Hippie Chick Quarter Marathon at Hillsboro Stadium in May in the cold pouring rain, I returned to the same locale for the HTC Race Series Helvetia 10k, hoping for some better weather conditions. Race morning was cool (in the 50’s) and overcast when I arrived at the stadium around 7am, just about one hour before race start. There was still parking available in the stadium lot, but also plenty more space just half a mile away in the Nike parking lot across the street.

Packet pickup was quick and easy, and there were no lines at the (flushing!) bathrooms within the stadium, so I had plenty of time to take my race shirt and swag bag back to my car and take advantage of its warmth before heading back to the stadium. (Gear check would have been available as well.) The 25k bike ride started first at 7:45am, and after the bikes were on their way, runners of all three distances (10, 15k and half marathon) were called to the start line for the 8am start.

After the National Anthem, the race started right on time. I positioned myself near the 10 min/mile half marathon pacers to get started near my goal pace. For the first mile of the course, the road was completely closed to traffic, and the crowd of about 1,800 runners and walkers had a chance to spread out before turning north onto Brookwood Pkwy to “leave the city behind,” as the race’s tagline promised. The course continued gently rolling with plenty of space to move. The water station around mile 2.5 offered water, Nuun electrolytes, and bathrooms, and I gladly took some water. At this point, it was starting to mist a little bit, but the roads were still dry. The sign for mile 3 came and went, and I picked up some speed downhill  to then tackle the short but steep uphill at mile 3.5. 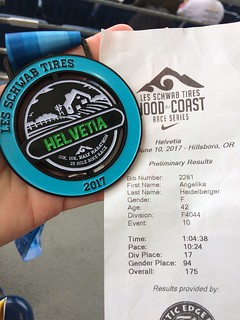 Soon I approached the split between the 10k (turning left to return to the stadium) and the 15k/half marathon (turning right to cover their additional out-and-back and loop, respectively). This split in the course was very well marked (as was the rest of the course), and with the many, many signs announcing the directions as well as a volunteer shouting out the same directions, it would have been extremely unlikely for someone to miss the turn. The weather was still hanging in there, my legs were feeling good, and I was able to speed up a little bit on the final mile. The volunteers at the aid station around mile 5.5 were very cheerful and encouraging. I kept the pace up and soon was able to hear music and announcements from the finish line. My Garmin chirped at me, announcing the completion of six miles, just as I turned into the stadium parking lot that would lead me to the field and the finish line.

Right after the finish I received my finisher’s medal and a cold bottle of water. I walked a lap, looking at vendor tents while catching my breath, and picked up my results slip at the timing tent (a fun perk offered by Eclectic Edge Timing Service!). The misting turned into a sprinkle, so I made my way to the upper level of the ball park, where I found myself a Full Sail beer and delicious Helvetia Tavern Burger. 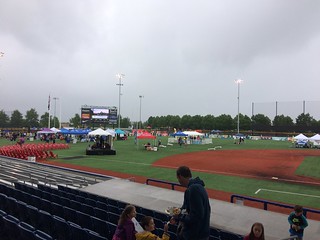 Sitting in the bleachers, watching run finishers of all three distances reach the finish line, I was thankful for the roof since the skies had opened up and it had turned into quite the downpour! Since my warmup clothes were in the car, I didn’t linger too much after I finished the burger, and headed back home again, feeling accomplished and happy about the event.