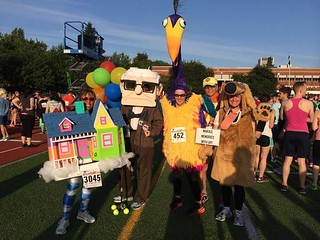 The first time I had ever head of the Starlight Run, I was innocently hanging out with friends anticipating the Starlight Parade. I had absolutely no idea there was a 5K race before the parade and was shocked and amused to see a man running zig-zag through the street and handing out high fives. He was dragging a heavy-looking parachute behind him while wearing a full suit, sunglasses, and holding onto a briefcase with fake money snapped in the hinges. I had just witnessed D.B. Cooper racing down the road! After discussing this with my husband and trying to determine if this was the start of the parade or not, an eruption of the rest of the 5K participants barreled past. Nearly all of them in costume. I was hooked.

The Starlight Run is fun for so many reasons. The crowds cheering, high fives all around, the thrill of leading off the parade that is in turn, kicking off the Rose Festival. It is “Portland’s party in the streets”. A big part of that party (but not mandatory) is all the entertaining, festive, and completely outrageous costumes. After years of watching the Starlight Run and squirting the runners with squirt guns or misters, I joined in my first as a runner when the theme was “Making Memories”. It didn’t take long before I was swept up in a group with an idea to go with the theme and I started crafting my costume. I was to transform into Carl Fredricksen, or sometimes known as “the old guy in the Pixar movie ‘Up’.” 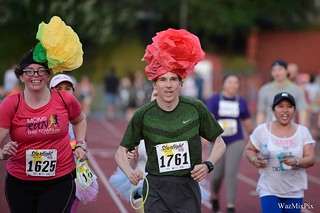 Last year, I joined Joe Dudman for the Starlight Run and he graciously donned a tissue paper rose on his head and chased my little ladybug-kid (that was flying down the course too fast for me to catch). No matter if it’s a simple or overly elaborate costume, you’ll find it all… and why not? There is a costume contest at the “before party” located at Lincoln High School. The participant who receives the loudest cheers is declared the winner, and there are some pretty fantastic prizes up for grabs.

If you want to run in costume, but still unsure about the experience, here are a couple of tips:

Without the context of the “party in the streets”, without the shroud of other runners also donning costumes… go out into the world and log at least one mile, if not two. You will feel completely ridiculous for it, but it is necessary.  I once caused a car to swerve and pull over for a better look at me as I test ran a ball gown for 5 miles.  Despite this humiliating and hilarious experience though, I would have suffered from awful chafe wounds on my arms where the elastic poofs on my sleeves were attached.

The most important piece of advice I can offer is to have fun.  The whole experience is unlike any other running event in Portland.  Savor it.  If you are in costume, you will get cheers, pleading from kids for a high-five, and if you happen to be adorable, kids in the sidelines might jump out in the street to touch your costume.  Be  careful of that.  Carl’s eyes weren’t so good, even with large holes carved out of the styrofoam, so I was fortunate to have two friends “spotting me” to help me navigate through those fans, 4 feet and under, jumping in front of my trotting feet.  Running with the “Up” theme characters is one of my highlights in my running experiences and I will never forget the joy on the kids faces when they saw us be-bopping up the course and the shouts, “Look Mom!  It’s “Up”!”

This year’s theme is “Brilliant”, and I can’t wait to see the brilliant ideas that come up this year.