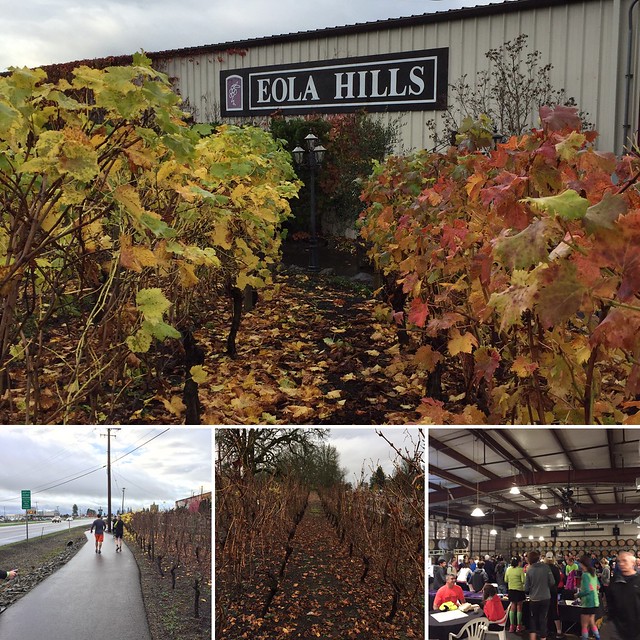 For a race so close to me (a mere 13 miles), it was surprising - even to myself - that the Eola Hills "No Hills" race was one that I have never attended. I'm also pretty sure it is the only Willamette Valley Road Runners event that I had yet to participate in too. Cross those off the list! Saturday, November 12th brought overcast skies, but warmer than anticipated temperatures and only a bit of rain to the valley. The city of Rickreall had a population of 77 in the 2010 census, but almost 300 runners flocked to this small town to participate in some great off-season racing.

Parking was a cinch, as there were endless spots at the Polk County Fairgrounds across the street from the starting location of Eola Hills Wine Estate. Packet pick-up was great – indoors and out of the rain – although the lines got a little crowded as race time became closer. The inside of the winery is actually pretty spacious, with a bunch of tables and chairs available to relax in pre-race. There was also plenty of space outside to stretch and get some pre-race running in.

The course itself was essentially a giant “U”, starting at the winery, heading south along the paved path, west on Orrs Corner Road, and a short jaunt onto Bowersville Road before turning around. The 5k looked like it completed its turnaround after a turn on Riddell Road (off of Orrs Corner). There were volunteers at the small number of intersections, and they all did a great job. Traffic was relatively quiet on the backcountry roads, though it was a bit busier than I anticipated, I’m assuming since Orrs Corner is one of the “major” roads between Rickreall and Dallas. However, the shoulders were about the width of a bike lane and drivers were very cautious, so I never felt worried. There were a bunch of us runners stretched along the roads, so we were easy to see!

The race lived up to its name – as it was definitely a flat course tucked amongst a variety of hills in the area. There were only slight variations in elevation on some turns, but they were minimal at best. There was also a short unpaved section (Bowersville Rd.), but other than that you are just looking at 4 total (!) turns and a curve around the out-and-back. It doesn’t get much simpler and faster than that.

After the race, there was free and delicious pizza from Monmouth’s Yeasty Beasty and free wine from Eola Hills. The atmosphere was warm and inviting as wet, sweaty, and tired runners relaxed among the wine barrels. The winery is definitely a place that I want to return to – and evidently will have plenty of opportunity to do so, with their wide array of events. I also want to run this race again, as it’s the perfect one to mark on the calendar for PR purposes!

The race was put on by the Willamette Valley Road Runners and benefitted Dallas HS Track & Field and Cross Country programs, so it was all around a good day to get out there and support local entities!