The Veterans Day run at Sandelie Golf Course in West Linn was advertised to be a "cross country style race" on grass and trails. This fall however, we had record breaking rains in October, which made the ground everywhere much more soggy that one would expect for early November. The first impact this had on the race was the fact that the parking field less than a quarter mile north of the golf course was too muddy for cars. HTC reacted in a timely manner and several days before the event (and again one day before) sent out an email saying that parking would now be at Wilsonville High School, and shuttle buses would take us the four miles to the start.

It was not raining yet when I left my house to drive across town to park at the high school. Four school buses were waiting for runners to arrive, and I hopped on after parking the car. It was cloudy, but with breaks in the clouds to the east, and the sunrise was golden and orange and beautiful! I think every single person on the bus tried to get a good picture. By the time we arrived at Sandelie Golf course (about 10 minutes later), the sun golden glow had faded, but instead there was a huge double rainbow to the west, glowing bright against the dark gray background of the clouds moving in. 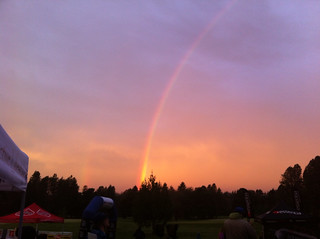 I picked up my race packet without problems or delays, walked a loop to look at vendors and picked up some freebies, then checked my bag to get ready for the start. It had started to drizzle heavily by the time the kids run started at 8:30, and at 8:50 the 5k runners were lined up at the start line for the National Anthem and a moment of silence to remember our veterans and fallen service members. The 5k started right on time, and the ground was certainly soft and slippery from recent (and current) rains.

The course started out on fairways, clearly marked by flags along the sides. Five minutes into my run, I heard the countdown for the 10k/half marathon start, which started after the 5k to allow for a slightly different course right off the bat. The first aid station was located at mile 1, and I was still feeling good and skipped the water/Nuun/Clif shot offer. Shortly after the aid station came the first downhill to a creek crossing. Usually I like to go a little faster downhill, but with the uneven path and slippery rocks I took it a little slower. This was also the point when the first 10k-ers were passing me, so stayed to the side. The bridge across the creek would have been very slippery, but rugs and non-skid mats helped tremendously. A steep gravel uphill brought us to the first split of the 5k and 10k/half courses, which was both marked with spraypaint on the grass, and staffed by helpful volunteers. 10k went straight, while 5k turned left and circled back down again to the bridge, followed by another uphill. The rest of the 5k course was rolling, weaving through the golf course, on soft to muddy ground. I was glad for my Pearl Izumi trail shoes, since I saw and heard other people slip and slide quite a bit at some points. There were several more water stations, and every time the course split, volunteers were there to help find the right way. 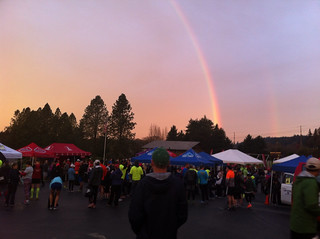 At the finish, I got my finisher’s dogtag medal and a bottle of water. After catching my breath, I picked up my free beverage, as well as soup, bananas, oranges, and grilled cheese sandwich bites. The rain had slowed, but I didn’t linger much longer, since I had to get back to family obligations. The school bus picked us up in the same spot where it had dropped us off, where we could cheer on the half-marathoners starting their second loop. A quick busride later I was back at my car, and heading home.
Overall, it was a well organized little race. Running on the golf course didn’t make for my fastest time, but it felt good on knees and ankles. The location is beautiful, conveniently located to my home, and start/finish amenities and entertainment were nice.