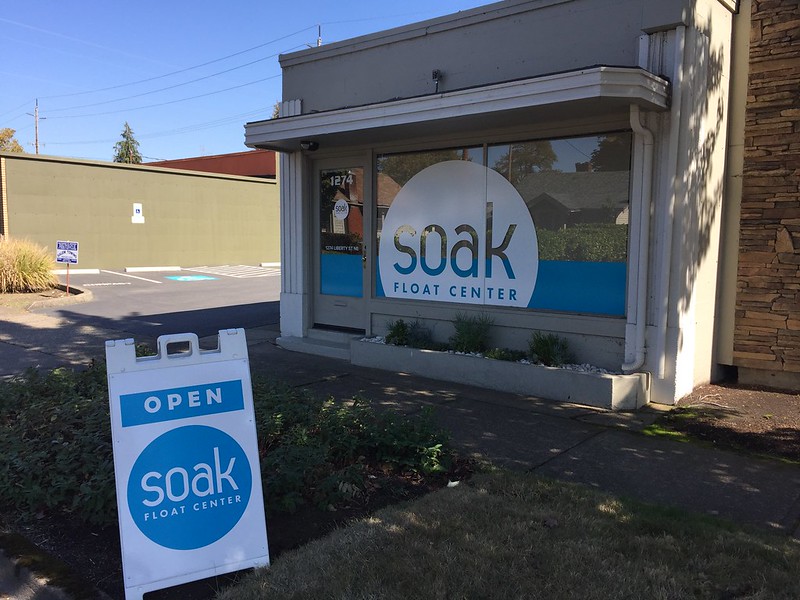 I open my eyes, but can not see. I hear nothing but the long breaths I draw in. I am half naked, and my body seems to be suspended on some warm liquid, yet it feels like I can't tell where the water ends and I begin. Where am I? Despite my size I feel light and relaxed, gently bobbing like a cork in water - never being able to fully submerge and succumb to the liquid below. I reachmy hands out and feel a smooth warm structure on either side of me. Even the gentlest touch of these propel me slowly the opposite way...I think. Again, where am I? And why do I feel so good? The above narrative, while a definite stretch as to what was going through my head while laying in a pod of Salem's first and only solely dedicated float center, does actually have some merit to it. I have heard of float centers (and their benefits) with increasing frequency, but it took me driving past Salem's Soak Float Center on my way home from work, before curiosity got the best of me and I contacted the owner to help me understand better more about "floating" and how one ended up in the Capital City.

Being a Salemite, I realize the city’s limitations. With the number of government workers continually coming into the city only between the hours of 8am-5pm, Salem (and the downtown area specifically), hasn’t historically been an environment open to change and trying new things. Only recently, does there seem to be a little upward movement, with new condos, restaurants, breweries, and events popping up, but I would have thought that something as “niche” as a float center would have been light years away.

Owner Joe Thomas, who resided in Portland until recently, has his own story about how he became involved with float centers, and how it came to be that one ended up here in Salem.

In June of 2015, Joe Thomas, owner of Soak Float Center, was in a near fatal motorcycle accident. He was racing at Portland International Raceway when a fluke accident happened and he was thrown from his bike into a metal pole. He broke all of his ribs front and back on the left side, broke his shoulder and back, collapsed both of his lungs and severed 40% of his left lung, which had to be removed. He was on life support for over a week and has undergone several surgeries to try to put him back together.

Prior to the accident, Joe was extremely active in his sports and lived life to the fullest. The extreme toll the accident took on his body required extensive and painful recovery time, most of which was to be spent sedentary. As anyone knows you leads an active life, this can feel like a death sentence. Prior to the accident Joe’s mental health and happiness very much stemmed from his physical health and happiness. After the accident his life was consumed with pain management consisting of numerous medications, often requiring him to take every 2 to 4 hours. The pills were not working, wrecking his stomach and trapping him in a lifestyle of constant pain, pills and sleep deprivation. As anyone would do in this situation he desperately reached out for alternatives but nothing was helping and his mental health was taking a toll as well.

Finally someone mentioned Floatation Therapy and told him about where to go in give it a try. For the first time in 3 months, he slept.  It took about 24 hours before the pain started creeping back in and he began to doubt himself – did he make it up in his head, did it really help? During the 2nd and 3rd times floating the same thing happened and he began to find hope.

The relief was so significant and deeply felt that he wanted to share it with his sister. It was not long after the float with his sister that the inspiration to help others was born and immediately put into motion. We all want to find meaning in what we do with our lives, we want to find joy and purpose, we want to have fun and we want to share these things with others. Some of us define this as our legacy. It was in the opening of Soak Float Center that Joe realized and began to live his legacy and share it with others. Not only was Joe given the gift of life in surviving his accident, but he was given the opportunity to impact people’s lives in a more profound way then he could ever imagine.

Despite a float center and all the discussions (and visuals) of “pods” and “hovering” in “insolation cabins” lending itself to a science fiction, there is actually much more science than fiction. More and more studies are being done, and there are claims of benefits ranging from pain relief and stress reduction to improved focus. So, what is floating, exactly? Well, basically it is a fancy spa tub filled with about 10 inches of water that is filled with over 1100 pounds of Epsom salt (creating the extremely buoyant environment). This allows our bodies, to actually stop fighting gravity and relieve pressure on the body. When you add in the “sensory deprivation” aspect, the idea is that the brain will reach a point where it slows its processing need and allows your mind a more restorative rest. Check out reputable sources such as Time, who did a nice story on it. There are also a variety of studies on floating which yield such benefits as:

Joe allowed me to try my hand, and body, at a few soaks. My initial test, was a 60 minute “session” in one of their pods (followed up by a 90 minute session in their “cabin” a week later). I’ll be honest, the pod truly looks like something out of a science-fiction movie, maybe like this new one or this classic. But honestly, it’s not that intimidating once you get used to it. And Joe really does a great job of easing the nerves. He says that even those who have challenges with vertigo and claustrophobia have not felt anticipated ill-effects.

In each room, there is the pod as well as a shower, and a spot to keep your clothes and bags. There are actually 2 rooms with pods and 4 rooms with “cabins”, which do the same thing, but are rectangular in shape and much longer, wider, and taller than the pods (in comparing the two, I much preferred the pod, which was surprising to me). I was given some details about how to operate the pod, but here is a good FAQ for future reference. Each room is equipped with potential essentials. The silicone ear plugs are a must, and there are Band-Aids available for those who may have cuts or blisters (with all that salt, that could be one painful experience). There were also sandals and a robe available should I have needed to step out to use the restroom (I highly recommend going before hand).

After a quick shower, I stepped into the pod and was surprised just how little water was actually in it. The 10-12 inches had me wondering how the heck I was going to float. I’m a relatively bigger guy (190 pounds) so I had my doubts. I pulled the lid down,  turned off the lights, and just left myself go – more buoyant than I expected. It was a trippy feeling. Before turning off the lights in the pod, I got a little visual of my surroundings. Despite being tall, I did not feel too cramped, as there was room to maneuver if necessary.

I don’t really even know how to put into words what it feels like to be in complete darkness, confined to a small unit, completely suspended on water, with nothing to listen to except your own breathing. It was a little disconcerting for the first few minutes, as my body was definitely not fully prepared for it. My neck initially became tired as I dumbly noticed I was subconsciously trying to hold it up above the water for the first 5 minutes. After I noticed this, I started to become a little more relaxed and in tune with my body.

Laying in complete darkness, with no sounds, no technology, no outside interferences is something that takes a little getting used to. You are just left alone with your thoughts and your body, not generally something most of us are familiar or comfortable with. I don’t know about you, but much of my life with work and family is dependent on schedules and times. At one point, I remember realizing I had no idea how much time had elapsed – it could have been 15 minutes or an hour and 15 minutes – I just didn’t know.

At some point, five minutes prior to the end, some gentle music comes on notifying me that my time was up. I told Joe afterwards that I don’t think I ever fully relaxed in there, which is not uncommon according to Joe, and why they recommend committing to three floats. I can see how trying and comparing pods vs. cabins, morning vs. evening sessions, and weekday vs. weekend timeslots is a good idea to understand where the best individual results are achieved.

I had anticipated feeling much like I do after a massage or acupuncture session – relaxed, but often a little dazed and out of sorts. I didn’t feel that way after my float – relaxed but not even close to as zombie-like as I thought I would be. My neck and upper back, both of which are where my tightness and stress is held, were extremely loose. I am intrigued to see what another few sessions, in a more ideal relaxed state, will yield.

Even though it’s still not fully mainstream yet, floating  seems to be gaining more traction with each passing week. Celebrities such as Joe Rogan and NBA MVP Steph Curry, have given it more visibility by participating in it, and discussing the positive effects they feel.

If you happen to be in the area, I strongly recommend giving Salem’s Soak Float Center a shot. Despite the location, it looks and feels like a little piece of a Portland or Bend  right here in the Cherry City. Here are some details:

There are a variety of different pricing options: