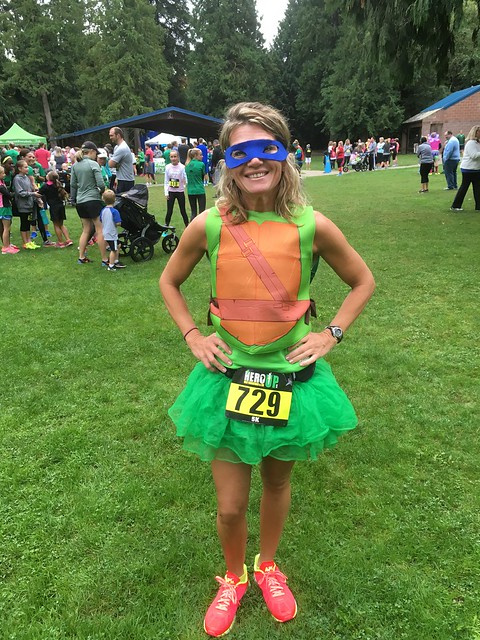 According to my kids, I picked the lamest Teenage Mutant Ninja Turtle for the 2016 Hero- Up 5K

There are events that give back so much more than expected and the Hero-Up Half Marathon and 5K has been that event for me for the past 4 years. There are endless runs out there to choose from and I rarely run events repeatedly, but this local run is special. I knew it was an extraordinary run the first year I lined up and heard the history of the Hero-Up Half Marathon and 5K. After losing their son to a brain tumor, the Burnett family decided to organize a run to raise money for other families forced to cope with a sick child. The run was a way to honor and remember their hero, Keith, who courageously fought a brain tumor at the tender age of three. Keith loved superheroes, so it’s fitting that this event encourages people to come out donning their favorite superhero costume.

A “Trail of Heroes’ line the start of the course.

It fell on a Labor Day weekend this year, which was tough, but there was no way I could skip it and, fortunately, my family understood that. I injured myself the week before this run and the instant that happened, my first thought was missing the Hero-Up Half Marathon. I spent the week icing my hamstring, limiting my exercise and not running, in hopes that I still participate. For anyone who knows me, that says A LOT. I’m pretty stubborn and down right stupid sometimes when it comes to running, but I didn’t want a DNS in my fourth year.

The day before the run, I finally admitted defeat and let the race directors know my dilemma, asking if I could drop down to the 5K. As expected, they were accommodating, but more than that they sent genuine well wishes which was a reminder that you aren’t just another bib number at the Hero-Up. Because it was so close to the run, they would have to pass along the information to the timing company. Embarrassed already, I crossed my fingers and showed up race morning ready to shuffle along for the 5K, but secretly thinking I’d have to deal with the transfer at the race.

The DJ was bouncing along to his music that took me back to middle school, which I don’t want to repeat, but the music was rad. It made you want to dance and kept the energy up, which is always appreciated. As I waited in line to pick up my packet, I was ready to explain my whole ordeal again and get directed to someone who could fix it. It was wasted energy because they had transferred my registration to the 5K, even with super short notice.

Liam and his mom at the finish line.

The cloudy skies and threat of rain didn’t dampen any spirits as everyone lined up. Scanning the crowd, I mentally noted my favorite costumes- Agent Carter, Thor, and some super-powered RN’s were on the list. We ran from Cook Park out towards Tualatin and there were volunteers the entire way. Super volunteers at that, I can’t tell you how many times they reminded me to keep going with huge, infectious smiles. The water station made me smile big, time. Just before the halfway turnaround, there was a father/son pair dressed as the Joker and Batman passing out water and a noteworthy Poison Ivy costume too.

I shuffled my way back to Cook Park and the finish line. As I crossed the finish line, I heard a young man cheering for his mom. After she came across, he gave her a high-five and told her how proud he was of her. I had to tell them that witnessing that was my favorite part of the run. Little did I know, that Liam, the young man supporting his mom, was one of the heroes lining the race course. A courageous fighter, Liam was diagnosed in 2010 with a brain tumor that would require surgeries and radiation. Just like I witnessed him cheering for his mom, this young man focused on helping others and created Liam’s $6 Club, an easy way for kids to help other kids.

I went into the Hero-Up Half Marathon and 5K bummed about my leg, but I left inspired, to say the least, and with a little proper perspective. I’ve always loved this run, but this year was especially moving. They have this event dialed in, the course is great, the volunteers are excellent and it’s just plain fun. Bigger than all of that, is the heart behind this one. All of the money raised goes to help kids fighting cancer and they aren’t just dressing up as superheros, they are the real thing. I’m so grateful I had the chance to meet Liam and experience the Hero-Up 5K. This continues to be a run that I can’t even come close to giving back what they give me.