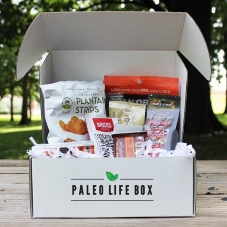 Description: "Paleo Life Box is about simplifying the effort it takes to discover and try new paleo snacks. Paleo people are always looking for new snacks because it keeps the lifestyle fresh, but finding them isn't as easy as a trip to the supermarket. We solve that by getting a variety of snacks to you all at once!"

Like many runners, I like eating, and I'm not immune from snacking. Some of my favorites include Popcorners, sardines, and fruit strips. When I had the opportunity to try out a sample delivery of the Paleo Life Box, I was game for it. I'm not exactly a paleo eater, as I like bread, rice, and soft drinks too much to give them up. But I like meat and vegetables and fruit, so it wasn't as if the paleo snacks wouldn't appeal to me.

The shipment arrived just before I was heading out on a driving vacation trip, so I brought the box and shared (a bit) with my family. I received a total of seven products: three sweet dessert offerings, and four savory ones. It works out to an average of $5 each, but as you can see, there are of varying sizes. I did a quick and dirty check on Amazon to see what it would cost to assemble this box on my own, and it turns out that the Paleo Life Box was about on par – and that was using the per unit price for some of the snacks where the listed price was for a dozen. It may have been cheaper to buy directly from the producer, but then you’d have to pay shipping. I had figured that there would be a premium due to the effort of finding the products to include, shipping, and overhead, but I was wrong.

Okay, I’ll say something about the snacks I got to try, although of course the actual products during any given month will vary. Paleo Life Box says that each month, there should be 3 new snacks, with the other 4-6 being “tried and true favorites.” Of the ones shown, the big hits in my household were The New Primal Grass-Fed Beef Jerky and the Wild Zora Meat and Veggie Bar. Most of the time, I prefer savory to sweet, so the dessert ones didn’t register as much with me, and I think some of the ones that were truly paleo – and hence, used no flour – had a mildly chalky taste. (On the other hand, some of the snacks did use a bit of flour, so perhaps the definition of paleo is a bit loose.) The one really weird snack in the group was Bubba’s Fine Foods Snack Mix. It was a mix of banana chips with cashews and pecans, only the banana chips weren’t sweet at all. I thought they were still tasty, but you have to forget about the fact that you’re eating bananas.

If you are on the lookout for new snacks to try, and you are following a paleo-type of diet, the Paleo Life Box offers a good way to exposed to some high-end snacks.