Sunset on the Springwater

Evening races are still pretty rare, so when an event has a 5:15pm start time, it stands out on the list of available races. Terrapin's second annual Sunset on the Springwater half marathon, 10k and family 5k took place on July 23rd, 2016. The weather forecast had predicted a high temperature of over 80*, but I was thankful that lingering clouds stopped the day's temp in the mid to high 70s. Close to 600 participants toed the line for the half marathon and 10k, while many more took part in the untimed family 5k walk/run. Full results can be found here for the half and here for the 10k.

Leading up to race day, Terrapin had sent several emails detailing some important things about the race. One of these was the fact that parking at the Sellwood Riverfront Park would be limited and to look for street parking in the neighborhood. I arrived about one hour before race start, and cars were backing up already. I was able to find street parking about five blocks away, and I made my way to packet pickup. The shirt was a pleasant surprise, as it is a green cotton/poly blend “lifestyle” shirt that I am predicting I’ll wear quite a bit. At this point, lines at the bathrooms, packet pickup and gear check were still short, so I quickly got the important things done before warming up and stretching while enjoying the live music and the view of sailboats on the river. While I was in line for one last pit stop before the race, I watched Mt. Hood Ski Patrol ready themselves and head out on bicycles to provide medical support on the course. 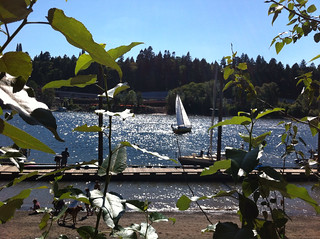 With the post-race party area set up in the park, it was separated from the start line by a parking lot and an office building, and it was not possible to hear any start-line announcements. The only race related announcement made by the musician on stage was the fact that the race would start at 5:30pm, about 15 minutes later than scheduled. I made my way over to the start line around 5:10 and waited with the other runners for more instructions and the start. Half marathon pacers were holding up their pace signs, so it was easy to seed myself in the presumably correct speed group.

When the race started, we were sent off in several waves to alleviate congestion on the course. The announcer did say that this start was for the half marathon and 10k only, but since the family 5k would follow an entirely different course, it would have been good to stress it a few more times. I later saw several people with a 5k race bib on the 10k course, including a dad who was trying his best to keep his young son motivated after they “missed the 5k turnaround somehow.”

The course started on an uphill and turned right onto the Springwater Trail right away. Some of the first half mile was a gravel path right next to the railroad tracks (thankfully no train while I was running there), then a few blocks through a neighborhood before rejoining Springwater again after the water station at mile 1. The next section of the course was straight and mostly level, partial sunshine with mottled shade cast by the trees along the path. After crossing the incredibly busy Johnson Creek Blvd, there were no more trees and it felt quite hot. Unfortunately there was no water station at the 10k turnaround (which was mentioned in the pre-race emails), but I still had water and energy chews left in my fuel belt, so I refueled as I started the second half of the run back the same way we came. As I watched half marathoners going straight ahead, I was happy that I had made the choice to run just 10k and not the half marathon this time.

On the way back headed west, a light, cool breeze was in my face, which felt really nice. I took some cold water and Powerade at the aid station around mile 5, and I appreciated the resident on Linn St. who was watering his front lawn, and offered runners a spray down as well. Soon I was back on the gravel path and could hear the sounds of Oaks Park, and I knew the finish wasn’t far off. I crossed the finish line with a time slower than I had hoped, but fair for the weather and personal form of the day. I received my medal and a volunteer pointed me towards the water and food table in the parking lot just a few steps from the finish line. 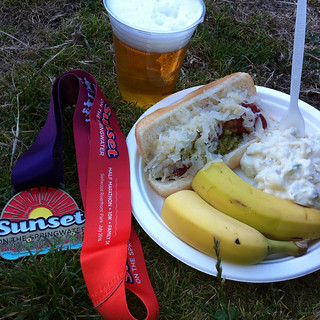 After a cup of water and a banana, I walked over to the post-party area, where I picked up my checked gear bag and stood in line for food. The event’s Facebook page had promised a family BBQ as well as pizza, but all I found was hotdogs and potato salad. Inside the beer garden, Lagunitas was pouring three different beers, and I sat in the shade enjoying my food and drink. I was looking for Two Towns Cider (another sponsor of the race) but didn’t see them there. Live music was playing and families were enjoying the lawn games set up around the park, but I soon decided that I had recovered enough to hike back to my car and head home.

Overall, my own experience with Sunset on the Springwater was quite positive, and the 10k route is not one that is used by many other races (except Hood to Coast’s leg 12). However, the lack of available parking is an issue, and I would have liked to have seen additional water stations on the course. Starting a half marathon at 5:30pm is ambitious, as about one fifth of half marathon participants would have still been on the course as the sun had already set and it got dark. The big park is perfect as a start/finish area, but it’s a pity that the start line is not visible from the park. The race has great potential if it can figure out these little kinks.