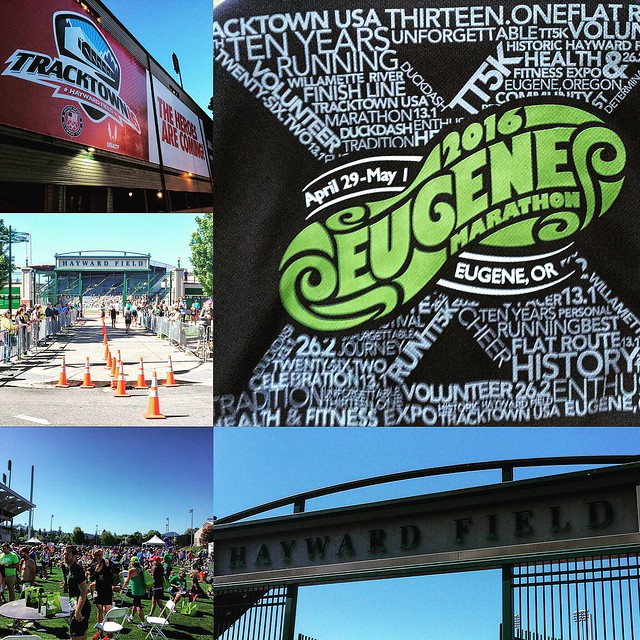 I am generally a pretty positive reviewer. I don’t believe my role when discussing races and products should be “bash and dash” in nature, where I am critical about things that didn’t live up to expectations without expressing some suggestions, ideas, or comments on how things could improve. Even though I have run in and reviewed hundreds of races, I believe that my experience should be taken as one opinion and not necessarily a reflection of a race as a whole. Because honestly, my experience as someone who generally races between 7:40 and 8:10 minute miles may look extremely different from someone running 6 minute or 11 minute miles. So while I drove home from the 10th annual Eugene Marathon, recapping the experience in my head, I had an internal struggle with myself. I mean, I literally couldn’t come up with one “negative” thing to say. That’s always the internal debate with someone who writes about their experiences – am I coming across non-partial? Am I writing from a neutral perspective? Is my positivity going to come across disingenuous? Regardless of those thoughts, and regardless of Run Oregon’s mission to spread as much positive news about running, I can say that – now a week later – I am still buzzing about race weekend.

I signed up for the full marathon on a whim earlier this year. I have run the half on two occasions in the past, and was going to go for a third. However, on one dreary day in January, I headed to Minto Brown Park in Salem and a planned 8-9 mile run turned into 19. It hit me that maybe I could give a full another try (my first and only being in 2013). The Eugene Marathon, with its 10 year anniversary and flat course, seemed like an appropriate fit.

Unlike 2013, I didn’t really do any real marathon training. I just ran long when I felt like it and increased my miles over the span of a few months. The night before, my brother laughed at me as I fueled with sunflower seeds and Pepsi at a baseball game. My continued lackadaisical training concluded with waking up at 4am to drive to Eugene. Clearly– do as I say, not as I do!

I was happy that I left early, as I was able to secure some street parking really close to Hayward Field AND really close to the port-a-potties. Even with an early morning, I didn’t feel too tired, as the energy was already buzzing. The sky was starting to lighten as volunteers were setting up the starting area and the Hayward Field sign of “Tracktown USA” was starting to come alive. There wasn’t a cloud in the sky, and it was evident from the start that the ghost of Pre was ensuring a great experience for all.

I made my way over to race-day packet pick-up (I loved that the pre-and post-race festivities would be right on-site), which was a breeze and took in the empty finisher’s area. I saw the signs with all participants listed under which state they hailed from. I saw the quiet tents and open turf area, which I knew in 5 hours would be full of exhausted, smiling, and stretching finishers. I witnessed bag check volunteers receiving their instructions. It was perfect.

As time went on, more and more people neared the corrals for some last minute stretching. As there were runners from all 50 states, I ended up eavesdropping on so many great conversations from outsiders describing their experience running earlier in the week at Pre’s Trail and Pre’s Rock, talking about how green everything is in Oregon, expressing disbelief as to how many great breweries there are around. People were dressed in shirts with logos from all over the country (and world). It’s times like these that make me appreciate living in Oregon, as well as further confirming that running is one sport where you can continue to have great experiences all over this great country.

Shortly after 7am, runners took off from the shadow of Hayward. Staggered starts were absolutely necessary, as even with them the first few miles can get pretty congested. I learned this a few years ago, and have since understood that the best thing to do is either push out fast or just find a slower stride and enjoy the camaraderie with others. I chose the latter.

Things started to slowly thin out with each passing mile. The out and back along E Amazon and W Amazon were opportunities to start stretching things out a little bit more if desired. There were more opportunities to pass at that point. The short hill near mile 8 further slows down a little big and allows for some additional thinning. All that being said, I personally never felt like I didn’t have the opportunity to increase of decrease my speed if I wished. It was busy but never claustrophobic (aside from the very start).

Passing back in front of Hayward Field at mile 9 is always great – for both half and full runners. It’s the culmination point, and spectators are already lining the chute to the finish. You get a little taste of the end, but you know you still have some work to do and provides a little motivation to know that the next time you see it you will be basking in glory. I personally also got to see the super-fast leaders of the half marathon returning to the finish – which is always an exciting and humbling sight.

The half and the full split off just after mile 10, with the longer distance heading east into Springfield for a while. For obvious reasons, things really start to thin out here. I was happy that a group of 3 gentlemen, probably 20 years my elder, were cruising along around my same pace. We ended up matching each other stride for stride for the next 10 miles or so, something I know helped keep my head in the game.

And that was necessary, because near mile 14, my brain started to feel a little mushy. Up until that time, I felt really good and steady, but I think thw 4am wake-up call was coming back to haunt me. I just felt a little depleted. I think it was a combination of a banana at mile 14 and those running guys who pulled me quickly out of my funk. By mile 15 I was back on pace with where I wanted to be. Mile 16 put us in front of Autzen Stadium and into Alton Baker park (where I have run dozens and dozens of times). I knew the final 10 miles were going to be familiar paved trails along the Willamette. I have done training runs and participates in races on these same trails, so I was able to understand where I was best able to conserve my energies. The river and parks were beautiful against the blue skies, and even though temperatures climbed a bit by this point, I never found it unbearable.

There seemed to be enough port-a-potties along the course and for some reason, I had to stop three separate times and relieve myself (miles 3, 8, and 15). TMI, I know.  I mention this only to highlight that I found there were plenty of opportunities available. There were also a lot of great hydration stations with wonderful volunteers. They were vocal about who had Gatorade and who had water. I also found them more concentrated near the last half of the marathon – which was perfect given the slow-rising temperatures and the continual need for hydration. I tried to thank every volunteer I took cups from. I found them as model volunteers in every way. And speaking of support, I am always amazed by the amount of non-runners out there with signs and cowbells cheering along runners. And I would venture a guess that the large majority are locals just out there and not attached to any one runner. It’s so great.

The final few miles to the finish were a challenge. I know you aren’t likely reading this to read about how I personally did, but by this time my left hip was experiencing a slight throb. My legs were tired, but not injured. And for whatever reason, I wasn’t physically tired to the point where I was praying for the finish line. I even had a little stored up to put on a good burst on the finish through the spectator-lined chute and on the Hayward Track.

I guess the only thing quasi-downer was the fact that Hop Valley (probably my favorite brewery in Eugene) was not providing complimentary beers for finishers. I left my cash in the car and really didn’t feel like heading back after I left. That being said, it’s probably one of the most minor complaints in the history of race recaps.

All in all, I guess the best praise that a race can get is that it got me excited for future events – in this case, I now have an interest in running another marathon (something that didn’t even cross my mind after the first). This is truly one of those iconic Oregon races that I feel runners should experience at least once. I can’t wait for XI!