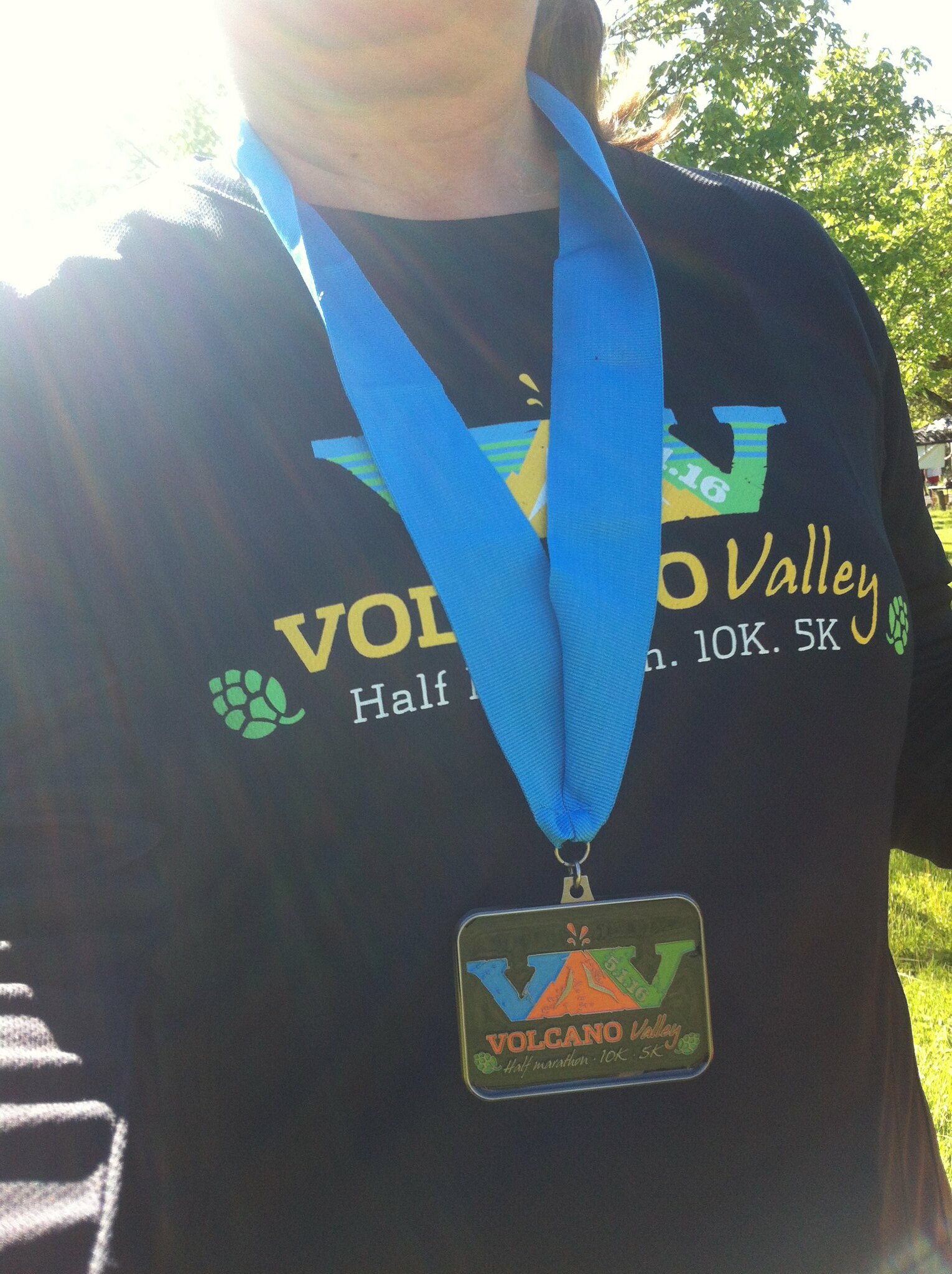 The second annual Volcano Valley half marathon, 10k and 5k took place at Willamette Mission State Park on Sunday, May 1st, 2016. The weather was a perfect sunny morning in the 50's when nearly 600 runners and walkers gathered at group picnic site B inside the state park to run that morning's race. Full results for all distances can be found here. I arrived at Willamette Mission State Park about 45 minutes before the scheduled start time. The park requires a day use fee, so runners either payed $5 for the day-use pass, or the yearlong "Go Play" pass got me in as well. Parking volunteers made sure that runners' cars were lined up correctly in the field, and from there it was just a quarter mile to the start. I picked up my bib, shirt and swag bag with no wait, and held on to my long sleeves until closer to start time before turning it in at Gear Check since it was still quite cool. In the meantime I had a chance to connect with a fellow runner who I had met in an online running forum.

All distances started together at 8am. There was a water table just before the start line (set up to be ready after the finish) so not knowing how many water stops would be on the course, I grabbed a small cup just before crossing the starting line. The course was extremely well marked with chalk marks, cones and volunteers at all crucial spots. You would have to have your eyes shut or be very deep in your “zone” to have missed any of the turns.

The first two miles of the 10k course were along the access road into the park out towards Wheatland Road. It was not closed to car traffic, and I saw two or three drivers come through very slowly and considerately. The 5k ran their out-and-back course on this access road as well, and for a while there was some confusion which side of the road runners were supposed to be on, but since the field was relatively small and already stretched out, I didn’t notice any collisions or major conflicts of runner traffic flow. Exiting the park access road, runners turned left onto Wheatland Rd, and about half a mile later another left towards the Wheatland Ferry crossing. At that point, we turned left again onto a paved walking/biking path (about the width of a golf cart). It was plenty wide to accommodate the participants and allow faster runner to pass slower ones. This path went along rolling through the forest, and although it had gotten warmer since the start, it was still comfortable in the shade. Near the 5-mile mark, the course split for the half-marathon participants to run a detour going straight while the 10k turned left. A little while later the half re-joined the 10k runners for the final mile before the half-marathon turnaround point and the 10k finish.

Along the 10k course I counted six water stations positioned roughly every mile, plus the water station right after the finish line. Each station had plenty of water, considerate and helpful volunteers, and some stations also offered Glukos electrolyte drink. At the finish, each runner’s name was called out as they crossed, I was handed my beautiful medal and a cup of water. I claimed my gear back at the gear check, and enjoyed a peanut butter and honey sandwich on delicious whole grain bread. Rogue Brewery was on site with a choice of two different beers and a cider, and they were grilling up burgers, cheeseburgers and veggie burgers with all the fixin’s. I did not see any water other than the tiny cups at the finish line, and was wishing for a bucket of water bottles or some coolers with water to refill my cup. The award ceremony for 5k and 10k started while I was eating my burger, so I didn’t have to wait too long to find out if my effort was enough for an age group place. (This time it was not..)

Overall, the morning couldn’t have gone any better. I liked the course very much! The course markings were excellent, and the volunteers along the way were fantastic. I wish there had been more water after the finish (or if it was there and I missed it, I wish it had been more obvious), but the food that was offered was perfect to refuel after the run. I look forward participate in this event again next year.