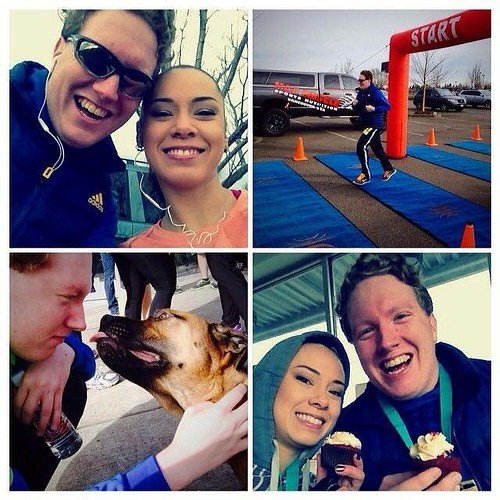 'Sometimes carrying on, just carrying on, is the superhuman achievement.' ~Albert Camus I recently read Suzy Favor Hamilton’s book, Fast Girl and was pretty disappointed with it. I thought it would cover more of her struggles with bipolar, but instead focused primarily on her time as an escort in Las Vegas. There was some running, it included a little history of her family and their dynamics, but I felt it lacked purpose, besides being a crazy sensational story. It’s not that her book was offensive,  I was genuinely curious how an elite runner and mom could find herself being one of the highest paid escorts on the Strip, but finished it with no real answer. I had barely closed the book, when Joe suggested an inspirational runner for me to get to know and the timing was perfect. Jacob Greer had a typical childhood with a younger sister and loving parents, growing up in the Pacific Northwest. He left for college and was registered for pre-pharmacy courses. Jacob attended the first day and then spent the rest of the semester in a daze. He would see friends from the debate team on occasion, but the rest of the term was a blur and not because he was partying like many freshman. While he didn’t know it, he had bipolar, a brain disorder that can cause unusual shifts in mood, energy, and the ability to carry on normal daily activities. It can trigger emotional highs, suicidal lows and everything in between. For Jacob, his bipolar disorder would trigger major depressive episodes and manic episodes. They were mostly dissociative and he didn’t always realize they were happening. Fortunately his professors noticed. When midterms were passed out and Jacob still was absent, they looked into it. He was sent to the school counselor and then referred to an off-campus psychiatric nurse. Finally, in 2007 he was diagnosed with bipolar and would start his long journey of dealing with this often misunderstood disease. While Jacob most likely had bipolar his entire life, it didn’t really get serious until puberty and definitely peaked with life transitions.

The diagnosis and treatment meant that Jacob would try different medications for a healthy balance, but that was only the beginning. The diagnosis was a huge step, but it was just that, a step. Finding the right medication and the proper dosage took time and life continued, ups and downs included. When Jacob came back from school, he lived with his grandma and became her caretaker. They needed each other in a way, but it took a toll on Jacob. She developed dementia, which worsened and he found himself needing strategies to deal with his grandmother in her condition on top of his disorder. The fatigue from non-stop care and the heartbreak from watching her health deteriorate prompted Jacob to take up running.

Getting creative, he came up with ways to tire his grandmother out to allow a little time for himself. While she napped, he could run and get some alone time, clearing his head, taking in some fresh air and decompressing. As runners know, there’s no better stress relief than a good run. For over 2 years, he ran the same 10-mile segment of the Burnt Creek Trail in Vancouver. He got in shape, but more importantly, it trained his mind. His long runs would allow him to to focus on acceptance and moving forward. When I asked if he had a favorite mantra, he said it was the NIKE slogan, ‘Every Damn Mile’ for all those miles he logged in. None of them were given, each mile was earned and every mile  in return helped him maintain balance.

Marilyn dragged him out for some group runs and he ran, at times, with the Chuggers, a group of runners in Vancouver who like to run and chug beer. It was nice to have this new support group, plus his running habit even prompted some of his friends to give it a try. His family and friends had been extremely supportive of his disorder, but it still overwhelmed them at times. With the running community, he wasn’t labeled and could just go run without the baggage or added stress. His next progression, like many of us, was an event. He and a friend ran the Huckleberry Half Marathon and, despite the hills, Jacob said it’s been his favorite run. Not just because of the sweet preserves or the selfies with Mr. and Mrs. Sasquatch, but the friendly atmosphere. The event was small, keeping it a little more personable and partway through the race he and his friend were already discussing the next year instead of swearing to never run one again.

He followed that with the Bend Marathon in 2015, which turned out to be a bittersweet time in his life. Shortly after celebrating his 26.2 mile run, his grandmother passed away. His role shifted from caregiver to estate manager. He’s been at the coast, away from the ‘real world’ settling her estate and is anxious to have life get back to normal, whatever that is. Seeing some of his Chugger friends out running an event in Astoria only reminded him how excited he is to get back to his life. This next chapter in life will still include bipolar, but hopefully running and friends will help him cope.

Jacob volunteering at the Cosmo Run in Vancouver

Our running community is pretty amazing. I adore my fellow blogger, Joe, and knew that I’d admire Jacob simply based on his recommendation. Anyone Joe admires, I admire. I also love Marilyn and feel that anyone she considers a friend gets instant approval. It was such an honor to have Jacob share his journey, or at least his journey so far.  So many people suffer from bipolar and, for me, I think it’s so important to understand where they are coming from and educate ourselves. It’s another reminder for me that you have no idea what’s going on inside with people, regardless of the things they might say or do. Always, ALWAYS give people the benefit of the doubt and love and respect them regardless because everyone feels pain. I appreciate Jacob being brave enough to share his story, instead of hiding his bipolar. There is nothing to be ashamed of or embarrassed about with this disease, I wish more people would share their stories and experiences with it. I think it empowers people to come together and talk about it and I KNOW that running brings people together. Reach out to those around you, check in on people who might be struggling and live like Jacob. Every damn mile, just go out and get it done, clear your brain, focus your thoughts and decompress. He’s a young man I think many of us should emulate.