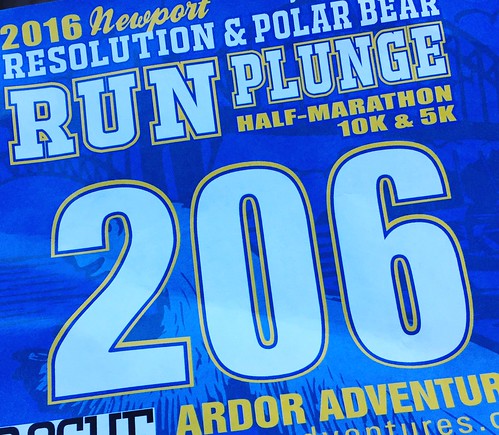 New Year's is my favorite holiday. I know that's odd, but the feeling of casting aside all the crap from the year prior and wiping the slate clean for the year ahead leaves me feeling invigorated and motivated. I don't really do "resolutions" as they are typically known - moreso just a renewed committment to being the best version of me I can be. Part of that is attempting to make no excuses - for my actions, for my words, for my shortcomings, and for my failures. It's a lot easier said than done. The 2016 Newport Resolution Run and Polar Plunge, put on by Ardor Adventures, was a challenge unlike any I have had in quite some time. My time was lackluster and I left the event featuring entirely humbled (in addition to dead tired). I could fall back on the following if I really wanted to (and maybe I am if I am even writing them here):

But I am not going to fall back on those – I’m going to own up and say that I am out of shape after the holidays and this race kicked my butt! The 10k started at 10am alongside 5k runners (half runners started at 9am), and there was an energy to the race. It was probably a combination of a local DJ and the need to stay warm that had everyone jumping and dancing.

We took off near the boat ramp on the backside of Rogue Brewery and headed on the paved trails down to South Jetty for an out-and-back. This section (as was the majority of the race), was relatively flat with only some slight climbs as we moved to the trails at the end of 26th Street. The flatness on the way back was made null by some nasty SW winds!

We passed back by Rogue, where 5k runners returned to the finish, and 10k runners headed south on Ferry Slip Road, past the Oregon Coast Aquarium, and east on 35th Street to the turnaround near Idaho Point. These roads were not closed to traffic, but the minimal road crossings were handled well by volunteers. The traffic was also pretty darn quiet the whole time as well, and even with a big lumbering stroller, I never felt worried running on the small shoulders.

There were some great views throughout the entirety of the race. The start, complete with the Yaquina Bay Bridge right in the background, was definitely photo worthy. The bridge also loomed large in the distance and gave a motivation on the final stretch back. Additionally, as we ran on South Jetty, we could see both Newport Lighthouses in the distance. It was a beautiful day for running AND sightseeing.

Following the race, runners had a private room within the Rogue Brewery, complete with a bowl of chowder and a cup of Brutal IPA. The chowder was incredible (though I was starving), as was the beer. The room was a little chilly, but I think that’s the set-up of the brewery itself.

While 2016 is the year of no excuses for me, it appears to be the same philosophy adopted by the Race Director. Within hours of the race ending, we received an email that outlined some race day issues that occurred (almost all out of his direct control) and a vow to learn from and make future events better. These included volunteer issues, such as weights not being brought to hold down the start/finish chute in the wind, a volunteer photographer not showing up (it was hovering at around 30 degrees and I’m sure many felt that staying tucked in would be much nicer). He also acknowledged the bigger issues as to timing not being done quickly (due to some timers not showing up), and the course being short by about a 1/2 mile due to miscommunication on where the point needed to be. All in all, it was a pleasure to see someone take responsibility for snafus. Personally, I was so tired during the race that it felt like I ran 8 miles, so the 1/2 mile issue was fine with me!

All-in-all, I felt it was a fantastic day, despite some race issues AND my relatively poor performance. It will serve as motivation for me and I know for the RD as well. Thank you Newport Resolution Run for providing a solid event on New Year’s weekend!