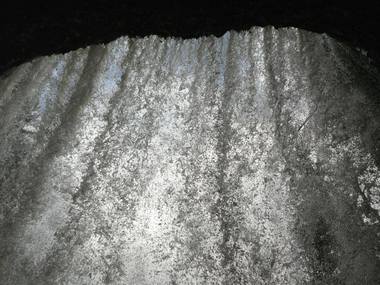 The reputation of Run Wild Adventures and the Silver Falls Marathon, Half, 50k, and 7-miler precedes itself. That's why all events were sold out in 2015, with the half filling up in seemingly mere minutes. The beauty of the area, the organization of the event, and the ability to run amongst (and behind) waterfalls is well-known and brought runners from over 30 states to Silver Creek Falls State Park. I could really spend about 4 paragraphs describing all the awesomeness that this race is, but most of that stuff can be found strewn across the internet. The experience of race weekend is well-documented and highlighted from Run Oregon and other publications as well. You can check out the race maps and elevation charts and the race pictures for reference and confirmation of the awesomeness. Shoot, just pull up the #silverfallsmarathon tag on Instagram and see the praise given and amazingly beautiful and motivating shots. But I wanted to try something a little different this year. On most occasions, me trying something new consists of going longer and further. This year however, I decided to do the opposite and try my hand at the 7-miler, which was only added to the lineup last year. And the best part was that I got to run it with my wife by my side the entire time - something that is EXTREMELY new in our relationship. And I couldn't have picked a better race and location. 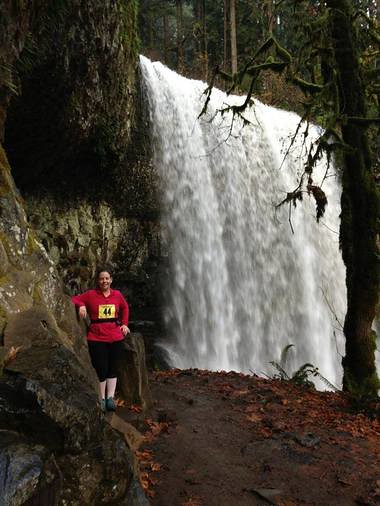 Reader Kristin Baldwin Bell has a picture of a lifetime.

My wife and I have been married for 7.5 years now, and with two little kiddos under our feet, we generally split up our workout times. I will run in the mornings before work or on my lunch break (with weekend races), and my wife will work out in the evenings or nighttime when I can take over parenting duties. On top of that, my wife isn’t really a runner by trade. More accurately, she hasn’t really had any desire to run until the past 6 months or so. We have actually participated in the Silverton Pajama Rama 5k, Monmouth Mini Marathon, and Detroit Lake Mud Run together, but never actually next to each other. In those previous instances, we split up the strollers or she ran with a friend while I kept my speed up. Those were all great and fun, but it was something completely different to run step by step (and hand in hand for picture stops) for a whole race.

The 7-miler is really the main portion and most scenic portion of the races. It is the meat of the Trail of Ten Falls and what enters most people’s minds when they think about this race. The race starts in the South Falls parking area and quickly leads onto the Rim Trail (near the 3.5 mile mark or so of the longer races). I have personally ran the half on three separate occasions and I generally describe the half as:

The 7-miler essentially cuts off the first bullet point and keeps the rest. As we headed out of the parking area, there was a short jaunt allowing for some thinning out before entering the trails. However, with hundreds of people participating, we still hit a bottleneck upon leaving the paved area. This led to a slow go for the first .5+ miles on the trail. While this is generally OK (considering there is a solid climb right off the bat), it does make speed a challenge to keep up. There are various areas to pass, but it’s not the easiest. If runners are concerned with their 7-mile times, I would recommend starting near the front and trying to put distance between yourself and the majority of the other runners right off the bat, or (since the race is chip timed), giving yourself some extra time and start 5-10 minutes after everyone has left.

My wife and I started in middle-back of the pack and had plans to just enjoy our time together. We got caught in the initial log jam, but it allowed us to kick back and actually have some conversation as we ran. We talked about my experiences with trail racing, about the beauty of the day, and even about our future plans to race together in 2016 (I think we settled on seeing if we could enter 12-18 races together – a lofty goal for sure). Despite the elevation changes, my wife held on strong and we were at North Falls before we knew it. As I mentioned earlier, we held hands for our photo-op just after North Falls, but were unfortunately accidentally photo-bombed by a racer ahead of us.

I was so proud of my wife throughout the entire event. While I was running at a slower pace than usual, it was SO worth it. I was inspired by her committment to push herself and by the toughness she displayed on something outside of her comfort zone. I think we can all get caught up in the bigger, longer, faster motivation that we as runners strive towards. But sometimes it’s taking a step back and challenging yourself by bringing someone into your own running world that is really rewarding. Would I have had a great time by running the half and my wife running the 7-miler? Sure. But the memories we create together are going to be much more meaningful than just adding to a half-marathon total.

I highly recommend the 7-mile distance of this race as a perfect opportunity to get others involved. This race is guaranteed to be amazing, rain or shine, and Run Wild Adventures always creates an amazing experience.

Race results can be found here.

If you are looking for the next winter trail race, consider checking out the Shellburg Falls Trail run in December, the Buck Mountain Mudslinger Trail run in March. Buck Mountain is actually ran some of the same trails as the Silver Falls Full Marathon (the extended section before heading down to the waterfalls).

2 Comments on Love from a Different Perspective: A Run Oregon recap of the 2015 Silver Falls 7-miler