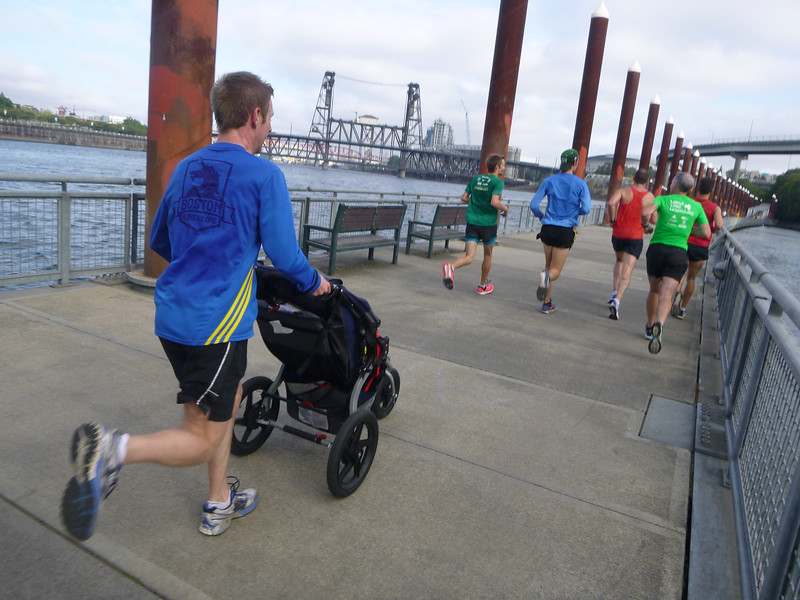 The Red Lizard Sunday long run - free, 12-ish miles, 8:30a from Starbucks at NW 23rd and Overton. Photo via redlizards.smugmug.com.

Because Coach Jim's runs don't start up again until November 7, this week, we'll share the 411 on some other great free runs hosted by Team Red Lizard. The Lizards' runs are free to attend and everyone is welcome. Paces tend to be on the faster side - 9:30/mile is usually the last group to finish; but if you are new one of the run veterans will stay with you to make sure you do not get left behind or lost. Paces vary from week to week. Their runs are offered on Tuesdays, Wednesdays, and Thursdays, with a long run most Sundays (except when there's a big race, usually).

Tuesdays are track workout nights, organized and coached by Rick Lovett. The warm-up starts at 6p and the workout at 6:15p at Duniway Track of SW Barbur Boulevard. The track is lit, and practices are held rain or shine. You will want to have a 5k time in mind, but only so Rick can tell you which pace you should be running. I love their track workouts because there is no “slow” – just the “right” pace. Even when I was the slowest person there, I was expected to take my place in Lane 1 and as faster runners passed me, they’d cheer me on. If you are not able to complete the entire workout with the group, just do a portion. (I called it “Half-Track” because that’s all I’d usually get done before cool-down.) Lovett is a knowledgeable and welcoming coach that would love to help you with speedwork.

Wednesdays are the Pub Run. If you’ve run with the Lizards on Wednesdays in the past, you might remember they used to meet at the Fulton Pub on SW Nebraska and SW Macadam; but they recently changed start locations to Buffalo Gap at 6835 SW Macadam Ave (just a few blocks south). The 6-mile run starts at 6p and you will need a headlamp and reflective vest. In the winter months, the route crosses the Sellwood Bridge and makes a nice loop through a beautiful neighborhood before returning to the pub. Many runners will stay afterwards for dinner or a beer. Don’t be shy – the Lizards love new friends.

Thursdays give you an unmatched opportunity to run some wicked hills. In the summer, they run on Wildwood up to Pittock; but in the winter months they climb to Council Crest. Again, you’ll want a headlamp and reflective vest. The run starts at 6p from SW 19th and Madison – a block off Jefferson behind the Goose Hollow Inn. Be ready for 6-8 miles of ups and downs, then stick around to celebrate your impressive feat with a pint.

Most Sundays, the Red Lizards also meet up for a long run. A great place to see who is planning to attend – and at what pace/mileage – is the Red Lizard message board. Generally, you can count on about 12 miles, starting at 8:30a from the Starbucks at NW 23rd and Overton; paces vary.