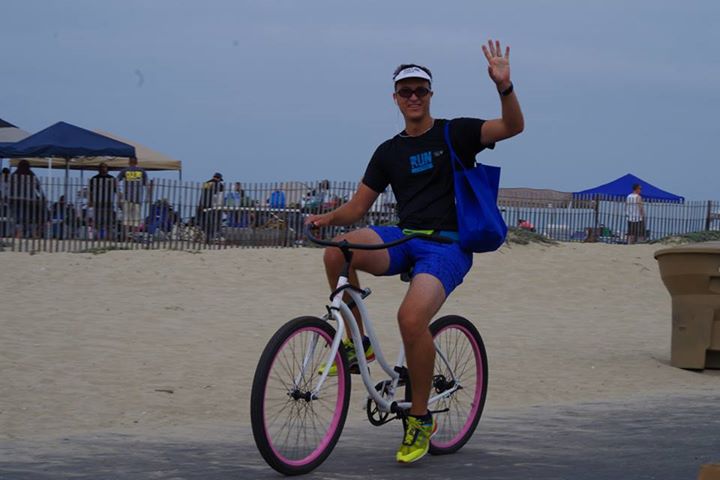 In late-August, I spent a glorious 3+ days on the warm and beautiful Huntington Beach in Southern California. My wife and I were without kids and we stayed at a boutique hotel, ate at local restaurants, and drank local beer. We went to Disneyland (again sans kids) and experienced Uber for the first time (come on Salem, get with the program). It was an amazing trip that I am sad am over. But even with all that going on, one of my favorite experiences (aside from spending time with my wife - alone), was the 2015 Rockin' Summer Half Marathon.

I previewed the event in early August and was excited to check things out in person. I was doubly pumped that now I could add California to my half marathon list (now at 5 behind Oregon, Washington, Utah, and Arizona).

In case you didn’t realize, California is big. While the race was in Huntington Beach, it was actually a bit of a trek from my hotel. I had initially planned on walking/warming up to the start, but am super glad I decided to borrow a hotel bike at the last-minute. Turns out I had only briefly glanced at the starting location and mixed up the start location and turnaround location in my head. As a result, the start was about 6 miles from the hotel – which would have been quite the warm up if I didn’t have my two-wheeler.

In my preview I stated that:

A Better World Running has a low-key feature to it, which probably fits in well to the local atmosphere.

I guess that quote was generally true – it was low-key. However, that did NOT mean that it wasn’t organized and structured. The start may have been race flags and chalk, but the check in table was a breeze, there were tons of pre-race items for fueling, and instructions on the race were given with humor and organization.

The entirety of the race occurred on the Huntington Beach Bike Trail that ran near the sand and a few hundred feet from the Pacific Ocean. It was impossible to get lost,even being an out of towner, as the course was a variety of out-and-back loops depending on the distance chosen. So my half would be 2 out-and-backs with views of the ocean and warm beach sand – not too bad.

We started at Sunset Beach and headed south through Sunset County Beach before meeting up and running the entirety of Bolsa Chica Park before turning around. 131 runners took the long, flat path ready to take on the distance of their choice. Despite it being California, the morning felt almost like I was back in Oregon. The skies were overcast and there was a bit of a breeze. The temperature hovered around 70 early on, which was a welcome reprieve from the 90 degrees that most mid-days were nearing. I was happy with the early starting time (which I am assuming is a necessity).

Over the course of my first out-and-back, it was really easy to get lost in the landscape. On one side of the path were numerous parking lots and RV’s. While that’s not generally a great landscape, I actually thought it was pretty neat to see the lot getting fuller with each minute and seeing kid’s joyously sprinting into the sand with their shovels and pails. Men and women, young and old, were changing into wetsuits and carrying surfboards to the water beyond. RV’s in the beach state parks were grilling up breakfast – a little bit of a different backdrop than us Oregonians are used to camping in.

The second race director was blaring music (Eye of the Tiger on repeat, I’m fairly certain) at the aid station near mile 2.5. This was a great spot for it, as it preceded the only real elevation gain on the course, a short yet consistent hill up to the turnaround at the crest. My time over the first 3.3 miles was not fast, but at a fairly decent clip all things considered. The short decline following the turnaround, a pit-stop at the aid station (Eye of the Tiger again), and a different view of the Pacific on my left kept me pushing along. As I neared the start and hit the turnaround for lap 2, things started to change a bit.

While the weather wasn’t “hot” by normal senses, it became more and more muggy as the minutes went on. My flight from the day before, as well as my bike trek to the start (on a small, pink, one-speed, land cruiser no less) combined to create some heavy legs near the 10k distance. Following my turnaround I considered dropping down and just calling it good, as the RD’s state that any point, a runner can drop down to a lesser distance without penalty and your time will be accommodated.

But I pulled through. I was slow dangit, but I persevered. That aid station felt a million miles away. That hill felt like climbing Terwilliger. And my last 2 miles felt like I was walking. But even then, I made it and added to my half marathon repertoire.

The post-race swag bag was surprisingly swag-heavy with beverages, snacks, deodorant, and coupons.

Keep “A Better World Running” race company bookmarked, as they hold 16 races (many times two each weekend) from August through December. Their races are very reasonably priced and take place up and down the Southern Californian coast. There are group discounts if you are in town for work or family gatherings, and if you happen to head down there a lot, each 5th race is free. Strollers are allowed in all their races, so there is really no excuse to pass them up.