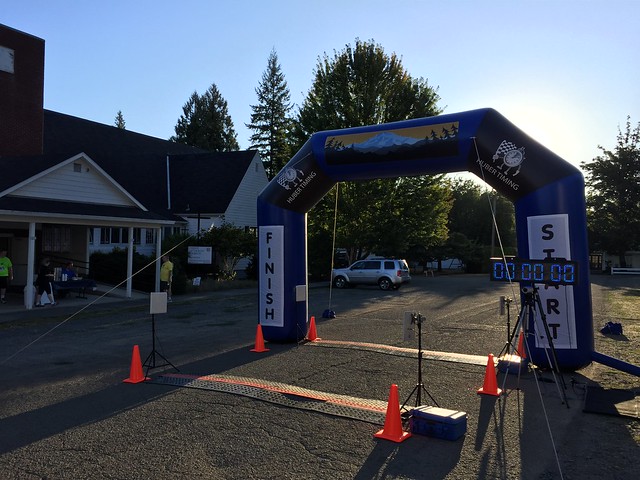 I Love Aurora. These words are written in red across a white cotton t-shirt that I received at the inaugural Aurora Colony Days 5k back in 2012. The shirt was not part of the race package, and the gesture unexpected and more than generous, but I suppose I shouldn't have expected anything less than good old small-town hospitality. I actually still have that shirt, and the 4th running of the event just finished up today- Saturday, August 8. The race was very simple, well-organized and put-together, and catered to all different racing abilities.

Huber Timing was on hand to do the timing for the 70+ of us who woke up early for the 730am start. The course has remained the same since 2012, and while I am generally not too fond of consecutive loops, I found that I did not mind it at all. These loops allowed for significant straight stretches down quiet (and beautiful) neighborhood streets. I actually ran in the middle of the roads for the entire 20+ minutes and never saw a car. I really enjoyed being able to hit my stride and zone out while running from point A to point B. The loop was long and the roads were wide enough that I did not run into any concerns with quicker runners getting stuck or boxed in behind walkers.

There was a minor hill right at the start and near mile 1.25 (and again near mile 2.25 on the second loop), but the great majority of the race was flat and prime for PR’s. In fact, I ran my fastest 5k this year (and beat my 5k from Thursday eventing by almost 100 seconds). While some of this is due to my recently increased fitness, I attribute a lot was the course itself.

The course was very simple and straightforward, but was very clearly marked by chalk, signs, and volunteers in strategic positions. Even though I remembered the race from a few years back, when the race director described the course just prior to starting as “turn left and follow the chalk and signs”, I felt a little concerned. Run Oregon has recently experienced a few signage and volunteer issues recently, and I hoped that it wouldn’t be an issue. And it definitely wasn’t. It would have been impossible to have gotten off course. Good work there!

I would recommend this race to anyone looking to reach that elusive record, as well as to everyone looking for a great small-town race in a great town. There is so much to do afterwards at the Aurora Colony Days, it seems impossible to not stick around. By 830am, the streets were already lined with antiques and the fair vibe was in full effect.

Overall, 76 happy runners were on hand to enjoy this event. View the full results here.