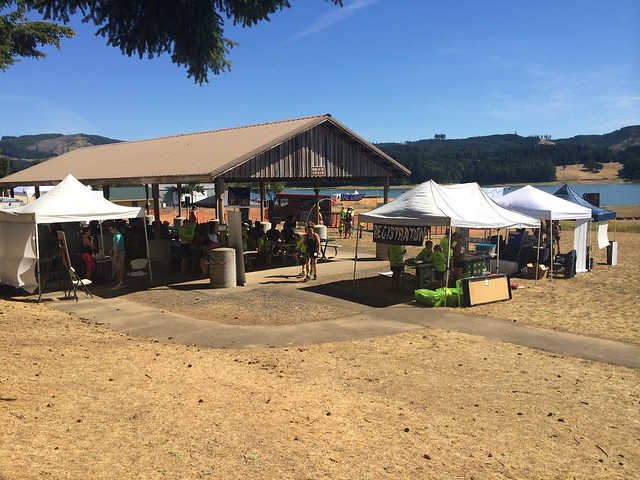 This past Saturday (August 1) Epic Grind held its annual 5 & 10k events at Henry Hagg Lake. After a short drive up the street we arrived, picked up our race packets without any issues, and assembled at the starting line. The sun was shining, we were pumped up, and ready to get dirty! Full disclosure here: I tried to talk myself out of the Epic Grind this year.  I had been travelling the entire week before and my body was worn down with exhaustion.   But I toughed it up and made it - and was happy that I did.

If you don’t already know, The Epic Grind is organized and coordinated by Blue Monster Events, a family owned Oregon based adventure race and events company. Surprisingly the race was much smaller than I had expected and there were around 20 people or so in my heat. I prefer smaller races and really enjoy the intimacy so I definitely appreciated this.From the moment we started out until the very end I burned through every obstacle and raced those trails like I had no idea I could.  It was an incredible feeling to be running through those woods and successfully completing obstacles like the Tall Enough net of rope, ten feet up and ten feet down.

The obstacles were original and so much fun! The names were puns and had us laughing every time we approached one. They were unlike any I’ve ever done before and especially made to be reusable which I really appreciate. They were spread out a good distance between one and another and there were also some “manmade” obstacles that had us consistently jumping over fallen trees. Along the 5k course I tried to keep count of the them, but was having such a good time I lost track. In the middle of the race, there was a section which provided a solid amount of time navigating the trails. This section was very peaceful (despite the exhaustion creeping over my body), but was a nice shady reprieve from the obstacles ahead and behind us. One of my favorites was the Don’t Be a Slacker. There were two ropes tied between trees about 7 feet up and we had to side step across one rope while holding onto the other one above our heads. I’m confident I looked ridiculous. Another one was Tug Boat, a water obstacle where we hopped in inflatable rafts and had to pull ourselves across the lake by rope. Big Colored Balls was exactly how it sounded, and got me muddy on an otherwise mostly non-muddy course. It was so fun and definitely an original. One of the last obstacles was one that I was a little terrified of when reading about the event – the Walk on Water. In this one, there were rows of inner tubes connected and lined up from one area of the lake going to another. You had to make your way across without falling – or so was the intent. I ended up slipping through more times than I care to admit. We never knew what was around the corner and each time we came into a new area, someone around me how commented how stunning the course was (interspersed with laughs of enjoyment at how tired we felt and how ridiculous we probably looked). CLICK HERE for a complete gallery of their obstacles.

The course was amazing, and staffed with friendly volunteers to direct me where to go next as well as arrows and caution tape keeping me on course.  There was never a moment I was worried about being on the right track.  I learned a long time ago, watch where you are going, but keep an eye on where you need to be.  It’s a metaphor for life, really.

Upon finishing we were congratulated, had our names, & finishing time read over the loudspeaker. HUB (mmmmmm) was handing out beers in our newly received logo pint glasses. I don’t typically participate in as many obstacle course runs as I once did, but Epic Grind was local and original. You can’t go wrong when looking to add an obstacle course run into your summer race calendar.