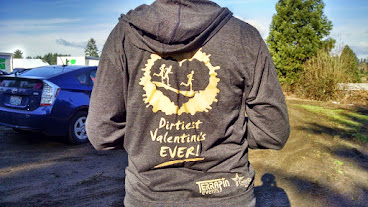 Valentine's morning started out with 4 of us leaving our Valentines for part of the day as we headed out for our first My Muddy Valentine race.  We arrived at Lee Farms to find the venue fogged in. We pulled in to park and Doug, our team "patriarch," rolled down the window and the enthusiastic volunteer greeted him with, "How's your love life?" Soon followed by, "So are you looking for love today?" She kept the Valentine's theme going with many entertaining questions and quips before checking us in to park.  It was a great start to the fun event.  We layered up a bit and headed out into the cold fog to check in. Packet pick-up was quick and easy and we got a great zip-up hoodie instead of the usual race t-shirt. There were also plenty of port-a-potties, which meant no lines!  It was a well-organized and smooth start to the event.

As this race was a wave start, we began to see runners returning from their adventures. Some were barely muddy, while others were covered head to toe.  It was hard to tell what we’d encounter along the way.

It was soon time to line up for our 10:20 wave and it seemed that the fog was finally starting to burn off.  Our wave was fairly small, with maybe 20+ people, which was great!  It kept things from getting too crowded and backed up. We headed off through Lee Farms soon hitting the first slippery section of trail.  I slowed down to keep myself upright and made it through without incident. We wound through trails of varying degrees of dry and slightly muddy. The sun soon broke through and I was wishing I could remove a layer, but since I had my race number attached to my long sleeve shirt, I kept it on.  As we ran around the farm I kept wondering when we’d get to an obstacle. We finally came to a pit which had some walls to go over and under and then we were back on the trails.  The obstacles were spread out and there weren’t as many as I had hoped for, but they were still fun. Some of the obstacles included: climbing up and over hay bale pyramids, a teeter totter, tires, slant boards, a slanted wall, a slide – which was the cause of the majority of my mud, and a rope climb out of a pit.  The obstacles were fairly easy and designed for all ability levels. The volunteers at each obstacle were friendly, helpful, and seemed to be enjoying the morning.

Do these pants make my butt look muddy?

In my opinion, the toughest obstacles were the deep muddy sections.  There was a reason they called one of them the “shoe snatcher.” I barely kept my shoe on as I slogged my way through. Some people had opted to crawl, while others seemed hopelessly trapped in thigh deep mud, and still others were thoroughly enjoying the mud and made sure they got every inch of themselves covered.  I managed to only go shin deep and made my way out upright and with both my shoes still on my feet. Success!

It wasn’t long until we reached the finish, in fact, I don’t think the route was a true 5K, but that didn’t matter.  We were just there to have fun and support a great cause (Molly’s Fund, fighting Lupus.) Afterwards there was beer and mimosas and several fire pits to dry off around. Apparently, there was speed dating available, but since my teammates and I are all happily married (to others!) we skipped out on that one.  Although, we were all wishing we could get a front row seat to that part of the day.

My team and I had a great time at My Muddy Valentine.  We truly lucked out with a beautiful February day for this event.  If you’ve been wanting to try a mud run, this is a great first-timer’s event; very casual, positive, not over-crowded, and lots of fun!

We hung out for a while in the sunshine sharing stories and people watching and then made our way back to our vehicle for our tried and true method of post mud event clean-up – gallon jugs of water. Yea, it’s a bit cold, but it works pretty well for quick clean up. With the clean up and some quick changes we all loaded our muddy gear into plastic bags and headed out for the traditional best part of every race.  Lunch!