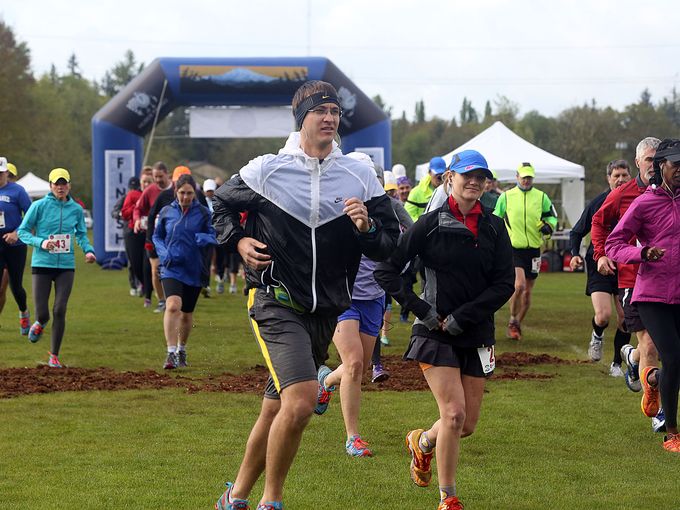 I was looking fast at periods today (granted that it was taken about 6 seconds from the start of the race)
Photo: KOBBI R. BLAIR | Statesman Journal

It's pretty fitting that a race put on by a soccer club (Cascade Futbol Club) would feature a back-and-forth affair in regards to the weather. But in the end, I managed to come out on the winning side - but just barely. The day began with threatening clouds that eventually gave way to a major downpour in the hour leading up the race. I ended up spending the 45 minutes leading up the rain staying warm and savoring my last little bit of dryness. But then a funny thing happened.

The start and finish line on the soggy pitch.

As I got out of my car to trudge through some stretching, the skies opened up and the sun shone through. This continued right through the start of the race, something that brightened up even the darkest feelings.

The first 2 miles of the race (and subsequently, the last 2) were some of the most challenging terrain to run on. This is not due to elevation, but actually due to the terrain itself. The first minute or so was slogging through the grass soccer fields which was a wet quagmire afer all the rain. This was followed by a stretch of loose gravel, which made each step feel like you were sinking and taking a half-step backwards. We then curled on to a straight stretch of rocky trail. There were a few “worn” tracks, but the larger rocks, combined with puddles and a little bit of mud, made things tougher than it should have been.

Once we hit the pavement, things smoothed out for a bit. It was nice to be on solid ground again – albeit with wet socks and shoes. I was starting to regret running in my lightweight running rain jacket, due to the mugginess that came from a morning of rain. As we started heading east, we hit the longest stretch of uphills. From mile 2.5 through about mile 6, the gradual climbing continued. I started up a conversation with a young kid who was running in his first half marathon and was looking to break 1:40:00. With his pace and strong physique, there was no doubt in my mind he was going to reach his goal (note: he did).

The gathering area pre- and post-race.

The halfway point of the race brought the end of the elevation gain, but unfortunately brought back the rain. And not just a little rain. It was a whole pelting, instantaneously soaking, road-flooding downpour. We were running North on Howell Prairie Road and the rain was coming down sideways (literally) from the West. Big drops slammed into the left side of my face and soaked me to the core, even with a rain jacket on. The worst part?  I knew that it was only a matter of time before we had to start heading back West – and headfirst into the monsoon.

Then as soon as the rain started, it was gone again – and just in time. That didn’t mean that the wind let up though, and my cold, wet, body pushed onward through steady gusts. Between miles 8-11, I managed to get passed by two people who had some energy in their reserve tanks that I just didn’t have. The final two miles were back on the rocky trail, loose gravel (even more difficult), and the finale on the soccer pitch (even more wet). I was very pumped to have finished up in one (exhausted) piece. I even ended up winning my age division and receiving a small trophy – something I have only once accomplished before (let’s just pretend I wasn’t the only one in my age group please).

I am typically not very hungry after I race, but for some reason I felt famished. The post-race spread was solid, with the standard fare of bagels, bananas, hard-boiled eggs, coffee, and a ridiculously delicious fruit filled pastry. I may dream of that pastry tonight…

The only grumbling I overheard was a relatively big one. Apparently, a few of the volunteers (soccer club members, I think) left their post and some runners ended up going the wrong way for a while. I did not witness this firsthand, and in talking to fellow Run Oregon blogger, Marilyn, neither did she. I could be wrong, but I am guessing it may have been for those at the very front of the pack, which would be a bummer. However, I do know that the race director took this seriously and was none-too-pleased. Rumor has it that these individuals were heartily lectured as a result. I chalk it up to a curse of  inaugural race problems, coupled with volunteers who have likely not been a part of a race before. I have no doubts this will be fixed and will not be an issue in future years.

Smaller inaugural races are always difficult to gauge. I go into them knowing that things are not going to be perfect. There are always things that pop up that weren’t thought of, and I don’t expect smoothness. I may be overly forgiving that way, but I just know how much there is to know about putting on a race that is not always able to be known, especially by those who are not seasoned race directors. I typically judge my inaugural races on:

Were there things that can be worked on? No doubt. Some terrain was really tough, some road sections were a tad scary with fast cars and corners, and some volunteers learned the hard way why it’s important to stay focused.  But the right attitude and hard work was felt throughout the day – and that bodes well for changes and success going forward. Salem needs to have a half marathon – so I have high hopes!