I love beer. After now having visited over 560 different breweries, it’s fair to say I have sampled a lot of beer (follow me on Untappd). From post-race pints and run club meeting locations, to beer miles and relays, running and the kegged nectar seem to go hand-in-hand in Oregon. Our Kegs and Legs feature is where beer drinking runners like me can go to find some new favorite beverages.

In addition to tackling the local beer and wine scene, we also love to check out and feature some local distilleries. There are a surprising amount being created here in Oregon, and our latest feature is from Headwind Vodka in Portland!

I will be the first to admit that my first love is beer, as evidenced by the sheer number of unique breweries I have been to. Over the past year or so we have also become members at a few local Mid-Valley wineries. I appreciate spirits, but it wasn’t until I stopped in at a “craft” distiller a few years ago that I really started to understand that vodka, rum, and gin don’t actually have to be followed by “cran”, “coke”, and “tonic” – there are actually unique and, frankly, PNW ways to make great spirits.

Portland, and Oregon’s distillery scene has been growing over the past few years, and Headwind Vodka is showing that it stacks up. They won gold at the 2020 San Francisco World Spirits Competition, and were just one of seven Oregon distilleries to receive a medal (and only gold medal winner). 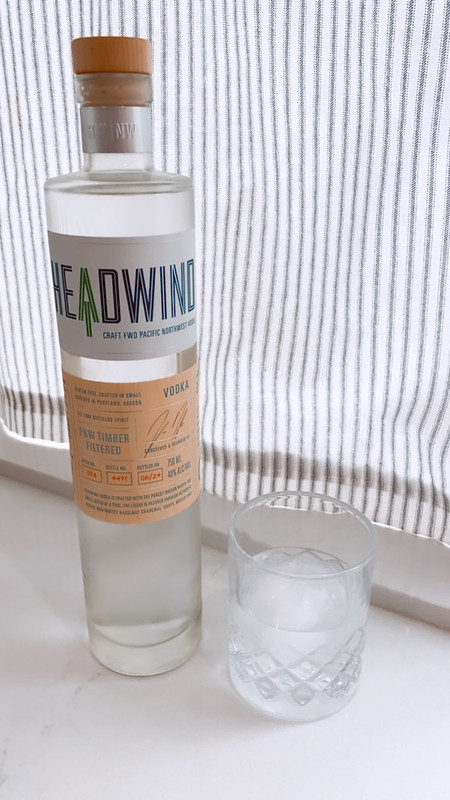 I’ll be the first to admit I don’t fully understand the distilling process, so instead of stumbling my way through it, I will let Headwind explain:

Headwind Vodka is a PNW-inspired and Portland-made vodka that is distilled and filtered six times, with the last filtration going through Pacific Northwest timber. The resulting spirit is crisp, clean, and free of the burn that is often associated with vodka. The grains and textures vary from bottle to bootle making each one as uniques and varied as the landscape of the Pacific Northwest.

I can attest that this is a very smooth vodka and easy to drink alone or even sip over ice if that is your thing.

I really appreciate just how Craft FWD (as they have coined themselves) Headwind is. I know myself, and other PNW runners, like to support the little, local guys, and this is definitely a business to support. The bottle is wrapped in actual wood, and has the unique batch and bottle numbers listed, as well as the date of bottling. So cool.

From the sleek look of the bottle, to the taste of what’s inside, I recommend supporting local while you are (once again) holed up inside – as well as when all this craziness is over!