It was a cool and cloudy morning with the threat of rain starting soon, when nearly 1,000 runners gathered at Portland Running Company for this year’s running of the Beaverton Half Marathon, 10k, and 5k. There was plenty of parking available in the surrounding business park, and packet pickup inside the store went smoothly and quickly. As I was walking along the sidewalk, an early-start half marathon walker was trying to make her way through the crowds, and while she was doing well, it didn’t appear that the course monitors were quite aware of the early starters yet.

I had time to browse some of the vendor tents and stop back by the car to drop off the goodies and double check if I was wearing the right clothes for the weather. I stood in line for the bathroom for a while (there seemed to be a low number of bathrooms for the number of participants), and it started to sprinkle as people started lining up in the start area. After a short warmup and stretch, the Anthem was sung, and at 8am runners and walkers for all three distances were sent off on their race. The rain had picked up, and the streets were wet, but that didn’t seem to dampen spirits. 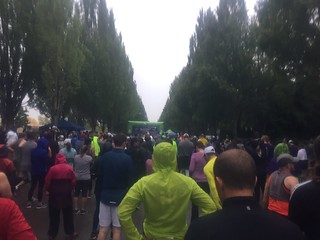 The course for the 5k was the same as the PRC Winter Series, which I had participated in a few years ago, and I was looking forward to seeing the scenery with more leaves on trees and less snow and ice on the ground. While the 5k followed an out-and-back course, the 10k and half marathon used a looped course, which joined the 5k again on the last mile or so. RunOregon’s Brian ran the half marathon, so look for his recap as well!

The first half mile of the race offered a wide street through a business park, allowing the field to stretch out without feeling crowded. At the half mile mark, the half and 10k turned right, while the 5k turned left down the hill towards Fanno Creek Trail. Just before I reached mile 1, the lead runner was coming back the opposite way. The trail through the park was beautiful and not too many puddles had formed yet. Volunteers were positioned at every important corner, many cones and signs made sure that we knew the right way to go. A water station was set up just before the turnaround point, making it possible to stop twice without having to slow down too much.

During the second half of an out-and-back run I always make an effort to encourage and acknowledge the back of the pack runners and walkers. I’m not a fast runner myself (solidly middle-of-the-pack for most events), and I admire everybody’s effort to try their best, whether it results in a 16 minute 5k finish or a 16 min mile pace. The rain was a steady drizzle (which actually felt quite nice while running), as I readied myself for the uphill during the last mile. I was just about to consider a walking break, when a woman who was walking with her 8year-old son told him “why don’t you run up the hill with her!” So the lovely boy and I encouraged each other up the hill and towards the finish line, where we received our finishers’ medal. 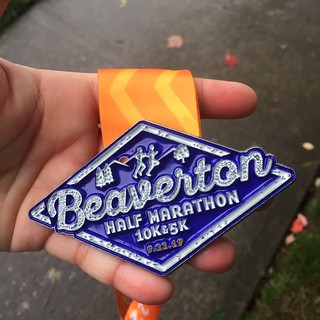 I grabbed some water and gatorade from the water table and took the short walk to the parking lot where the finish celebration was taking place. I greatly enjoyed the coffee, Jersey Mike’s sandwiches, oranges and bananas, and drinks by Rogue Brewing. (Their root beer is fantastic!) The rain was picking up, and despite the popup tents offering shelter, I decided to make my way back home again for a warm shower and dry clothes.

Overall a very nicely planned event that I would definitely recommend to anybody looking for a September race. Full results for the race can be found here.