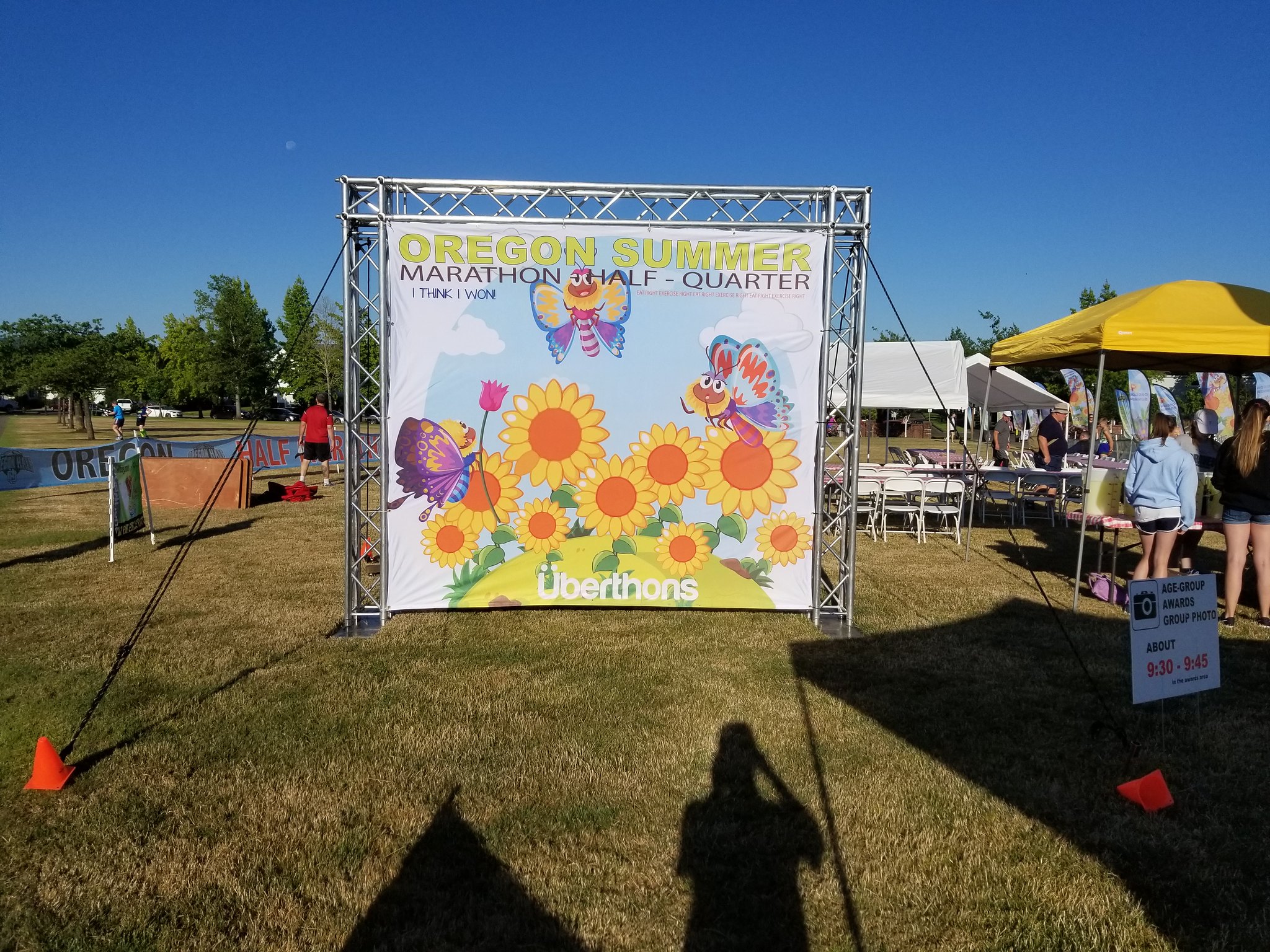 July is the month for Uberthons’ big summer event in Vernonia/Banks, where it staged its very first full marathon several years ago. As in recent years, this was a big event with distance options of full, half, and quarter marathon. The half was the popular kid at the party, just shy of 300 finishers, while the full had over a hundred, and the quarter was the dorky kid in the corner with just over 80.

Naturally, I ran the quarter marathon.

The full and half marathoners had an earlier start to accommodate the longer distance and the need to transport them from the finish area to their respective starting points. The quarter marathon, being an out-and-back route, allowed a later arrival time — about 7:45 am in my case. There was still plenty of close parking available in the Banks Elementary School lot, which was only a 1/4 mile away from the start line. I think the full and half marathoners chose to park in the middle school or high school lots, which were close to the bus loading area. No complaints from me!

We started on time in a single wave. The Summer Quarter Marathon course is logistically well-planned, starting at the center of Greenville City Park and then heading west for a short stretch to NW Main Street. Then it’s a tour of downtown Banks until the 1-mile mark right around the trailhead for the Banks-Vernonia Trail. As usual for Uberthons, there were race volunteers at the critical turns to direct runners and to stop traffic where necessary.

The trail was paved and wide enough for two or three runners to run abreast, although by then, I was running alone. The lead group of runners was far ahead of me and out of sight. At one point I did see a couple of runners ahead of me that I was slowly catching up to, but they turned out not to be part of the race.

About 2 miles in, I saw a runner heading back. I remember being passed by him earlier, but I didn’t think he was running that much faster than I was. To be heading back already meant he was about 2.5 miles ahead of me. I soon discovered what was going on. Somewhere around the 2.5 mile mark, I met a race volunteer who told me, “This is the turnaround point!”

Ah, I would’ve liked that to have been true, but I knew it wasn’t. “No, it’s only two and a half miles to here,” I shouted as I kept going.

As I got closer to the true turnaround point at 3.27 miles, I encountered two male and two female runners heading back already. Ah, they must have reached the 2.5 mile point before getting any mistaken directions. This also let me know that I was in 5th or 6th place, depending on what would happen with the guy who got misdirected.

I got to the turnaround point. There was a marker there but no race volunteer (yet — she was the one back at the 2.5 mile mark).

It was noticeably warmer during the unshaded portions on the way back. At least there were two aid stations (one of which had iced towels, even), which would be even handier for the half and full marathoners coming through later in the morning. (Except for Samuel Collins, the half marathon winner, who blazed past me somewhere around my mile 4 and therefore got to those aid stations before I did…)

Banks may be a small town, but that last stretch of the course through downtown is actually a mile long when you include the part getting to the park. You feel like it’s just another block before the last turn … but no, not yet.

But when you turn that corner for the last straightaway to the finish line, it’s so glorious. 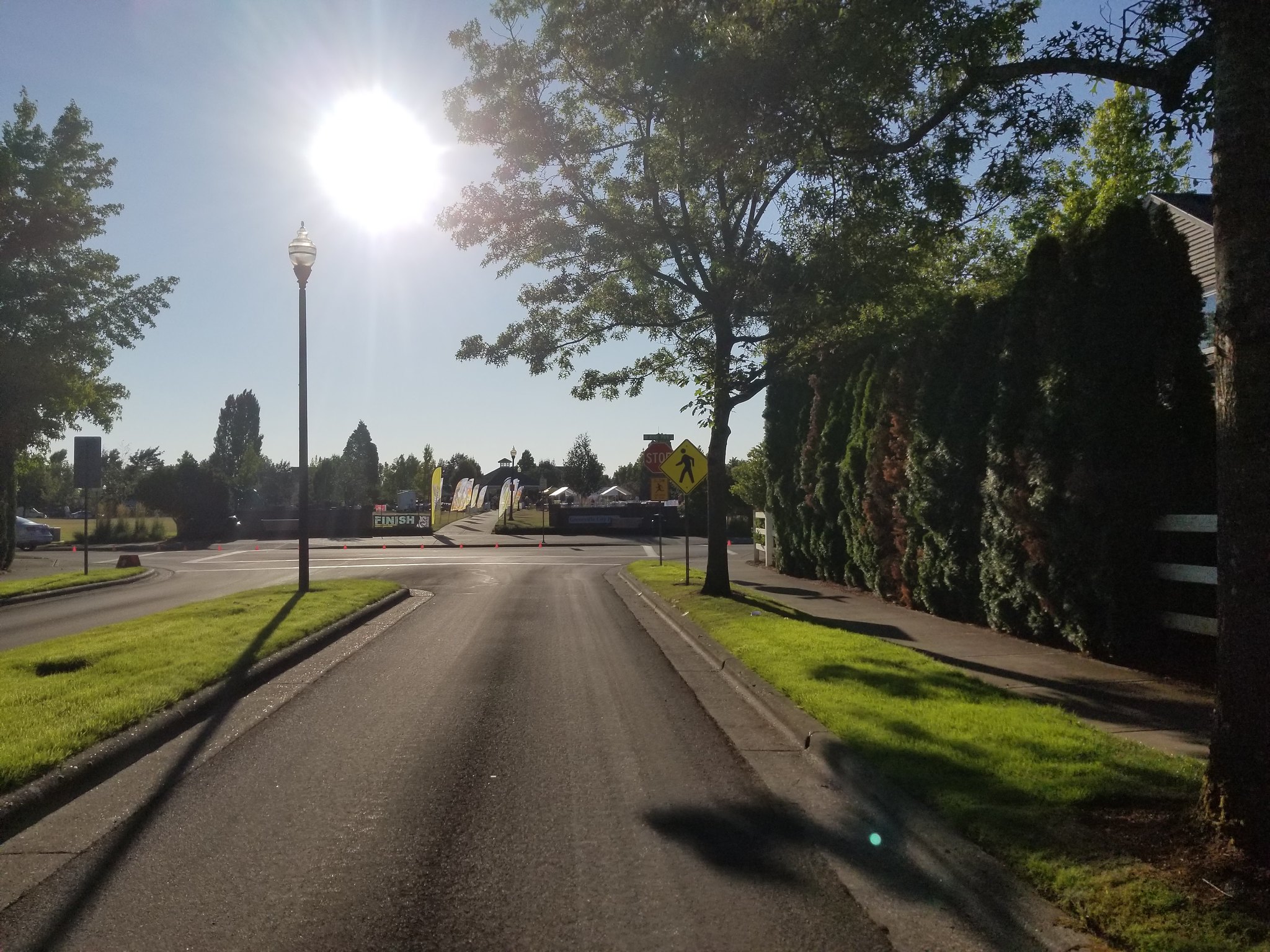 I actually took this picture before the start of the race as I walked from the parking area, so the sun was higher in the sky when I was finishing the race. 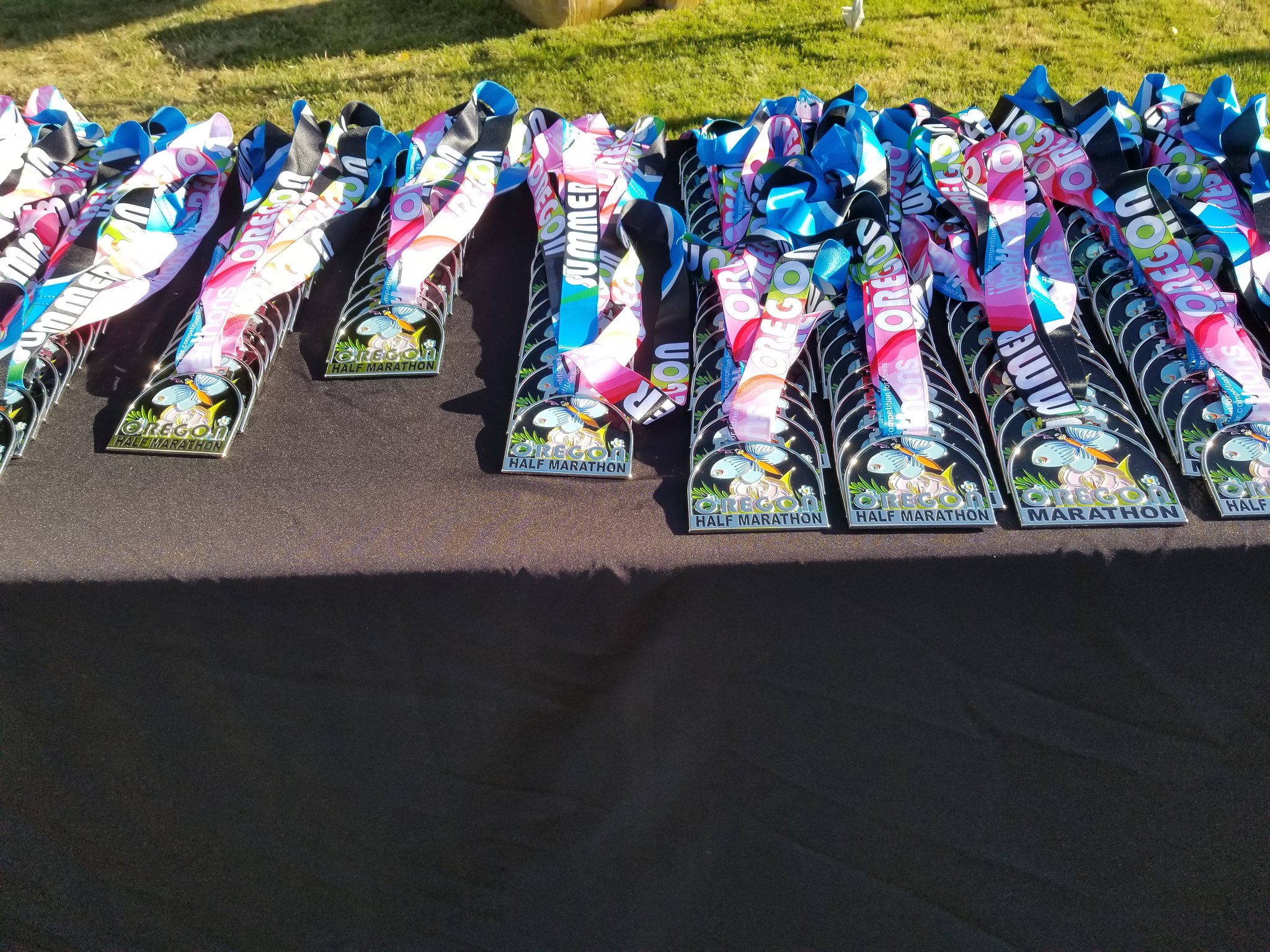 The post-race atmosphere was typically lively. More and more quarter marathoners and even some half marathoners continued to cross the finish line. The burger and hot dog bar was open already, so I headed over. This year the options were beef burger, chicken patty, hot dog, or veggie patty, plus macaroni salad and fruit. If it weren’t only 9 in the morning, I might have opted for a burger and a chicken sandwich (as we were permitted multiple items).

(By the way, the guy who got misdirected figured out that he’d run less than a quarter marathon upon reaching the finish line, told the race timers, and went back to run the additional distance.)

Uberthons offers a high degree of consistency and reliability in its races, so the difference between this event and the other seasonal ones lies mostly in the location. Heirloom Roses (frequently the site of the spring event) and Mount Angel (the fall event) offer rural settings with flat, pastoral vistas, while The Reserve (the winter event) is a golf course, and Banks/Vernonia (this event) and Champoeg Park (the spring event going forward?) are paved trail runs. Location aside, this was another well-executed race with lots of race support, big finisher’s medals, and satisfying post-race food.

The next Uberthons event is the Fall Half/Quarter Marathon/5K in Mount Angel.