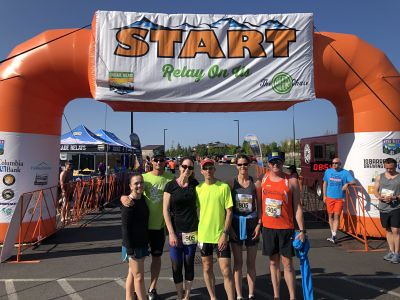 Let’s face it, one-day relays are fun. You get a team of 3-6 runners together, spend half the day running, drinking beer, and laughing, then go out afterwards to keep the fun going! The Bend Beer Chase is one such one-day relay that keeps it short (55 miles) and keeps it real. The neat thing about the Beer Chase series is that at each exchange, there is a local brewery that sponsors that leg. So they roll out a few sample brews and some goodies for runners to try out as they come in. The Bend Beer Chase starts at a brewery/restaurant in Bend, runs north to Redmond, then returns south to Bend, where the beer is in plentiful supply.

Now in its 6th year, the Bend Beer Chase has become a staple event for the area. The race is well attended and executed flawlessly by the Cascade Lakes crew. I have been fortunate enough to run every one since the beginning and have seen all the course changes, brewery additions and subtractions, and crazy teams that show up from all over the place. This year was my second in a row being the captain, which has really been a blast. Scott and his Cascade Lakes people continue to get better and better and this race was no exception. Course markings were perfect and the volunteers were simply awesome. Larger events like this can be a logistical nightmare and yet you might not realize it based on how well things went. 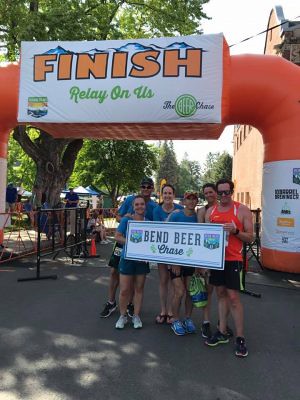 For this race, I conned my wife into running it with me, along with 2 other couples, including my friend’s wife who had never done a running event before. As we assembled that morning, there was definitely a bit of anxiety in the air but there certainly didn’t need to be. My group ran their hearts out on a fairly warm, 90 degree day, and placed 17th overall out of 154 teams! And the best part was how much fun we all had. We met some amazing runners along the way, from all over the west coast, who were all just having a great time. In the end, we all walked away with a sweet medal (that doubles as a coaster) and some awesome memories. Make a point of looking into this one next year if you haven’t done it. Or consider one of the other Beer Chases in Boulder, Colorado or San Diego, California!