“How about we don’t assign legs, instead, we draw names before each leg to see who will run; and how about we buddy up on each of them so no one runs alone (as in, we’d each run 2 legs)?” 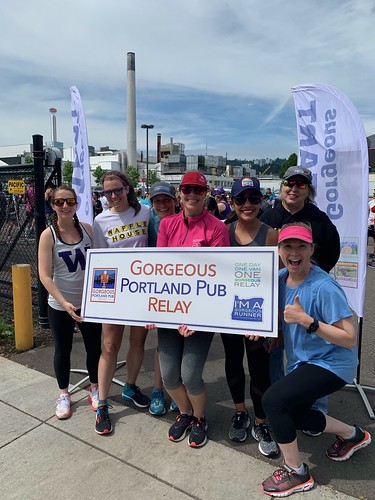 The Run Oregon team (left to right): Reilly, Naomi, Nikki, Kelly, Lisette, volunteer Pat, and Robyn at the start of the relay at Vagabond Brewing.

That’s how we started our morning on Saturday, May 18 on the way to the Portland Gorgeous Pub Relay. Well, our morning really when we were less than a mile from Vagabond Brewing and we realized we still needed to pick up our 6th team member, Nikki, who had led her Portland Fit training group out of Portland Running Company’s Grand Ave. store that morning – but we remembered just before heading over the Ross Island Bridge.

Fortunately, everyone on our team was up for the crazy idea to determine leg order by random draw prior to each leg, and everyone was also more than happy to run two legs so we’d always have someone to run with.

My team was made up of 6 people I knew, only a few of whom knew anyone other than me from the team. In addition to Nikki and myself, Run Oregon blogger Robyn Evans was on the team, two women I met from the Badass Lady Gang, and one friend-of-a-friend that I’d randomly run into the weekend before at a Oregon Brewery Series Run. My mom was our team volunteer, and luckily all these awesome ladies clicked immediately and we proceeded to run the most fun, laid-back and supportive relay I think I’ve ever run.

We started at 11:40, so after a quick bathroom break, the distribution of shirts, and a thick layer of sunscreen, we all put our IDs into a hat and drew to see who would run first. Mine was the first ID out of the hat, followed by fellow native Iowan, Reilly. We set out on our 5-ish mile run south on the Springwater, over the Sellwood, up the trail on the west side and through Willamette Park to the Fulton Pub. On the way, we made friends with a runner from the “Red Dress” team (hi Zach!) and saw a deer. Reaching the checkpoint, we realized we had no idea to whom we were “handing off,” so it was the opposite of a smooth handoff as we all celebrated together and then Nikki and Robyn took off towards the Rogue Eastside Pub and Pilot Brewery in close-in SE PDX. There, they handed off to Naomi and Lisette. 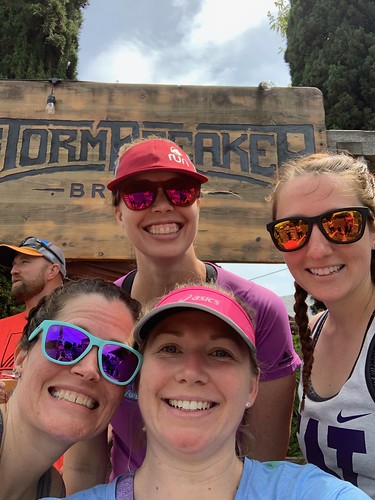 While Lisette and Naomi were running, we were having fun at Stormbreaker Brewing. This is Kelly and Reilly in the back and Nikki and Robyn in the front.

The rest of us hung out at the Fulton Pub for a little bit, and I had a taster of my favorite McMennamin’s brew, the Ruby. While I was enjoying my mini beer, Reilly and Naomi realized they lived directly across the street from each other, proving that Portland is, indeed, a small town.

The next exchange was at Stormbreaker Brewing on N. Beech (in the Mississippi District). Before drawing the next IDs for leg 4, we debated just running the same order, but decided to mix things up a little so people could run with different teammates; Robyn and Reilly were the lucky winners and got to run from Stormbreaker to Sasquatch Brewing in the NW industrial area. Their brewhall is simply wonderful – in an out-of-the way location, but they have excellent beer and food, especially for vegetarians.

After Lisette and Naomi arrived at Sasquatch, Nikki and I headed out together for leg 5, heading to Produce Row in SE PDX. I forgot to use the bathroom before we left, so as we headed through the industrial area, I had my eyes peeled for a convenience store. Before long, I saw a placard in front of a business with some prices listed, so we decided to check it out … not a convenience store – Slabtown Cannabis Proprietors! But, when you gotta go you gotta go, as Annie says. Fortunately, the employees and customers were not only welcoming, they were really interested in the race and suggested a few other nearby breweries. The looks on our teammates’ faces as they drove by exactly as we exited the building were priceless. 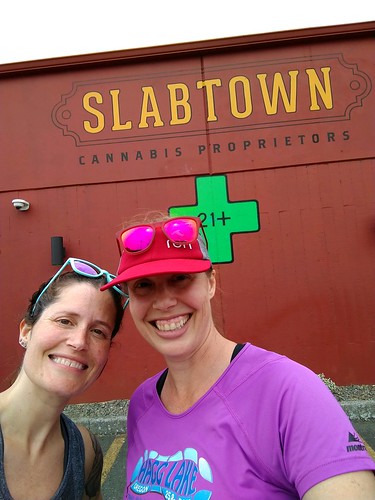 An impromptu bathroom stop and our relay-required photo of a mural, courtesy of the fine folks at Slabtown Cannabis. (Nikki and Kelly)

Leg 6 took Lisette and Naomi back to Vagabond Brewing, where the party extended from the brewhouse through the parking lot all the way to the finish. The rest of us got there well ahead of them, so we gathered our goodies (a pint glass and beer voucher) to re-fuel while waiting for our teammates to arrive, watching folks playing cornhole and admiring team costumes. As with most relays I’ve run, I rarely remember to check the time when someone starts a leg, so we played the game of guessing what time they’d finish, decided we had at least 10 more minutes, and settled on the ground right when they came in, smiles on their faces.

We took a few pictures outside (there was a cool photo station set up), enjoyed our Vagabond beer, and decided that we needed to definitely get the band together again the next time we were all free for the next Gorgeous Relay.

Next up on their schedule is the Gorgeous Hood to Hood Relay on Saturday, June 9; followed by the Gorgeous Wine Country Relay on July 14! 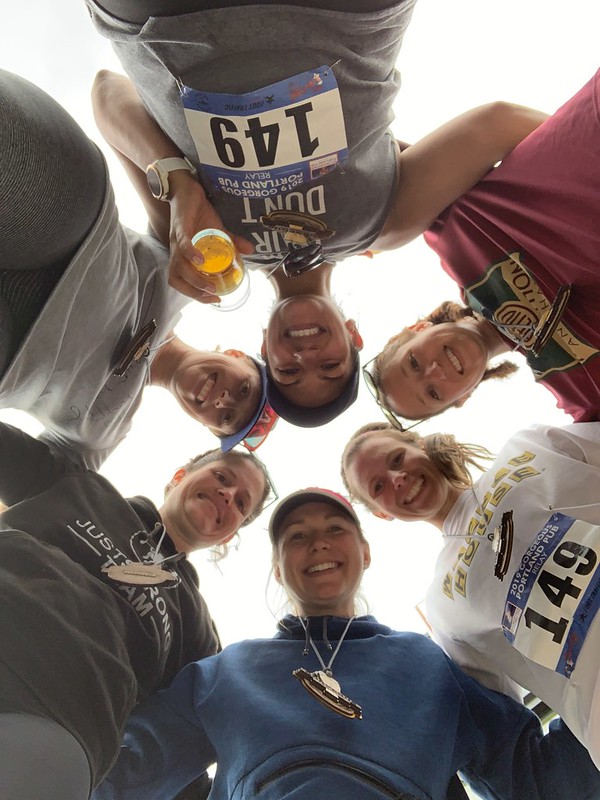