I feel weird when I don’t wear a hat running. This started back when I decided to grow out my bangs (I know) and hated the long wisps getting in my face. I’m also (thanks, Ancestry.com) 100% ginger, so hats afford me some sun protection. My hat collection has grown over the years as I’ve gotten hats from running clubs, races, and random events my company sponsored, but I’ve rarely bought a hat because I never really found a hat I had to have … until Kea Peak. 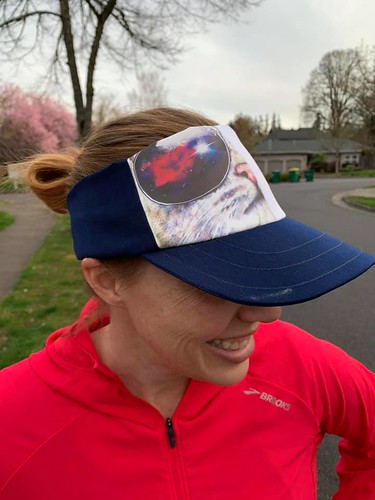 This visor lets you rock a bun or pigtails and stay cool while you run. It also has a cat wearing aviators and looking at the cosmos, but I digress. Get your Space Cat visor here (or whatever style speaks to you) and use code RUNOREGON for free shipping.

The company Kea Peak is based in Reno. It was founded by Abby Morton, a woman with an Oregon connection who has made it her mission to build a company where women are supported. Her business model is based on an encouraging woman-centered working environment and she always has at least one labor position open for a displaced or abused woman looking to build a new life. “This means I have a worker that will call-in more frequently and will need additional counsel, care, and training, but those women mean more to me than my hats,” says Abby. It’s the kind of company you feel really, really good about shopping with. And they make super comfortable running hats that let you #freethebun!

Because the visor has a wider strap than most visors, you don’t have to wear it as tightly to keep it in place, which is one thing that bugs me about some visors. That wide strap was the brainchild of Abby, who liked the look of new trucker-style inspired running hats but always wore visors because of her long hair and because many trucker-style running hats just aren’t comfortable. So she literally cut the top off a hat when she lost the visor she’d planned to wear for a race, and realized the design was perfect for running.

Abby lived in Beaverton for four years while her husband was in pharmacy school, and her favorite place to run was at the Tualatin Hills Nature Park near Nike. “I would just make loops and loops in that little forest forever,” she recalls, noting there’s nothing like it in Reno. “Sometimes I would run with my 9-year old son and we’d stop at every newt and slug to say hi.” Her one and only marathon was the 2012 Portland Marathon, and she’s training now for the Silver State 50/50 trail half marathon in May.

The sweatband around the visor is soft and can be adjusted to just the size you want. What’s also nice is that if you get a trickle of sweat on the crown of your head, you can reach up and scratch it without having to take off your hat or try to satisfy that itch through a running cap. There’s just something about the way they fit that is different from every other hat or visor. Specifically made for running, the materials are all super comfy and wash well (like most hats, it’s recommended you hand wash, especially the hats that have screening).

I was curious as to how she went from being a runner that loved trails to actually designing and producing these visors. Abby had no background in sewing or hat design, but when the idea came to her, she just couldn’t stop pursuing it. “I learned all the technical stuff from good old Google – and my husband taught me to thread the sewing machine. I just started making visors. I made at least 60 visors. Every other day I felt like I was gaining ground and then the next day I was back to square one with new problems. The fabric and color is one thing, and I have graphic design experience for that, but then you have to realize I’m creating a hat shape that’s never been done before. It needed a whole new sewing pattern and an amateur had to be able to make it. One of my biggest advancements came when I sewed the visor top upside down, and it fit better.” She credits failure and perseverance for getting Kea Peak to where it is today.

These hats are made in small batches, so run on over to the Kea Peak website and see one you like, snatch it up now. Prices vary, but most visors are $33 or $36. In addition to the Space Cat (pictured), I did some runs in the Moab Trail Runner, which is also super soft and has only the Kea Peak logo and the word “run” screened on. I found myself saving the Space Cat hat for group runs because it’s such a conversation starter, while I favored the Moab Trail Runner for my longer runs because it’s got a little more stretch. You can find the newest designs on Instagram (@keapeak), sign up for the Kea Peak Perks newsletter (click on “Get Perks” from the website), or just check out what’s new on in their online store.

Along with Abby creating what she would personally like to wear on the trail, her fashion-savvy assistant “puts some flare in [Abby’s] granola palette.” She bounces ideas off women from other walks of like and sometimes just tries a design out to see if people like it. “When you make small batches locally you really get to be as creative as you want to be,” she says.

I would argue that any of their designs would look great on men or women, but I can see how some runners might not agree with me on just how cool the Space Cat design is, so to give you an idea of the variety, here’s the Forrest: 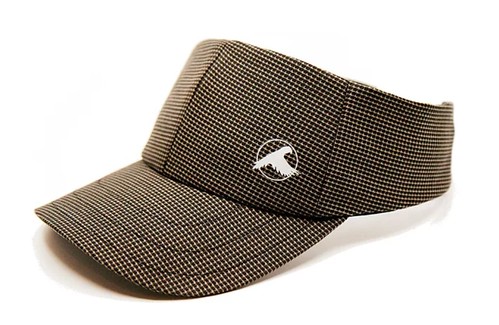